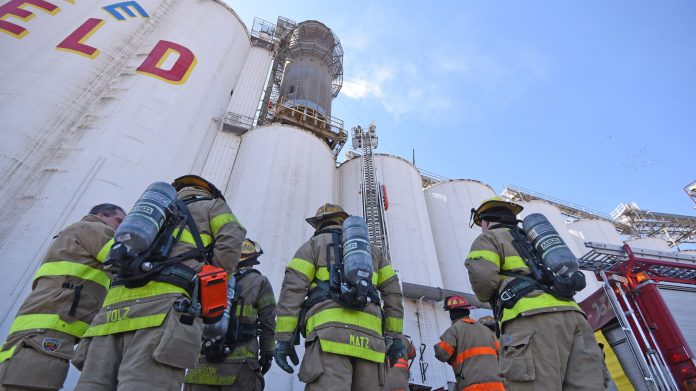 A PSA done by the Ohio Department of Health used mousetraps and ping-pong balls to illustrate the importance of social distancing has gone viral.

MANSFIELD – The Mansfield firefighters union is criticizing the city’s decision to eliminate “non-emergency” overtime, which has resulted in the temporary closure of one of the city’s five fire stations for the last two days.

Station No. 2, 35 N. Brookwood Way, was closed Saturday and Sunday after Mayor Tim Theaker, facing a projected 20% loss in revenue due to the coronavirus pandemic, ordered the fire department to reduce overtime, which he said has been costing the city $80,000 a month.

As of Thursday, the 92-person department ceased “backfilling” positions, where firefighters and paramedics were called to fill in for others who were out sick or on vacation, so that at least 19 personnel were on duty across all five stations.

In a letter released Saturday, Scott Miller, president of the International Association of Fire Fighters (IAFF) Local 266, wrote that any cut or reduction in staff on duty “will have a domino effect” on the city.

“If there is not an adequate number of firefighters and paramedics at each fire station, resources from the other fire stations around the city will have to respond to the emergency which ultimately leave the area/district they vacated less protected as well,” Miller wrote.

The novel coronavirus pandemic makes the decision to cut overtime all the more “frustrating and counterintuitive,” he said, adding that personnel have taken additional precautions, such as using more protective gear to keep themselves and the residents of the city safe.

“We don’t send our firefighters back to the station while your home is still on fire or filled with smoke and the city should not be cutting fire department resources during a pandemic,” Miller wrote.

More: Many in Ohio are rebelling against health orders from Gov. DeWine, Dr. Acton

Mayor Tim Theaker has defended his decision, saying it will save the city money and prevent layoffs, which other Ohio cities have turned to as income tax collections plummet. In a phone interview on Thursday, he said it costs the city about $1,000 a day to have the fire department cover someone who’s out.

“If we have to lay off other individuals or lay off firefighters or police officers because of the lack of funding, then it’s not going to be a short-term, one day here or one day there, it’s going to be a permanent closure of stations,” Theaker said at the time.

Lori Cope, safety-service director, wrote on Facebook Sunday that the mayor and his administration are meeting Monday to format a request to use the budget stabilization fund, or rainy day fund, in whatever manner city council will agree to, in order to address this issue.

The Mansfield Fire Department will temporarily close stations if there are less than 19 personnel on duty across all five stations. (Photo: Monroe Trombly/News Journal)

Miller, acknowledging “unprecedented times,” argued in his letter that the first step in shoring up the city’s finances should not be “to cut the services that people rely on to keep them safe, especially as those professionals are battling the pandemic on the front lines.”

“We look forward to working with the city administration to find ways to avert these cuts and keep firefighters and paramedics at the fire station with a full team, ready to respond when our citizens call for help,” he wrote.

This is The Wildest Chevy Colorado Out There

Illinois police agencies has spent $4.7 million in military gear since...