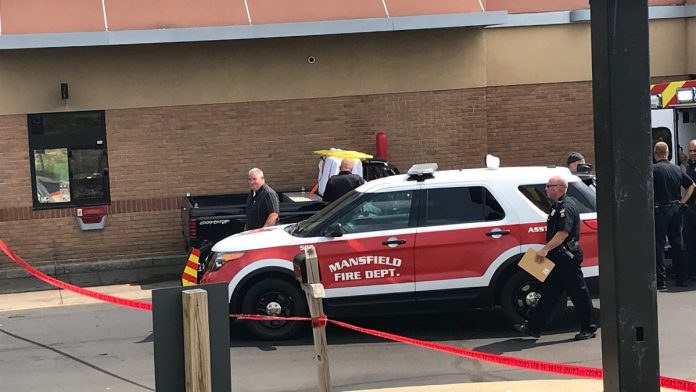 MANSFIELD – A 69-year-old Mansfield man was pronounced dead Wednesday afternoon in his pickup in the drive-thru lane of McDonald’s, apparently after getting caught between his vehicle and a pole.

Bob Ball, a Richland County coroner’s investigator, said the man was identified as Gary McQuillen, 69, of Mansfield. The cause of death is pending an autopsy.

Mansfield police and firefighters were on the scene at the North Trimble Road McDonald’s early Wednesday afternoon, roping off the property near the drive-thru with crime scene tape.

According to a news release from Mansfield police Capt. Shari Robertson, at 12:27 p.m. police responded to an injury crash at the McDonald’s restaurant, 540 N. Trimble Road. First responders found the driver of a 1995 Ford F-150 pickup truck unresponsive in the drive-thru area of the business.

The victim was injured after striking a steel post while in the drive-thru lane. The victim suffered injuries to his upper extremities and was pronounced deceased at the scene. No other occupants were in the victim’s vehicle at the time of the crash.

At the scene, Mansfield police Detective Rob Skoprits said preliminary reports indicate the man may have dropped some change outside of his black pickup, opened up the door and reached out to get it, then got caught between the vehicle door and a pole.

“That’s just preliminary what we’re thinking. Until the autopsy is done we won’t know the cause of death,” Skropits said.

There was no indication at the scene that alcohol and/or drugs were a factor in the crash and toxicology results will be pending an autopsy. No additional information is available at this time as the crash remains under investigation, Robertson said.

Anyone who may have witnessed the crash and was not interviewed is asked to contact Mansfield police at 419-755-9724 and ask for Sgt. Paul Lumadue or a shift supervisor.

Truck smashes into bus in north Sudan, killing at least 13...