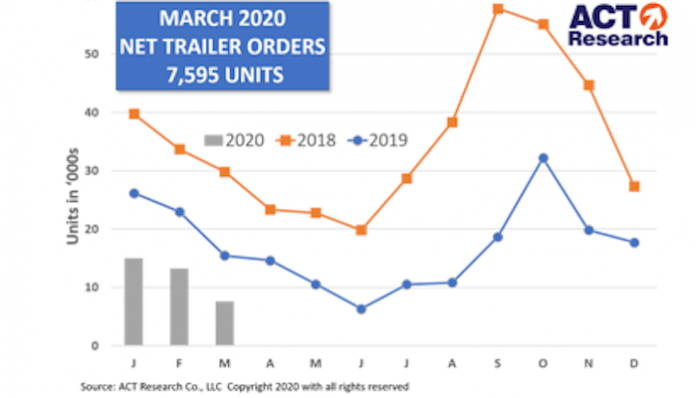 March net trailer orders in the U.S. of 7,600 units were down 43 percent month over month and 51 percent below March of last year, according to ACT Research’s State of the Industry: U.S. Trailer Report.

“The conservative investment posture of fleets continued into March,” says Frank Maly, ACT director, commercial vehicle transportation analysis and research. “As sobering as the figures are, they reflect pre-COVID market conditions and, with more than 40 states under some level of mandated shutdown for most of April, those numbers will be even more significant.”

Before accounting for cancellations, new orders in March of 13,200 were down 14 percent compared with February, the report states.

“The most obvious March impact was a dramatic reversal in dry van order activity, with new orders weak and cancellations surging. Fleets are operating in a bifurcated market; those transporting critical materials are unbelievably busy, while non-critical carriers are on the sidelines, and the former knowing the surge will eventually pass and a quick drop in volume will follow,” Maly says.

“Expect investment plans to suffer as we move through Q2, with one fleet segment not needing equipment and the other unwilling to make a long-term decision based on short-term and unsustainable conditions,” he adds.