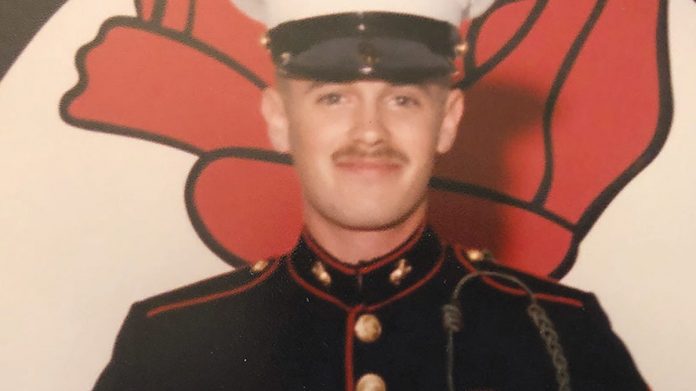 This is the second installment of an interview with Marine veteran Justin Horsman, which Joe Todd conducted on Feb. 11, 2020, in Ochelata. It has been lightly edited for length and clarity.

(Interview picks up with Horsman’s deployment to Somalia.)

Todd: From Camp LeJeune, where did you go?

Horsman: From Camp LeJeune, I went to Somalia; Mogadishu, Somalia.

T: How did you get there?

T: Where did you board the Inchon?

T: When you were on the Inchon heading out, what were you thinking?

H: I don’t know. They told us we were going to a place where a couple of Blackhawks went down. We were supposed to go on the normal six months and do a little training while you are out there. They changed our mission two weeks before I left and decided to send us to Somalia. Our job was to extract the Army out of Mogadishu, get them on C-130s and get them the hell out of Mogadishu. I didn’t know what I felt. They started training us in things they had never trained us before.

T: How was the training different?

H: Fire the M-16, drop the magazine and reload and keep firing. They were teaching us little things, pop your magazine out and put it in your flack jacket. That way you have a magazine to reload. Just little idiosyncrasies like that. They were not sending us to go out with what we have on; we had to be prepared to salvage things and be able to survive.

T: How long did the trip take?

T: How did you pass the time on the trip?

T: How did you receive the classified material?

T: When you were on the ship, how long was your watch?

H: It seemed like every other day I was on post at some point for four to six hours.

T: How many hours off?

T: What did you do in your off time?

H: Wrote letters home and squared away my gear and made sure my uniforms were good. We played cards.

T: What were you told to do in case the ship was in trouble and sinking?

T: What did you do in Somalia?

H: In Somalia, most of the time, I was couriering classified material to the CIA. I was providing an armed guard security for the perimeter. Most of it was guard duty, but we were on alert all the time because of the many factions. This was when Mohammed Aidid ran the country. There was gunfire constantly coming over us. They were fighting each other and it was landing on us.

T: Were you in the UN compound?

T: Where was the compound located in Mogadishu?

H: It was right on the coast.

H: No, it was just the UN compound. There was a Pakistani Stadium by the compound. It was down the stadium a ways and it was a huge stadium and that is where the Pakistanis stayed.

T: Why were the Pakistanis there?

H: They were part of the UN.

T: What was your average day there?

H: Horrible. We were shot at most of the time. I remember one distinctive time, I was delivering some classified material to the CIA and I had to lay down in the back of my HMMWV with my escort because it was classified material. There were days I was in back of the HMMWV transporting that stuff. Providing security on the machine gun. If fire starting pouring into the UN compound, we had to react to it. Not good days.

T: How many factions were in Somalia?

H: There were two main factions fighting for control of Mogadishu.

T: Who were they?

H: I don’t know. Aidid’s faction was the primary one defending the city and there were little onsets of combatants trying to push their way into the city. Aidid was the biggest problem because he took over all the food shipments. Somalia is right below Ethiopia and we were trying to transport food to them, and the enemy factions would line up and just take it away. Rules of engagement said we could not be involved. They would shoot civilians and shoot anybody trying to get to the food. We were not allowed to get involved.

T: How often were you allowed to go off the UN compound?

T: What would you do when you went off the compound?

H: You watched your ass and watched your best friend’s ass. Anything came secondary. Obviously, you had something to do when you left.

T: Why would you go off the compound?

H: You had to transport stupid paperwork or resupply the people that were embedded in Mogadishu. They had certain buildings they were in control of and they had perimeters around them. They had FOBS, forward operating bases, out there. We only moved from there to there.

T: How far were the bases?

T: How many would go?

H: A minimum of three, but probably four or five.

T: How many different nations were in the UN compound?

T: Are there different tribes in Somalia?

T: Did they get along together?

H: They don’t. The warlords basically run Somalia. Most of the tribes just want to be left alone. This is my understanding, I have no first-hand knowledge of what the different tribes were or where they were located. You talk about food shipments from the UN, the warlords were the primary aggressors. They would rather wipe out an entire village than let a bowl of rice go into it.

H: Oh, yes. We had contracted workers. We had kids and in the MREs we had Chiclets, a package of two pieces of gum. I would save all the Chiclets the guys didn’t eat and I would give them to the little kids and they would be all around me. I had to push them back and I ended up throwing the Chiclets and the kids would chase after them. We had the trash people come around, collect the trash. I remember one day, I was sitting there drinking coffee and the trash truck came around to pick up the trash and something fell out. I thought it was no big deal. My buddy and I were drinking coffee. He said, “Did you see what fell out?” It was a burnt crisp body they had picked up outside the compound before they came in to get our trash. They threw him back up in the truck. It is a totally different world.

T: Did you have trouble with booby traps?

H: No. IEDs were always a problem and you were always looking out for them and I am still paranoid today about them, but I never personally hit one.

Amazoox, TuSimple seeks $250M and the next e-scooter battleground – TechCrunch