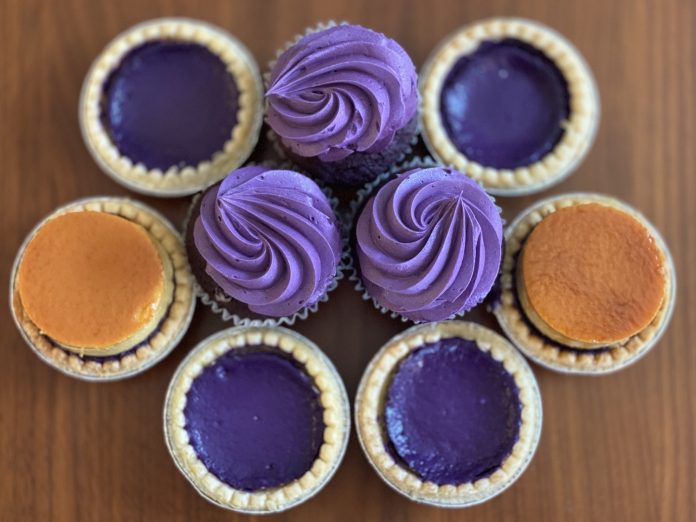 Ube has taken off amongst food lovers in recent years. Two years ago, when Marley’s Treats was invited to be a part of Ube Fest — a festival dedicated to the tuber at SoMa StrEat Food Park in San Francisco — tickets for the one-day event sold out within hours, so that the festival organizers were compelled to add another day. (This year’s festival would have taken place this weekend).

Many diners in Asian and Pacific Islander communities are already familiar with ube and its creamy, slightly earthy and overall subtle flavor, but desserts made with the eye-catching root vegetable have amassed new fans through appearances on social media, especially Instagram.

Ube’s color is especially appealing to many new customers, Ballesteros said. “A lot of people have come to the truck or the store and ask, what is ube? We’ve had a lot of people who say they have no idea what it is, but want to try it because they’ve seen it all over the internet.”

Asian and Pacific Islanders are the fastest growing immigrant group, and in California, Filipinos are the largest among the API demographic. It’s no wonder that Filipino chefs and flavors would eventually become more mainstream.

“Growing up, everything my grandma cooked, and my mom cooked, all the desserts were ube or turon flavored,” Ballesteros said. Turon is a fried banana and jackfruit dessert, and Marley’s weekly rotating cupcake menu sometimes includes a turon cupcake.

For this dessert, a miniature ube-flavored cheesecake is stacked with a leche flan (Filipino caramel custard) on top. Marley’s leche flan recipe is from Tobias’ family, who are also from the Philippines. The two layers are meant to be eaten together. While it may sound like the combination might be overwhelming, they actually work in harmony, as neither of the two desserts are overpowering in flavor, nor are they too sweet. Even the its richness is manageable due to its smaller size.

Ballesteros is the mastermind behind most of Marley’s sweet creations, but Tobias and her younger sister, Geena, also contribute. Previously a receptionist at an MMA gym in Daly City, Ballesteros started baking after she had her daughter, Marley. She’d create sweet treats while her baby was napping and post her finished creations on Facebook. Soon, word of the home baker’s talent spread.

“As soon as I started doing recipes and I posted on my Facebook, that’s when friends and family said can you make this for me on this day? Word spread that way,” Ballesteros said.

In 2016, Ballesteros opened a Marley’s Treats storefront in Oakland on Market at Arlington streets. The store closed, and Marley’s Treats became a food truck business in 2017. Ballesteros and Tobias continue to use the truck, which is sometimes parked near Jack London Square in Oakland, but they were interested in having a brick-and-mortar space again. They eventually found a space in Hayward, and opened a new shop Feb. 1, a little over a month before shelter-in-place orders were enacted.

Their grand opening was a big block party, and soon afterwards, orders took off. But when mid-March hit, Ballesteros said she got cancelation after cancelation.

“A couple of weeks in, we had to change everything because of corona,” Ballesteros said. “I got email after email canceling everything we had booked up until November.”

Weddings, debuts, cotillions and quinceañeras were canceled. As were corporate catering jobs for tech companies and office parties. And of course, NorCal Night Market, FoodieLand, and other big food truck events.

Like many other food businesses in the Bay Area in recent months, Marley’s Treats transitioned to takeout and online orders, announcing schedule updates on Instagram. Currently, Marley’s offers delivery to several Bay Area counties during the week, including to Alameda and Contra Costa counties on Sunday. The minimum order for delivery is $50, with a $10 delivery fee. Otherwise, sweet seekers can stop by the Hayward shop Thursdays through Sundays for pre-order pickups and walk-ups until items run out.

It’s been a roller coaster for the business, Ballesteros said, but, they are managing. “We’ve made it work one way or another.”

Marley’s Treats delivers during the week to different counties each day. Order via email. The Hayward shop is open Thursday 2-7 p.m.; Friday and Saturday noon to 7 p.m.; and Sunday noon to 5 p.m. Check Instagram for upcoming truck appearances.

Oklahoma father charged after his 2 children found dead inside hot...