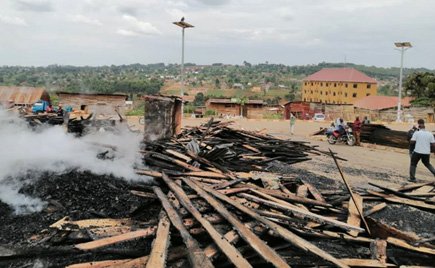 BY MALIK FAHAD JJINGO
Timber and furniture dealers located on Buddu Street in Masaka City are counting losses after a Sunday morning blaze that left most of their property destroyed.

The fire whose cause has not yet been established, reportedly started in the wee hours of Sunday, destroying timber and furniture shops located along Buddu Street.

Ms Takiya Namanda one of the owners of the burnt shops was rushed to hospital after collapsing on getting information that her shop had been gutted by the fire.

The traders blamed police for not doing enough to fight fire since they are not well equipped.

Andrew Kasagga one of the affected timber dealers says that although they called in the police on time, they were not well equipped to put out the fire, thus making the damage even greater.
He said that the two fire trucks the police have been using to combat the fire are too old and they share one tube which they have to keep changing from one truck to another making the work tedious.

The timber dealers have asked government to come to their rescue and give them some financial support because they have lost everything and they will have to start from scratch.
Anthony Muleme another affected timber dealer says that he is yet to assess how much money he has lost in the fire because his entire shop was reduced to ashes.

“How can an entire regional police have two old fire fighting vehicles, they can no longer help in saving people’s property in case of a fire outbreak. We ask the police authorities in Kampala to support Masaka police with another truck otherwise we will continue to suffer in case of any other outbreaks,” a frustrated Muleme wondered.

Masaka regional police spokesperson Muhamad Nsubuga said that police with the help of traders and residents managed to stop fire from spreading to neighboring buildings though most of the furniture shops and timber have been ravaged.

He said an investigation into the cause of the fire has kicked off and a report will be issued upon completion.

Inside the Launch of VENN, the New 24/7 Gaming-Lifestyle Network Built...