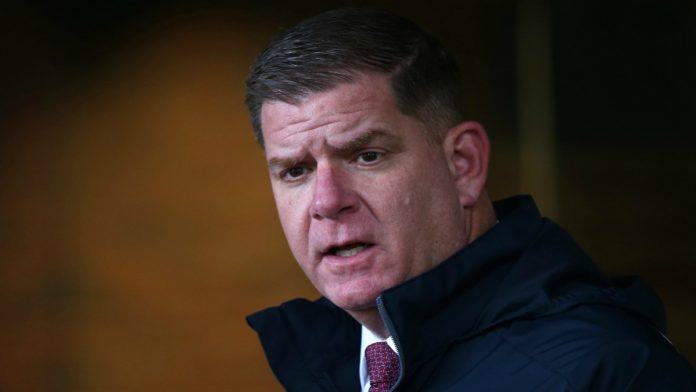 Boston Mayor Marty Walsh announced a new initiative Tuesday that will allow food trucks to visit neighborhoods across the city over the summer.

“This Friday we’ll launch our 2020 food truck initiative,” Walsh said. “For the first time ever, food trucks will be heading to our neighborhoods.”

Historically, he said, the food trucks have been associated with downtown locations and special events.

The summer pilot program will establish 23 food truck sites across the city, including parks, playgrounds and other public spaces. The program will be open to food trucks already approved by the city. They will be allowed to operate between 12 and 7 p.m., seven days a week.

As with outdoor dining and the city’s “Healthy Streets” initative, Walsh said the food truck program “is another way we are looking to be more innovative here in the city to support small businesses and provide new amenities to our neighborhoods.”

More information on the specific locations will be available at boston.gov/reopening on Friday.

Walsh also said Tuesday that the suspension of the ban on plastic bags in grocery stores will remain in place through the end of September. But he added that the city’s health commission has said reusable bags are safe and residents should feel free to bring them to the store.

“This allows a transition period for stores to use the bags currently in stock,” he said.

The mayor also said that starting July 23, Boston City Hall will reopen for in-person appointments on Tuesdays, Thursdays and Fridays. Residents can call 311 to schedule an appointment. But he said the city is not ready to start hosting public meetings at City Hall or in other city buildings at this point.

Download our free mobile app for iOS or Android to get the latest breaking news and in-depth coverage of COVID-19.

Boston entered Phase 3 of the state’s economic reopening on Monday, a week after most of the rest of Massachusetts, allowing museums, movie theaters, historical sites and gyms to reopen with certain restrictions.

The New England Aquarium and Isabella Stewart Gardner Museum are among those expected to reopen this week.

Walsh urged residents Tuesday to continue to take the necessary precautions to prevent having to roll back the reopening of the city’s economy.

“We’ve worked ourselves into a strong position to control our own destiny here in Boston,” h e said. “But as soon as we stop doing what works and taking precautions, we are at risk of moving backward. These first weeks of Phase 3 are critical. Every time you leave the house, I ask you to think about what you’re doing to prevent the spread of this virus.”

Boston enters Phase 3 of reopening on Monday, allowing for more businesses to reopen including fitness centers, movie theaters and museums one week after the state implemented the third phase amid the coronavirus pandemic.

Massachusetts reported just five confirmed COVID-19-related deaths Monday, bringing the total number of confirmed and probable deaths since the beginning of the pandemic to 8,330.

Walsh said Boston reported 50 new cases over the weekend, bringing the city’s total to 13,723. He said the city has been averaging about 16 new cases a day over the past week.

How to Buy a Pickup Truck That Fits You Perfectly