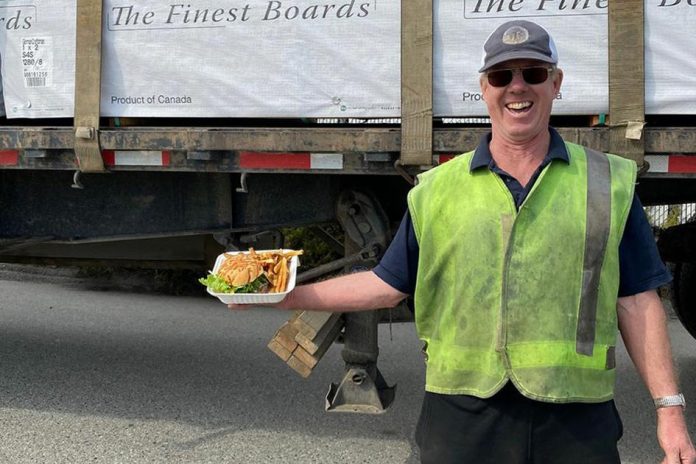 What began as an initiative to make one food truck in Kamloops accessible to truck drivers during the COVID-19 pandemic has snowballed into multiple locations, including two in West Kelowna, to make sure professional truck drivers have a place to stop and eat.

Accessing services such as food is a problem for professional truck drivers at the best of times, said Greg Munden, an owner of a third generation trucking company out of Kamloops.

With sit-in restaurants closed, it exacerbated the situation as restaurants initially didn’t allow for walk up traffic at the drive thru.

The lack of places to eat was creating problems for the trucking sector, which has been deemed essential as drivers deliver groceries to stores and medicine to the pharmacies.

The card lock made sense because drivers stop to fuel up, it’s large enough to accommodate trucks and card locks are typically in good locations.

Chevron agreed and gave permission for food trucks to set up at additional Chevron sites.

It wasn’t long until sponsors, many of whose businesses are dependent on truck drivers, started to come forward offering to pay for drivers’ meals as a way to say thanks for continuing to work and deliver goods.

Munden got the B.C. Trucking Association involved as the interest in locating food trucks in others areas became more than he had bargained for.  While the Chevron card lock in Kelowna has a food truck, there is no Chevron in West Kelowna.

Munden approached the Kal Tire on the Westside as they have a visible location on Highway 97 that services trucks.

For Brandon Kosik, store manager, it was important to give back to the truck drivers.  “We’ve really grown through the commercial customer base,” Kosik said. “Without them, we wouldn’t be where we are today.”

The Gorman Group which includes West Kelowna’s Gorman Bros. Lumber donated $3,000 to launch TNT Dynamite, which was used to provide as many free meals to truck drivers as possible.

“To help in that tiny way was really great,” said Nicole Arkle of the Gorman Group. At the Barry Beecroft Fuels card lock on the Westside, George’s Magic Grill is on site for truckers to get a burger and coffee by donation.

George Fosbery, the man behind George’s Magic Grill, was a long haul trucker for more than 40 years and a former café and mobile food truck owner. He came out of retirement and approached Beecroft Fuels to set up on their large corner lot.

The food trucks are also available for the public to stop by and buy a meal.

The response from the truck drivers has been phenomenal.

“They’re grateful for the convenience, but I think they’re shocked at the show of generosity toward what they do,” Munden said, adding the drivers appreciate having easy access to meals and the number of businesses that have stepped up to thank them, something many have not experienced before.

As well, the public has started to understand the importance of truck drivers.

“If there’s not toilet paper on the store shelves, it’s because the truck didn’t arrive with the delivery,” Munden said.

Meals for Truckers was initially a Facebook page that Munden said “went kind of crazy”. Now, the mealsfortruckers.ca website not only lists the locations of accessible food trucks, it also identifies drive-thru restaurants with walk-up, restrooms, truck-friendly restaurants, motels and hotels as well as tire shops and truck and trailer repair.