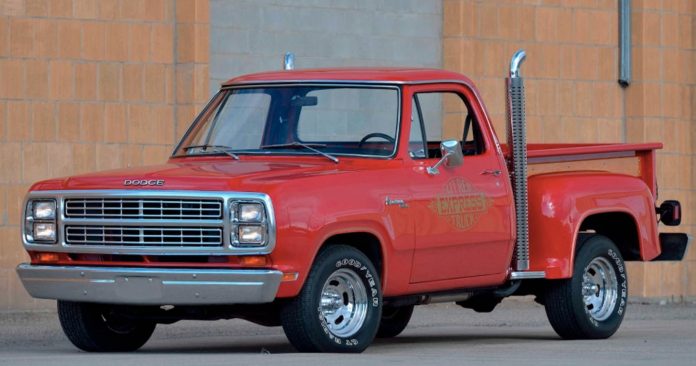 Dodge released the Li’l Red Express Truck in 1978 as part of a limited run of fun trucks that could go out and compete with the world’s fastest cars.

Now that every other truck manufacturer has caught onto the fact that Ford’s F-150 Raptor occupied a market slot all to itself, the pickup landscape has trended towards hardcore trail-blasting and desert-running models like the competing Chevy Colorado ZR2, Jeep Gladiator Mojave, and the forthcoming Ram TRX.

But amid all the long-travel suspension setups, body lifts, and knobby tires, Detroit has largely forgotten about the high-performance street-sport market, which used to be the domain of legends like the Dodge Ram SRT-10, GMC Syclone, and Toyota Tacoma X-Runner. However, the truck that started it all was the Dodge Li’l Red Express, and now one has been listed for sale as part of Mecum’s Indy 2020 event coming in July.

Dodge released the Li’l Red Express Truck way back in 1978 as part of a limited run of super fun trucks that could go out and compete with the world’s fastest sports cars off the line. Instantaneously recognizable thanks to the bright red paint, the exhaust stacks inspired by semi-trucks, and low ride height, the Li’l Red Express was famous for being the fastest vehicle from 0-100 miles per hour—not just trucks, but everything—built in America for the model year 1978, as tested by Car and Driver.

Under the hood lurked a hi-po 360ci V8 with dual-snorkel intakes. Output was rated at 224 horsepower, though there’s good reason to doubt that figure as an underestimation given that a loophole in emissions requirements allowed the pickup to leave the factory without catalytic converters installed.

Today, the Li’l Red Express remains a legend—and a valuable one, at that. Of course, it can be outpaced by most trucks on the market these days, though its combination of style and performance can’t be beaten. This example benefits from bucket seats in the cab, as well as power brakes and steering, plus an AM/FM radio. Unfortunately, it won’t be physically present at Indy 2020 due to being currently located in Canada.

NEXT: Check Out This 2020 Dodge Charger Hellcat Widebody Concept

Torstein Salvesen grew up surrounded by Los Angeles car culture, going to small enthusiast meets and enormous industry shows. He learned to drive stick shift in a 1948 Chevy pickup with no first gear and currently struggles through LA traffic in a 2001 Audi TT 6-speed. These days he mostly rides his bicycle in town and heads out to Malibu or the Angeles Crest Highway for fun mornings in the canyons. He’s written in various media since graduating from UC Berkeley in 2010.