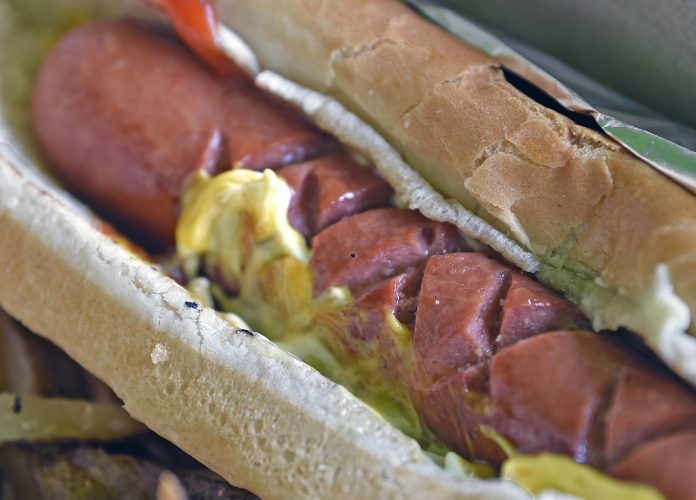 On National Hot Dog Day at The Bazaar on Apricot & Lime, co-owner shares vision of a neighborhood identity

SARASOTA — Saturday was National Hot Dog Day, which is why dozens of locals were streaming to Hamlet’s Eatery before noon. They lined up for the turquoise food truck’s offerings of regular and vegan dogs, the food a welcome addition to an already diverse palate.

“National Hot Dog Day was a fun promotion,” said Kim Livengood, co-owner of The Bazaar on Apricot & Lime, where Hamlet’s recently became a fixture. “Also a perfect fit because hot dogs are a permanent staple on our menu.”

The festivities followed a closure lasting nearly three months as Florida struggled to contend with the COVID-19 pandemic. Livengood emerged from the months away with some fresh ideas.

The Bazaar at Apricot & Lime, which she opened a couple of years ago with her mother, Judy Alexander, stands just down North Lime Street from Burk’s Transmission Service and United Rentals, which leases heavy equipment. In between are vendors of printing, carpet and granite. Multiple garages still populate the area, some in better shape than others.

Maybe, she mused, the neighborhood could use a fresh coat of paint, and a name: The Limelight District.

“The silver lining for us with COVID-19 was that it gave us time to reflect and say, ‘Okay, This is what we want to do.’”

Livengood has never owned a restaurant before, but she is a born adventurer. She spent five years of her childhood on a sailboat with her family, moving with them from St. Louis to Miami, officially starting school as she entered the third grade.

“I’ve always had an entrepreneurial spirit, she said. I started and sold several businesses from a monthly magazine, a boutique hotel and a women’s clothing store. I have my own public relations agency and had worked there in-house for five years prior, the only job when I wasn’t working for myself.”

Livengood has more plans for the Bazaar. An open area across the lawn from Hamlet’s seems perfect for the next big addition. But even now customers seemed pleased with the wide mix of options, drifting between the food truck that stands halfway between a large open porch with tables and a music studio, the entrance to the Bazaar.

Through the back door to the Bazaar and past the recording studio, the visitor faces most of the 30 vendors, no two of them even similar at this point. Scented soy and paraffin candles are the draw at one booth. Bia Antunes began by giving the candles away as gifts, not thinking of starting a business.

A couple of curtains down, a mounted tarpon hangs on the wall like a canvas. That’s what artist Kendal Kiner has made it, along with other former trophy fish she’s splashed with images and color.

A brightly colored woman wearing a surgical mask and stethoscope dominates a kiosk of paintings by Karen Chandler, who painted the same image alongside that of a male physician in a 20-foot mural just off Second Street and Fruitville Road. Completing the commission with the city took some extra moxie for Chandler, who is afraid of heights.

Knowing she didn’t care for ladders or scaffolding, “they gave me a scissor lift,” Chandler said. She set to work creating the images she intended as a tribute to health care workers through the pandemic.

“I thought, ‘This is going to be great,” she said, “‘because I press a button and I go up.’ Then when you get up to the top it would shake, so that kind of flipped me out a little bit. But still anything is better than climbing around scaffolding.”

Alyssa Martin, who helps run the music studio, was out back handing out K&S Kool Cups of Water Ice. Martin, a singer who would handle the second half of the entertainment, loves the “Limelight District” concept.

Asked what “limelight” meant to her, Martin said, “To take the stage and shine and perform, and show everybody what you are made of.”

The Potential Impact of Coronavirus (COVID-19) for Truck & Bus Oil...