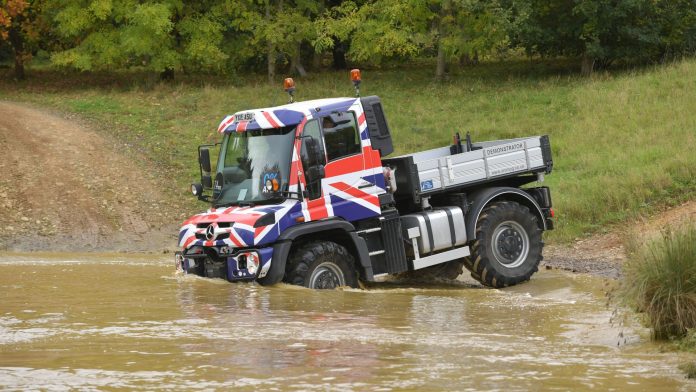 There’s something very cool about driving an off-roader in central London. And I mean a proper off-roader, not an SUV capable of tackling nothing more than a slightly rutted farm track. No, I’m talking about vehicles like the Land Rover Defender, Jeep Wrangler and Mercedes-Benz G-Class.

However, despite being even less PC than a diesel-engined Uber, all are so conspicuous in the capital that they’ll never turn heads. What you need for that is the daddy of all off-roaders: a Mercedes-Benz Unimog.

If you’ve not heard of the Unimog before, it’s about time we fixed that. This is the vehicle you want on your driveway when the apocalypse arrives. It’s a go-anywhere truck, as capable as a tractor but ever-so-slightly more suited to driving in London (in the same way as farmers’ overalls are suited to dinner at Buckingham Palace, admittedly).

In Europe, Unimogs are fairly common. Local councils use them for clearing snow and fixing street lights. One Unimog can do it all; it’s much more versatile than a tractor or a traditional snowplough. But with a start price of around £90,000, it’s not cheap, which means it’s yet to make any real in-roads to the UK public sector.

While Mercedes-Benz is trying to convince farmers of the Unimog’s practicality compared to, for example, a tractor, it remains a bit of an off-road plaything for now. Which is exactly why we went to Millbrook Proving Ground in Bedfordshire to, well, play with one.

Most Unimog buyers opt for the easy automatic option, but I’m chucked in at the deep end with a manual gearbox. It can’t be that difficult, right? Wrong. It’s a semi-automatic, which requires the driver to use a paddle alongside the steering wheel to choose which gear they would like next. Dip the clutch pedal and it then changes ratio for you.

Left can be right

It sounds simple enough, but when you’re driving something the size of an HGV around an off-road course, it feels more complicated than it needs to be. On top of that, there are a variety of off-road gizmos – including no fewer than three combinations of locking differentials and an exhaust brake that can be used to control your speed when descending hills. That’s a lot to concentrate on.

It’s also left-hand drive, but fortunately that doesn’t make a huge difference on a fairly quiet off-road course. You can opt for a clever ‘Variopilot’ system that essentially lets you move the steering wheel and pedals from one side to the other. While there are practical benefits – it might be handy to work on either side depending on the job you’re doing, for example – it also helps at resale time. Left-hand-drive Unimogs are easier to sell because of the larger market in Europe.

So how it is once I’ve got the hang of things? Well, it might be slightly more intuitive than a tractor, but put any thoughts of it being a luxurious, go-anywhere Mercedes-Benz out of your head. It’s definitely a commercial vehicle, with a huge turning circle and unsettled ride.

There’s no doubt that it’s incredibly capable in the rough stuff, however. A wading depth of up to 1.2 metres means, short of the Thames, there’s not much the Unimog can’t traverse. Its huge tyres will flatten any obstacles that get in its way, while short overhangs help when tackling steep hills.

Is the Unimog one of the coolest things I’ve ever driven? Probably. Would I be seen driving one around London? Not a chance. I’ll take a G-Class, thanks.

‘Now is not the time to cry over bread and butter...

Kayaking for Beginners: An Essential Checklist