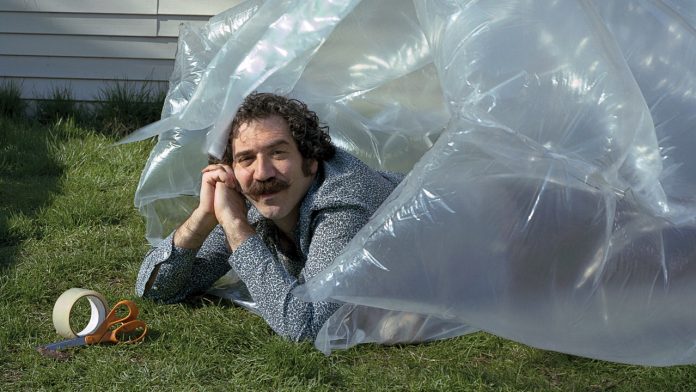 “We came to Kuwait, and the Americans showed us an awful, splayed piece of metal,” he recalled. “I had never seen anything so horrific. This was shrapnel from rockets being fired at us. I looked at that metal, thinking, That is searing through the sky at any moment! In Iraq, I prayed to fire my weapon, just so I could fight back. That’s how bad it got. When we were killing them, I actually felt happy about it.”

“Yeah,” Rakowitz said, in a near-whisper.

With his voice wavering, Taylor described a bombardment on his base, and his growing disaffection with the military mission in Iraq. “Something’s got to change!” he said, suddenly. “Which is why I have had a think, and I am going to give you something.” He ran out, then returned with a small bag containing items that he wanted in the sculpture. “These things haunt me,” he said. “I want to let go of them.”

Rakowitz asked if he should open it later. “You can open it now,” Taylor said, wiping away tears. The apartment rattled as a train passed, and Rakowitz carefully excavated the bag’s contents: flags and other mementos, including a combat medal that Taylor had earned in Basra.

Sensing the importance of the medal, Rakowitz tried to dissuade him from parting with it. “You mentioned that it is a kind of currency for you—” he began, but Taylor interrupted, saying, “I want to spend it now! I don’t want it anymore.” A bit later, he added, “I’m in a boat, doing my best to paddle, but, you know, I can feel healing coming.” Then he smiled uncertainly. “In my own selfish way, I can leave myself by the sea in Margate.”

The next day, Rakowitz took what Taylor had given him to Erith, along with other mementos that he had collected. He carried it all in a large rolling suitcase, which he dragged through the city’s industrial landscape. Brick factories dating to the First World War stood alongside windowless buildings with metal siding. Near a depot for used clothes, the pavement looked like an exploded lost and found.

The White Wall Company occupies an old building with a thirty-foot ceiling. “This was once a cannon factory,” Rakowitz said. He had been working with the company, which specializes in art fabrication, since he was awarded the commission in Trafalgar Square; White Wall had built the lamassu for him, with engineers working out how to keep a large structure constructed out of date-syrup cans from blowing over once it was set atop a plinth.

We entered through a squeaky door. An employee looked at Rakowitz’s luggage. “Did you come straight from the airport?” she asked.

“No, no,” Rakowitz said. “I’m saving on shipping!” A group of people gathered, some with White Wall, some with England’s Creative Coast, a festival associated with Turner Contemporary gallery, which was co-sponsoring the installation. While surveying the polyurethane likeness of Taylor—a seven-piece fibreglass mold was being fitted around it—Rakowitz told the engineers that he did not want the concrete to look polished. He had visited Margate to scout the location, and, he said, “I was very inspired by the chalk that is part of the cliffs in the geology—the calcite. When it went into the water, it was like sea glass. It would become smooth, but also these holes would be carved through it, and I just loved that.” He was hoping for a textured, porous effect. Nodding, a project manager said, “Bubbles would be good.”

Everyone headed for a room holding items gathered from the veterans and from Margate locals who had participated in workshops for the project: a geode that a soldier picked up in Oman, a letter from Gaza. All the objects would be photographed before they were embedded in the sculpture; the photos would be exhibited, along with personal statements, at the Turner gallery. A Turner employee who had run the workshops walked Rakowitz through the stories: one local woman had offered a poppy to mark war traumas passed down to grandchildren. “She went to a mine crater that saw the Battle of the Somme, and every anniversary people scatter these into the crater,” she said.

“This is just amazing,” Rakowitz said, surveying the mementos. “The provenance is what gives it weight.” From his luggage, he produced more things people had given, and some mementos of his own: pearls from Umm Qasr and date seeds. “In Bamyan, one of the stores had dates from Basra,” he said. “I kept those since 2012.” He looked at them. “I am piecing together an idea of Iraq that can only have existed through the stories and the culture that has been transmitted to me.” Parting with the objects wasn’t easy, but he felt that he, too, should sacrifice something. “I’m letting go,” he said.

The Margate project—situated outside the glare of the international art world—came at a good time for Rakowitz. Since 2007, he had been making art about looted artifacts and cultural expropriation, offering a quiet critique of the art institutions that made the removal of Iraqi heritage possible. Then, in 2018, he became embroiled in one of the most overt acts of criticism of a museum in recent memory. Overnight, the glare became blinding.

Early that year, as curators working at the Whitney prepared for the Biennial, they had asked Rakowitz to screen “The Ballad of Special Ops Cody,” and to install Room G, from the Northwest Palace, in the lobby. But then news broke that the vice-chairman of the Whitney’s board owned a company that manufactured tear gas being used on asylum seekers. Employees wrote a protest letter, and Rakowitz, in support, reached out to the curators. “They were lovely,” he told me. They invited him to respond to the issue in his work. Instead, he withdrew from the show, believing that it would remain private. Soon afterward, his withdrawal leaked, and he became a headline. “The Whitney Biennial: 75 Artists Are In, and One Dissenter Steps Out,” the Times reported. Later, other artists in the show addressed the issue in their work, and some threatened to withdraw. By summer, the board member had resigned.

For a time, Rakowitz told me, trips overseas were a welcome escape from the spotlight. But his involvement in museum criticism continued. Returning from Erith, we had dinner at the home of an Iraqi-born artist, Jananne Al-Ani. She owned one of Rakowitz’s pieces, an Iraqi military helmet based on the Darth Vader design, cast in resin and embedded with toy soldiers. He put it on and mugged. But, as the wine flowed, he became sombre, noting that “Return” was under curatorial assault, amid another museum protest. The piece was in a group exhibition at PS1, which MOMA had acquired in 2008. The show, titled “Theater of Operations: The Gulf Wars, 1991-2011,” was designed to explore a country still mired in war. Al-Ani also had a piece in it, a video evoking a drone’s targeting of Iraqi soil: aerial photos of archeological mounds and farms, set to staticky bursts of military radio chatter.

The MOMA protests centered on a board member and trustee, Larry Fink, who had ties to a company that runs commercial prisons. Just before “Theater of Operations” opened, in November, Rakowitz flew to New York and met with Al-Ani and with Rijin Sahakian, an essayist who had contributed to the exhibition’s catalogue. By then, one artist had withdrawn, and Rakowitz was uncertain what he should do. During the meeting, Sahakian mentioned that the chairman of MOMA’s board, Leon Black, headed an investment firm with a stake in Constellis Holdings, which owned the latest incarnation of Blackwater—a company whose mercenaries had fired into a crowd of Iraqi civilians in 2007, slaughtering seventeen people. Constellis was still active in Iraq, she noted, sharing a recruitment ad depicting men firing guns. The text asked, “Ready for your next adventure?”

Commercial Refrigeration Compressor Market to Surge at 221.7 Million units by...