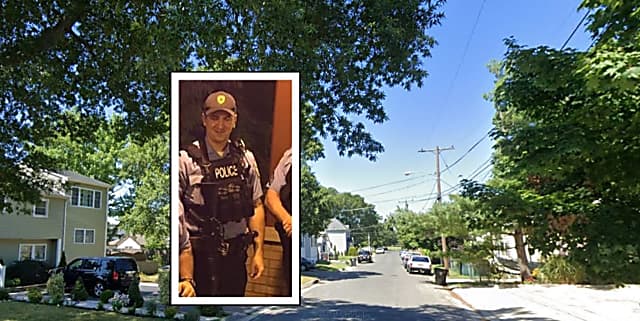 A 33-year-old former Middletown police officer admitted to falsifying the report on an on-duty crash in his police car, authorities said.

Thomas E. Foster was assigned to a road repair project on Cedar Avenue in Middletown July 3, when he crashed into a telephone pole while reversing out of a parking spot, near his home, a few blocks away from the road work, Monmouth County Prosecutor Christopher J. Gramiccioni said.

An investigation found that Foster had actually backed the cruiser into a parked pickup truck on Cedar Avenue, damaging both vehicles, the prosecutor said.

Foster, who has been suspended without pay since being charged last month, entered the guilty plea virtually before Judge Ellen Torregrossa- O’Connor to one count of fourth degree falsifying records on Friday, Gramiccioni said.

In pleading guilty, Foster must give up his position as an officer in his department and for public office in New Jersey, the prosecutor said. Foster is also facing probation, but can apply for the Pre-Trial Intervention Program, Gramiccioni said.

Foster’s sentencing before Torregrossa-O’Connor is scheduled for Sept. 21.

In New Jersey, first-time offenders convicted of a fourth-degree offense are entitled to a presumption of a probationary sentence as opposed to jail time, however, every case is evaluated based on its unique facts and circumstances.

The case is being prosecuted by Monmouth County Assistant Prosecutor Melanie Falco, Director of the Office’s Professional Responsibilities and Bias Crime Unit.

In November 2012, the Monmouth County Prosecutor’s Office, under the leadership of Prosecutor Gramiccioni, launched a Corruption Tip Line designed to solicit the public’s assistance in identifying and targeting corruption, fraud and misconduct occurring in local governmental agencies.

Three charged in triple murder of friends on their way to...