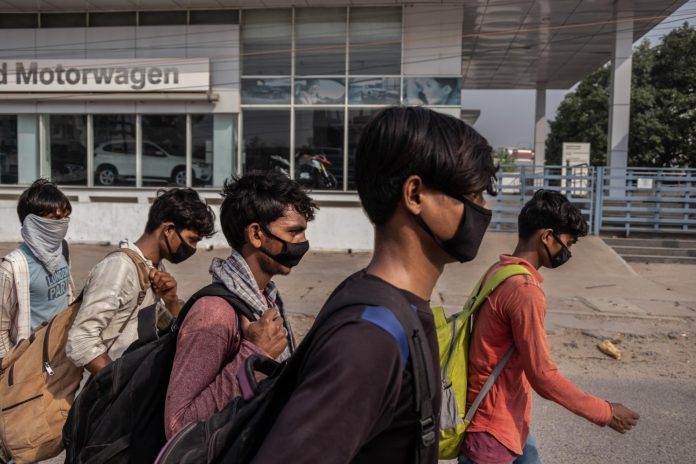 Along the Barabanki highway outside Lucknow—the capital of India’s largest state, Uttar Pradesh—a spring morning finds two men asleep under a tree, limbs askew. One of them lies on a worn-out black throw with colorful stripes; the other sleeps on a discarded white gunny sack, near bicycles with duffel bags attached. Another three men sleep a short distance away in similar makeshift arrangements. Their clothes and hair are gritty, the dirt and sweat from their journey coating their skin.

On April 15, a day after Indian Prime Minister Narendra Modi announced that the country’s coronavirus lockdown would be extended until May 3, the five of them had left Jaipur on bicycles to try to reach Gopalganj in Bihar, around 600 miles away.

The five men shared rented rooms in Jaipur, where they worked as construction workers, earning $4-$5 a day. They had stayed put through the initial lockdown in March, as the government requested, despite losing their jobs. After it was extended, they feared they would run out of food and decided to go back home. (The lockdown was subsequently extended to May 31.)

The men brought with them only what could fit on the backseat of the bicycles. They cycled 370 miles over five days, often through the night, until they were too exhausted to continue. “We slept for just two nights,” said Umesh Kumar, who worked as a mason in Jaipur. “We carried dry snacks and bought and ate cucumbers on the way.”

Kumar is one of an estimated 139 million internal migrants working for daily wages in Indian cities. Many of them are farmers, who become daily wage workers to pay off debts or earn money for seeds and farming equipment. They often work in the informal economy, unprotected by unions and politicians, their wages and benefits left to their employers’ discretion. When the lockdown went into effect, millions were left stranded and jobless.

Since the end of March, when the government closed borders and halted public transportation, hundreds of thousands of migrant workers have left cities despite fears that they’d encounter the police, run out of food or water, or succumb to the searing heat. They walked, cycled, and hitchhiked, often along the only route they knew: train tracks. Fathers carried children on their shoulders, women balanced belongings on their heads, people squatted atop crowded trucks—all determined to find a way home. (Related: Migrant families who walked to the U.S. border from Honduras now face the coronavirus.)

“There were no jobs, no food,” said Amit Kumar, a 23-year-old migrant worker from Bihar. He had paid a truck driver $20—almost four days’ worth of wages—to stand with 108 others in the back of a truck traveling from Aligarh in Uttar Pradesh to Patna, the capital of Bihar. But the police intercepted the truck and placed its human cargo in quarantine at an isolation center in Lucknow.

“It was a very practical strategy to walk home,” said Benoy Peter, executive director of the Kerala-based Center for Migration and Inclusive Development. “They needed to go home because it means a roof over their heads, food, and the comfort of a community.”

But conditions on the journey home are often unsafe. Every day brings reports of migrant workers dying on the road. On May 8, 19 people were run over by a freight train; observers said they were so exhausted from walking that they had slept on the tracks and did not hear the train whistle. Just over a week later in Auraiya in Uttar Pradesh, two trucks carrying migrant workers had collided, killing 27.

Faced with migrants thronging bus stations and crowded quarantine centers, the government started transporting workers home on special trains on May 1, and said in a statement that those workers were observing social distancing and were provided with free water and meals. Textile worker Krishna Mohan Kumar said he paid $11—more than a day’s salary—to return from Kolhapur in Maharashtra to Patna via a government train. But during that journey, workers were left to scramble for food and find their own water, Mohan said.

“During the journey, the authorities dumped the water and food packets near the entrance and everyone fell over each other to grab their share,” he said. “When we ran out of water, we got down and collected water from nearby water bodies.” He recorded a video showing passengers jumping off the train with bottles and trying to fill them before the train started to move again.

As migrant workers reach home, their problems are just beginning. Nearly two-thirds of India’s 1.4 billion people live in rural areas, where the economy has struggled. Back-to-back droughts in 2014 and 2015 were followed by the 2016 cash crisis when the government suddenly banned 80 percent of bills in circulation in an effort to crack down on corruption.

Suicide rates in rural areas are high: According to the National Crime Records Bureau, 10,349 farmers committed suicide in 2018—an average of more than 28 deaths a day. The current influx of migrant workers will only make the situation worse: According to the International Labour Organization, the pandemic could push 400 million informal workers in India into deeper poverty.

“The lockdown and return of the migrant workers are going to create a huge pool of unemployed workers in rural areas,” said Jean Dreze, a Belgian-born Indian developmental economist and an expert on food security and hunger. “The landless laborers and casual workers are the most vulnerable. Their families are vulnerable.”

As of May 6, the unemployment rate in rural India was at 24.3 percent, up from around 16 percent in April. In response to the migrant crisis, the government increased the daily wage rate under the Mahatma Gandhi National Rural Employment Act (MGNREGA)—the world’s largest anti-poverty and livelihood guarantee program—by 26 cents, from $2.39 to $2.65, and invested $5.2 billion (Rs 40,000 crore) to create more work. The act guarantees every rural household at least 100 days of unskilled, manual work a year, and has lifted many rural families from poverty since it was passed in 2006.

But because the work provided under MGNREGA is mostly in land development, irrigation, and crop planting, it typically peaks during May and June, before the monsoon season starts. “So the timing of the lockdown was the worst possible,” says Dreze.

The government has announced a $266 billion fiscal package to boost the economy, which includes $463 million on food for nearly 80 million migrant workers over two months. It is also doubling the amount of grain distributed under the Public Distribution System (PDS), a food subsidy program for the poor launched in 1947. However, it’s estimated that about a million people who lack food won’t be getting any from the PDS. Some lack the correct documentation to procure a ration card because ration cards are neighborhood-specific. When women marry and move to another area, for instance, they lose their ration if their cards don’t transfer to their next address.

“If the government doesn’t extend the PDS and generate more work under the national rural employment guarantee act (MGNREGA) soon, we are looking at a wave of extreme poverty in rural areas,” Dreze said.

And that doesn’t even account for the coronavirus. India has overtaken China in COVID-19 cases with more than 150,000 as of May 27. Since May 1, when the special trains started taking people from cities back to villages, states that are home to the most migrant workers recorded a jump in COVID-19 cases. India’s rural hospitals house only a third of the country’s beds—a ratio of 3.2 beds per 10,000 people—and are ill equipped to handle an outbreak.

“The rural crisis has not yet unfolded,” Peter said. “It is due in the next few weeks, and it might be catastrophic.”

Author
Nilanjana Bhowmick is a New Delhi–based journalist whose work focuses on women’s empowerment and politics. Photojournalist
Saumya Khandelwal, also based in New Delhi, focuses on gender and environmental issues.

Police shot up his alterations shop while chasing a suspect. Now...