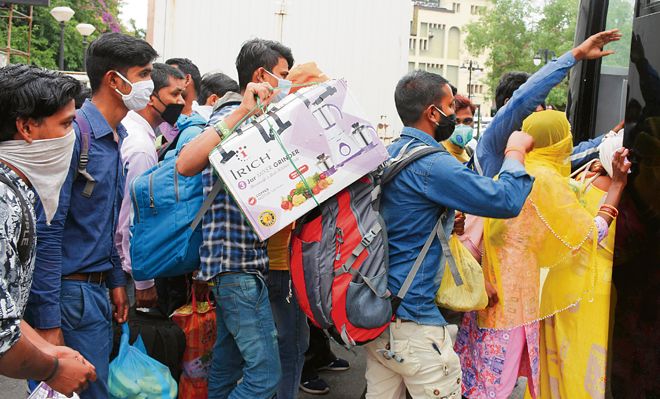 Unable to get a boarding call despite having registered for the ‘Shramik’ train, over 4,000 migrant workers across the city, especially in the industrial belt of Manesar, are willing to pool between Rs 1 lakh and Rs 2 lakh for a truck ride back home.

The Gurugram police have been intercepting such trucks almost daily, stopping migrants from crossing the border through the Kundli-Manesar-Palwal Expressway.

One such truck intercepted last night carried 60 migrants, including women and children, from Bass village. They had paid the trucker Rs 1.5 lakh for a ride to Bihar.

The group claimed they had spent their life savings for the journey. The police turned them away, promising to take up the issue with the authorities.

“I only had a pair of anklets from wedding. I worked as a maid but have had no work for two months. My daughter is not well. I tried going back by train, but they told me it’s for farmers only,” said Reshma Devi.

“We had registered for the train but didn’t get a boarding call. I just have Rs 100 for food. The lockdown is set to continue and we just want to return home,” said Nagesh, a migrant from MP.

On an average, two trucks were being intercepted on the expressway every day, said DCP Deepak Saharan.

Employed in the industrial sector or service industry, these migrants apparently don’t qualify for travel in ‘Shramik’ trains and are forced to make desperate efforts to reach home.

DC Amit Khatri said: “Labourers are being sent out as per protocol, which primarily allows farm labour. The administration is available 24×7 for those in distress. Industrial and commercial establishments have started operations. I urge people not to indulge in illegal exodus.”

Matawalle laments killing of 15 persons by BUA truck in Zamfara,...