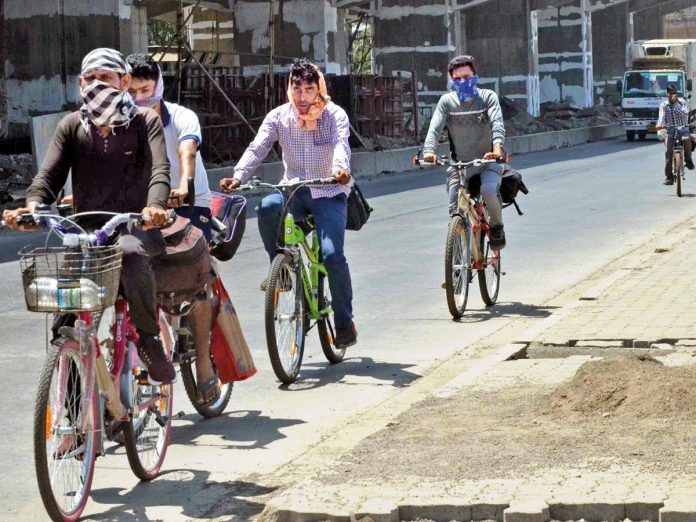 Many of them admit that they are unaware of the process of obtaining permission to travel.

Even as state governments are making arrangements for to return home by trains, many of them are still using ways — walking, cycling or travelling in transport vehicles — that are deemed not only unsafe, but also illegal.

In the wee hours of Thursday, police intercepted three trucks headed for UP during the nakabandi at Gyaneshwar Nagar Junction at Sewri. Suspicious of one of the driver’s body language, cops asked him to remove the black plastic sheet covering the vehicle’s loading area. More than 50 men was holed up inside. Two more trucks behind it were also found to be packed with men.

“In all, there were 160 men, all daily wagers living in Sewri, Reay road and Danabandar. They had each paid Rs 3000 to the drivers. The drivers returned the money to the workers before we let them go,” said senior inspector Sunil Sohani of RAK Marg police station. Four people, including three drivers and a cleaner, have been booked for violating the lockdown, and their vehicles seized.

A few days ago, police had stopped a mini truck carrying 43 men to UP. They were workers living around Pydhonie. The Dharavi police intercepted three vehicles on Tuesday in which 70 migrants were travelling illegally to the same state. Each of them had paid Rs 2000 each to the vehicle owner.

“Most of these migrants had one complaint: That they were unaware about the process of obtaining the permission to leave. And, since they were stuck in the city for a long time, they were desperate to leave,” said a police officer.

In some cases, the labourers had no choice but to travel illegally

In some cases, the labourers had no choice but to travel illegally as there are no trains from Mumbai to their native place. Some of them also complained that the authorities were unresponsive to their plight.

Seven migrants from Jharakhand, who were working at a construction firm in Navi Mumbai, chose to cycle all the way to home. They said they had tried to contact the authorities about their return. When they didn’t get a suitable response, they bought the cycles and set off for home. “We had tried to contact authorities to avail the trains or buses but didn’t get any confirmation,” said Raviranjan Paswan who was part of the group.

Meanwhile, the has complained that West Bengal has not been giving clearances to accept migrants from the state.

State disaster management department’s director Abhay Yawalkar said, “Two trains were planned for West Bengal on May 5 and 6. But the authorities in West Bengal did not give us permission.’’

In an attempt to dispel any misunderstanding, Sanjay Kumar, officer on special duty (OSD) of the rank of principal secretary, told Mirror that the state is setting up infrastructure for these migrants. We need to first test them and then send them for quarantine. This process is time consuming. Also, there are other trains coming from various states. In two-three days’ time we will give the go ahead for the trains from Mumbai.”
Additional inputs from Yogesh Naik, Kamal Mishra and Jayatri Nag

The Daily Dash: When will the freight market bears throw in...