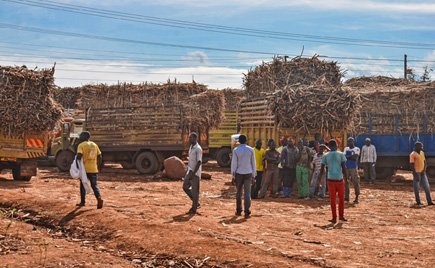 Last month, within a space of seven days, the price of sugarcane dropped from Shs104, 000 to Shs99, 000 per metric tonne, with speculators expecting their value to drop further.

From taking home Shs200,000 per acre after waiting for 18 months for crop growth, to delays in getting a harvesting permit, in addition to an already unhealthy pricing, this is not the best timing to be a sugarcane farmer.

The price of sugar has not changed, ethanol currently commands overwhelming demand and the price of electricity has not dropped.

Mayuge, Kaliro and Kamuli sugarcane mills, unlike Kakira Sugar in Jinja City and Sugar Corporation of Uganda Limited (SCOUL) in Lugazi, do not engage in sugarcane farming.

While sugarcane growing took Busoga Sub-region by storm, the industry is grappling with a surge in the number of brokers in the value chain allegedly through complicity between outgrower officials, politicians and businessmen.

The effect is that a person who is not a farmer can be registered to have blocks of sugarcane, leading to permits being given to middlemen who are usually more aggressive than a typical farmer.

These middlemen then sell the permits to farmers at not less than Shs300, 000 per ten-metric tonne truck.

Mr Vincent Galisanasana, the Kamuli District local council secretary for production, and a mixed farmer at Kiige, at the weekend said some of the most-enduring challenges are looking for buyers, hiring the truck and those to cut, ferry and load the sugarcane.

“At the factory, it is a long, frustrating wait which forces the farmers, most of whom have run out of patience, to resort to middlemen,” he explained.

Ms Sarah Namulondo Kagoya, a sugarcane grower and resident of Namasagali Sub-county in Kamuli District, said sugarcane growing has been a ‘curse’ to the family.

Sugarcane farmers in Namutumba District have attributed the reduction of sugarcane prices to failure by the government to construct a factory for them in Busoga Sub-region.

Mr Christopher Isiko, a 70-year-old sugarcane farmer in Isita Village, Mazuba Sub-county, said there is an urgent need for government to build a factory and separate from established millers.

This, he said, will create a health competition between farmers and millers.

Mr Isiko, like Mr Galisanasana, said millers and middlemen have contributed ‘a lot’ to the reduction of sugarcane prices because farmers are not involved in planning and pricing. He said some middlemen connive with millers.

“The cheating comes in during the transportation of sugarcanes; here, the truck drivers and middlemen overcharge us,” he said.

Ms Harriet Neigesa, a sugarcane farmer from the same village, said it is only middlemen and millers who know the ‘real price’ of sugarcane per tonne and urged the government to bar middlemen from buying sugarcanes.

The chairperson of Busoga Sugarcane Outgrowers’ Association, Mr Issa Budhugo, could not be reached for a comment by press time.

Collusion dilemma
Does the current price drop in sugarcane, therefore, point to a collusion by millers against farmers?

Mr David Kafuko, a sugarcane farmer and retired sugar technologist, said while the millers’ capacity is too low to take the available sugarcane, there is need to understand why they have low capacity yet over the years, they have allegedly been told to increase capacity.

“The bottom line is the millers are arm-twisting the government to accept their terms. They are not happy with the Sugar Bill because it does not go their way,” he said.

It also seeks to replace the Sugar Act (1938), deemed obsolete to no longer regulate the current sugar industry.

“Most millers have not installed the capacity that they have told the government; the question is why doesn’t the government withdraw those licences and give them to those who can do it?” he wondered.

But the chairperson of Uganda Sugarcane Manufacturers’ Association, Mr Jim Kabeho, maintained that the sustained drop in the price of the sugarcane is because supply is greater than demand.

He wonders why focus is on the current reduction in prices yet there have been previous reductions that were not reported.

The focus, Mr Kabeho, was told, is because the current price drop comes after millers increased transport costs, with Kakira Sugar reportedly increasing its costs by Shs5,000 per metric tonne.

On the other hand, transport at Mayuge Sugar Industries is reportedly costing a minimum of Shs400,000 for a 10 metric tonne truck irrespective of the distance, implying that millers and transporters are feasting on the core existence of the sugar industry.

Mr Kabeho, however, described the transport narrative as ‘diversionary’. He said their body is transparent and has a computerised arrangement from when one plants sugarcane up to the harvest time.

“The association deals with advocacy and policy change, while individual companies handle agriculture, safety and health human resources, operations and marketing,” he said.

“We have proposed to the government to open up the power ethanol market as a solution,’’ he said.

Option
In an interview in August, the Madhvani Group of Companies director of corporate affairs, Mr K P Eswar, said Kakira Sugar Works, located about 19 kilometres from Jinja City, no longer makes money from sugar but from ethanol and electricity generated from bagasse since 2005. Many experts now believe manufacturing ethanol should be diversified.

Mr David Kafuko, a retied sugar technologist, said millers need to be regulated and should not have a leeway to do whatever they want. “The government should operationalise the sugar law and we have the sugar board whose composition is okay,” he said.