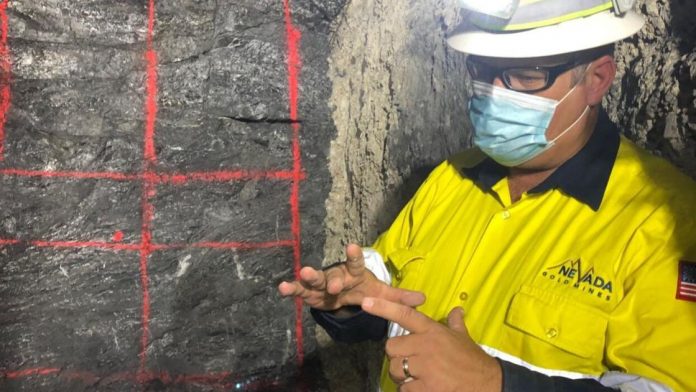 “In Northern Nevada, where we are, the ground is typically fairly weak. We get places that have really good hard ground, too, but in general fairly weak compared to other parts of the world,” he said.

Gonin said the practice of lining a mine’s walls and ceiling with backfill is not used by all mines throughout the world, but in Nevada, a mine must ensure ground stability.

“There are mines in the world that they would look up at us and ask, why would you use that wire, what is that for? They wouldn’t know,” he said.

“We need to use a lot of ground supports, which is the vaults and the mesh and stuff. We don’t get to mess around with that, safety depends on that,” Gonin added.

After leaving the Cortez Underground 3880 level, we made our way to the mine’s Range Front Declines, where we toured the new feeder-breaker system that will allow Cortez Underground to expand its daily ore production from between 3,600 to 3,800 tons to 5,00 tons each day over time.

Gonin said that about 60 feet above the new system, there is a location where ore will be dumped into bins from above. It will then be fed through feeder breakers to reduce its size and then be dropped onto the new conveyor belt system and out of the mine.

“Right now we are using haul trucks to drive all the way out, dump the load and come back in again,” he said. “Once this is up and running we will use the trucks in the mine only, and not need to send them all the way out of the mine.”