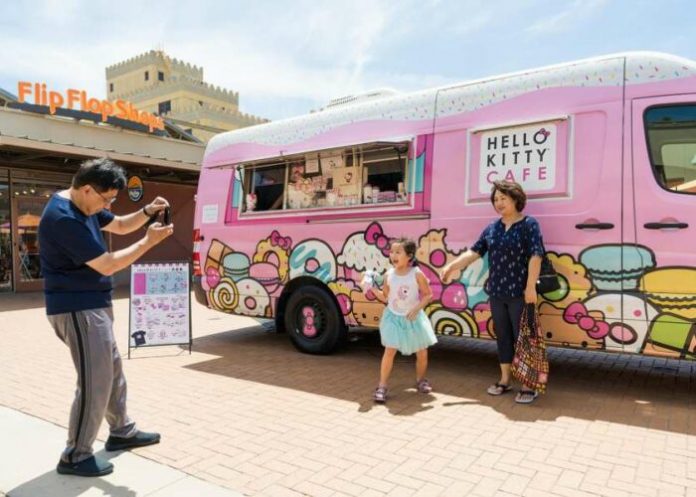 Jessica Ramirez was third in line when the Hello Kitty Cafe truck rolled to The Woodlands Mall last weekend.

After a months-long pandemic pause, the California-based mobile shop revved its engines back up for a Texas tour, which includes a stop at Baybrook Mall this Saturday.

Ramirez, who is in her 30s, is a life-long Hello Kitty fan who worked at the Hello Kitty retail store in the Galleria before it closed a few years ago.

Without a permanent store in the Houston area, she says, “Everybody gets their little fix when the truck comes to town.”

Two Hello Kitty Cafe trucks criss-cross the country year-round, typically stopping in major cities twice each year with new, limited-edition inventory that become collector’s items. The merchandise and desserts can only be purchased physically at a retail store or the mobile concept, creating a fan frenzy.

When Ramirez and her friends arrived at the mall at 7:30 a.m. for the 10 a.m. opening, she had her shopping list prepared. By scanning social media posts from other cities, she knew she wanted a special-edition mug, with Hello Kitty’s signature bow on the handle, to add to her collection of about 70 Hello Kitty mugs.

“It tastes good and it’s cute,” she says of the desserts, which she plans to buy more of when she returns to the truck at its Baybrook Mall stop.

The Woodlands stop was the concept’s first time to experiment with a drive-through line as a safety precaution. Customers waited in a line of cars for their turn, at which point they could step out of their vehicle for photos and shopping.

Ramirez says she knows the drive-through was the safest way to shop, “but it was kind of a bummer. A lot of us like standing around and waiting for hours because we get to know each other and talk about Hello Kitty.”

“We make friends through Hello Kitty — it brings us all together,” she says of the get-togethers.

This time, she had to settle for chatting with other fans via comments on Instagram while they waited.

A new way to shop

Urania Chien is the owner of the mobile concept.

A self-described “super fan,” she launched her business in 2014, after visiting the Hello Kitty restaurant in Taiwan and approaching the parent company with her idea.

In addition to the two touring trucks, she owns the brick and mortar Hello Kitty Grand Cafe in Irvine, Calif.

Her staff was as eager to get back to the tour as customers were to shop, she says. “The energy is quite amazing — it’s just a fun time.”

For now, customers no longer walk up to the truck’s window to browse. Instead, they select their products from a table out front that is regularly sanitized. And, crowd giveaways are on pause.

Nevertheless, “the love has been tremendous for Hello Kitty,” Chien says.

Shopping for products featuring Hello Kitty, along with her friends Melody and Kuromi, allows customers to “relive a little bit of their childhood and make those intergenerational memories” by introducing their own children, she says.

“I think people love reliving that feeling of nostalgia and (unlike when shopping as a child), they’re not really controlled by their parents — they can make the decision of what they want themselves,” she says.

One of those joyful shoppers is Ramirez. As a mom to three boys, she doesn’t have the opportunity to shop for a daughter, but gifts Hello Kitty to the little girls in her life, including her niece for whom she recently bought a onesie.

Ramirez has souvenirs from the Hello Kitty restaurant in California, in addition to Hello Kitty concepts in Times Square and Las Vegas.

She’ll add to her collection when she returns to the truck at its Baybrook Mall stop.

Allison Bagley is a Houston-based writer.

Self-Storage Rooms Coming to U-Haul at Preston Hwy. in Louisville