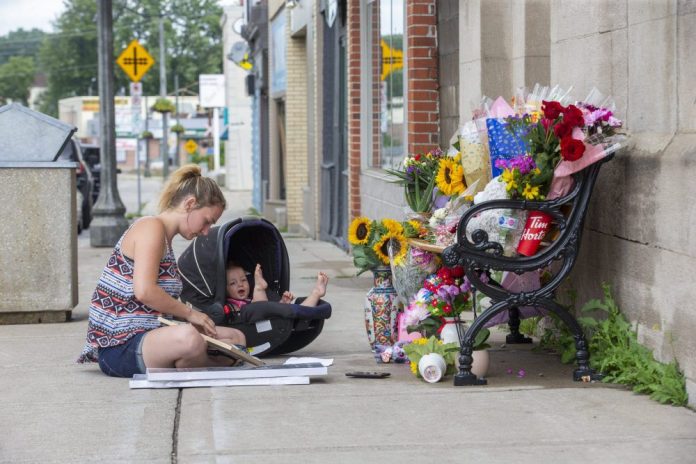 INGERSOLL – A 22-year-old mother of three has been identified as the pedestrian struck and killed by a transport truck crash while pushing a stroller in downtown Ingersoll.

Police identified Ashten Elizabeth Fick, 22, of Ingersoll as the pedestrian in Friday’s crash. Fick was killed in a crash with a transport truck while she was crossing the street at Thames and Charles Streets.

The infant child in the stroller suffered minor injuries, police say. Police have not confirmed the relationship between Fick and the infant.


Ashten Fick was struck and killed by a vehicle as she crossed the street in Ingersoll on Friday July 31, 2020. Derek Ruttan/The London Free Press

Sunday, police made a plea for business owners in the area near the crash to check surveillance cameras for footage of the crash, and ask anyone who witnessed the crash to come forward to police.

A memorial for Fick has been created near the intersection in downtown Ingersoll where she died, with pictures, flowers and stuffed animals. Many of the photos feature Fick with her children.

Ingersoll’s Foodland grocery store has set up a donation fund for the family.

If they wish to remain anonymous, they can call Crime Stoppers at 1-800-222-8477 or submit a tip online at www.oxfordcrimestoppers.com where they may be eligible for a cash reward of up to $2,000.

Meet some of Savannah’s frontline heroes of the coronavirus pandemic