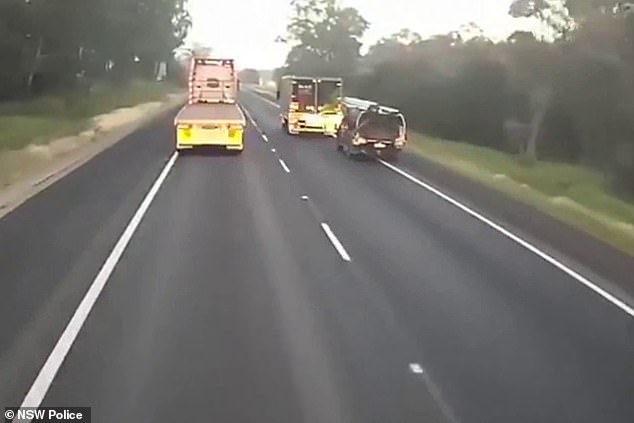 Teen driver angers cops after he’s filmed pulling a risky overtaking move on a busy highway – but is the truck in front REALLY to blame?

Dashcam video has captured the dangerous moment a motorist sped along the edge of a busy highway in an attempt to overtake a truck.

New South Wales Police released footage of the dangerous driving incident on the Hume Highway at Menangle, southwest of Sydney, at about 6.45am last Saturday.

The vision shows a utility and a small truck travelling in the right lane, with the truck failing to keep left and the utility using the fringe of the road to try and get around it.

As the video begins the ute, with large PVC piping strapped to the roof, starts to overtake another utility vehicle.

However the truck in front was also driving over the dividing line, preventing the ute from being able to get past on the shoulder of the road.

For the rest of the video the ute is seen tailgating the truck with the other lane also blocked by a larger truck.

At one point the ute tries again and it appears the truck driver purposely tries to block him at high speed.

It’s at this point it seems to become clear the truck driver is purposely trying to block the right lane and not allowing the tailgating ute to pass.

Traffic and Highway Patrol Commander Assistant Commissioner Michael Corboy said police have since spoken to the truck driver who captured the footage, and are appealing for further witnesses to come forward.

‘This event could have quite easily added to the road toll, which already sits at 116 lives lost on NSW roads this year,’ Assistant Commissioner Corboy said.

‘We acknowledge drivers may experience frustrating incidents while they are behind the wheel, nothing is worth putting lives at risk.

‘Police are always monitoring social media to identify dangerous driving on the state’s roads so that we can take action.’

He said incidents such as these were becoming more common.

‘The fact that we are regularly alerted to these sorts of incidents by members of the public shows that other road users have had enough; they are united with police in their intolerance for dangerous driving behaviour on NSW roads,’ he said. 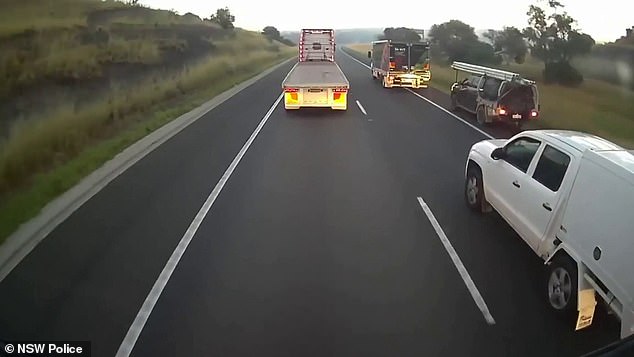 The footage showed the ute continually trying to overtake the truck on the outside (pictured), at one point the vehicles almost collide as the truck veered into the path of the ute