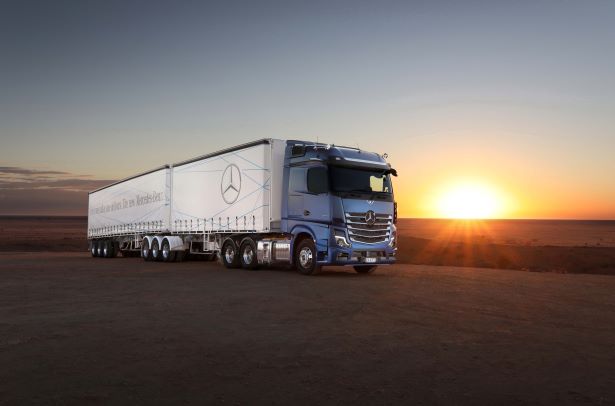 More than Meets the Eye

The New Actros from Mercedes-Benz is loaded with a comprehensive suite of new technologies.

The digital cockpit of the New Actros is only the start of the revolution in driver support aids, with perhaps the most apparent physical difference being the MirrorCam system.

The absence of traditional external mirrors presents a much smoother airflow path with a resultant reduction in drag which benefits fuel efficiency. From the driver’s perspective all round vision is substantially improved, particularly the lateral fields of vision which is most notable when turning right at intersections and negotiating roundabouts.

It is worthwhile for the operator to set the MirrorCam’s ‘orientation point’ when first connecting a trailer or trailers. This can be quickly achieved as part of the pre-drive check and is best accomplished by using an object such as a traffic cone aligned with the rear of the rearmost trailer.

It’s simple to set the graduated bars on the MirrorCam screens to identify zones spaced at 30, 50 and 100 metres from the rear of the back trailer. Readjusting the reference lines when travelling bobtail is relatively straight forward.

The MirrorCam’s in-cab screens are 380mm high and are similar in their proportions to conventional mirror setups and have a wide angle ‘spotter’ in their lower sections.

Camera mounts are hooded to protect from stray light such as in tunnels or warehouses. Vision on the screens is as clear as a household television and the displays are sensitive to the ambient light conditions with automatic brightness adjustment plus manual adjustments if needed.

“As with any new system, the more time people have with it the more comfortable they become with it,” says Andrew Assimo, Director of Mercedes-Benz Trucks.

“As opposed to a conventional mirror, MirrorCam is part of a complete new system. The field of view is massively increased, head movements to look at mirrors compared with screen displays are reduced, the ability to focus on what’s ahead is enhanced and the ability to see what’s behind is improved significantly.”

When cornering the camera automatically follows the field of vision and keeps the end of the trailer in view and tracks the trailer around sharp bends and roundabouts.

Due to its wide-angle lenses MirrorCam confirms its benefits when reversing into the blind side.

As the angle between the truck and trailer decreases MirrorCam continues to follow back of trailer so that the driver’s view is not blocked and the end of the trailer is always visible instead of a mirror full of the side of the trailer.

It is worth noting the driver no longer needs to be a contortionist in order to clearly see what’s happening on the kerb side.

When reverse is selected the MirrorCam system switches to a wider panoramic display and the image follows the trailer based on steering wheel angle input.

After reversing, when a forward gear is selected the MirrorCam remains in this mode until 10 km/h is reached to avoid switching between the displayed images should the driver need to perform some back and fill manoeuvers.

When the truck is parked, especially at night, the driver can safely check the area around vehicle from the comfort and security of the sleeper cab without even disturbing the curtains.
This allows the driver to see down both sides of the combination without anyone who happens to be lurking around even knowing they are being observed.

It’s worth pointing out the PPC plans for what the truck will be doing up to two kilometres ahead by knowing the topography of the road while factoring in the vehicle combination’s weight.
This enables PPC to plan ahead to maximise momentum and optimise gear selection.

It may even drop a gear earlier than what might be expected in order to climb a hill in the most timely and fuel efficient manner.

A conventional cruise control may tend to hold a higher gear because it isn’t aware of the extent of the hill being negotiated. PPC may actually accelerate the truck at the bottom of a climb to improve momentum and result in less overall gear changes which will save fuel.

The Mercedes-Benz Active Brake Assist 5 is the latest development of the system. It utilises radar and high definition cameras to identify other vehicles and moving pedestrians and calculates if a collision is imminent.

The system can autonomously apply partial or full emergency braking to prevent, or reduce the severity of, a potential collision.

“I think there is some real value in Active Brake Assist 5 particularly for operators in built up areas having the ability to stop effectively and autonomously for fixed obstacles and pedestrians,” says Andrew.

Daily life: Taking out the trash

Machete Or Not, Here We Come

42-year-old firefighter is one of the state’s youngest victims of COVID-19...

New US Army infantry vehicle is basically a Chevrolet Colorado