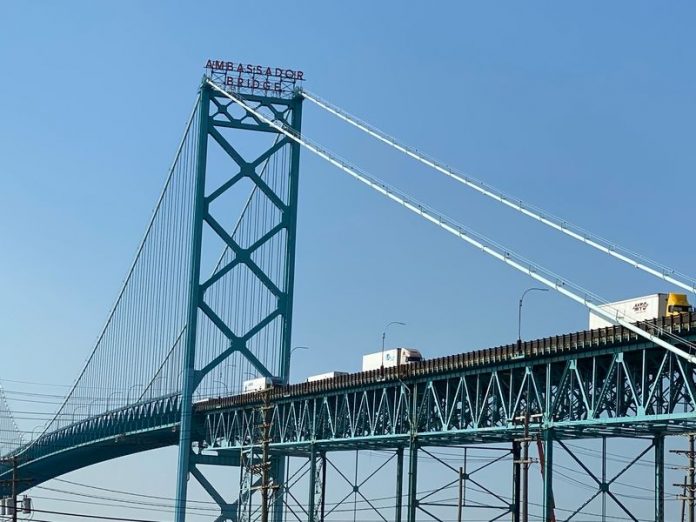 MDOT’s previous review of truck routes carrying hazardous materials resulting in the 2014 denial was the end of a process that took six years to play out. In 2008, the DIBC requested MDOT reconsider the long-standing hazmat ban, triggering a study that did not get completed until 2012.

The 2012 study concluded that “vehicular escorts provide an acceptable alternative to restricting certain hazardous materials” on the Ambassador.

MDOT’s engineers and scientists proposed allowing all but explosives and radioactive material to be transported over the Ambassador Bridge with escort vehicles that would be similar to those that accompany oversized loads across the span.

“The requirement for escorts — as an additional means to reduce risk — was recommended as a viable approach based on key variables, including the length of the route, speed of traffic and control of the traffic,” the report said.

The 2012 study came out during one of the most contentious periods between Moroun, MDOT and the administration of then-Gov. Rick Snyder.

In January of that year, a Wayne County judge jailed Moroun and Stamper for a night for contempt of court charges stemming from a yearslong legal fight with MDOT over construction of highway ramps connecting I-75 and I-96 to the Ambassador Bridge complex.

In June 2012, Snyder inked a deal with Canadian officials to build the new bridge without any financial assistance from Michigan taxpayers.

In the fall of that year, Moroun waged an unsuccessful campaign at the ballot box to block the construction of the new bridge — the end of a two-year TV advertising barrage by the DIBC to convince the public and lawmakers that a new government-owned bridge would be a boondoggle.

Moroun’s camp has long suspected the January 2014 decision by MDOT’s top brass to not lift the hazmat restrictions was a form of political retribution from the governor’s office.

“You had engineers who studied the problem, they did a risk analysis, the risk analysis came to a particular conclusion, the conclusion was that’s a net safety benefit to the community,” DIBC vice president Kevin Kalczynski told Crain’s. “Anything else seems like it’s either politics or its past history or it’s whatever.”

Community opposition to hazmat trucks in the Hubbard Richard neighborhood between the bridge complex and Corktown also was seen as a factor in MDOT’s last denial.

“The 2012 MDOT report entirely failed to explain how allowing hazardous materials across the bridge would enhance public safety,” said U.S. Rep. Rashida Tlaib, a Detroit Democrat who has long clashed with the Morouns.

Tlaib argues the truck ferry is “by far the safer crossing” for hazmat materials because it’s closed to passenger traffic and subject to inbound and outbound inspections by U.S. Customs and Border Protection.

The Detroit-Windsor Truck Ferry, which temporarily shut down in April and May due to low traffic during the coronavirus lockdown, carries 40 to 50 trucks per day carrying hazardous materials, truck ferry President Gregg Ward said.

Ward has long been aligned with Tlaib in opposition to the Morouns’ operation of the Ambassador and attempts to derail the Gordie Howe bridge project, which is being built a few hundred yards from Ward’s ferry boat dock in Delray.

“It’s all about getting his duty-free fuel across cheaper,” Ward said of Matty Moroun two days before his death.

Stamper said the fuel does not come across the bridge from Canada, rather it comes through a pipeline from a refinery in Toledo.

Buying wholesale fuel from Canada for the duty-free store is a potential option, Stamper acknowledged.

Osterhout to Hold Annual Gala, With a Twist

Thieves remove ATM with tow truck but fail to get the...