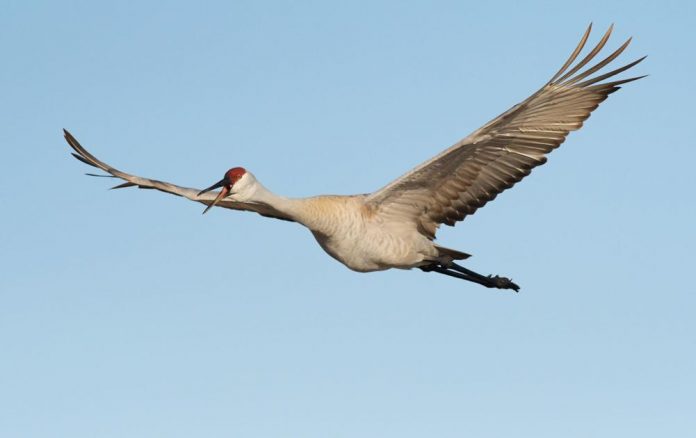 A couple weeks ago, I arose well before sunrise and loaded a kayak into the bed of truck. After securing the little boat, and stowing camera gear and water in the truck, I headed for vast Swan lake.

My plan was to creep the waterway in the silent craft and observe duck behavior, both to obtain photographs and get a handle on waterfowl numbers and patterns.

The sleek boat glided easily in the main channel with every paddle stroke but soon became an effort to move when I discovered the lower water in the back bays choked with magnum lily pads. Not a good surface to run a kayak, and certainly not a quiet way to approach ducks.

Determined to locate birds, I wrestled the kayak through cattail mazes, spooking and sending dozens of wood ducks and teal scattering from their hides.

The kayak sounded as if it were being dragged across a slick vinyl floor as it slid over the lilies. The results were not satisfying: no nice images, and zero information on duck patterns.

Admitting a partial defeat, I muscled the boat back to the main lake and ghosted along the bulrushes looking for bird sign. Unfortunately, my only feathered guests were marsh wrens, red-wing blackbirds and an occasional grebe.

The water in the main channel was too deep for puddle duck occupation, but the spot provided a clear view of other species as they winged over the lake’s huge, shallow expanses. While stopping to watch a darting wren, I looked skyward and was surprised to see 14 white egrets sailing overhead, their slow, powerful wing beats propelling them effortlessly across the blue sky.

At that instant, my duck foray morphed into a search for late summer migrating birds.

Most folks, waterfowl hunters not included, usually concentrate on spring migrations. The reasons are twofold: The birds are in their most brilliant colors, and because many of the birds are concentrating on breeding, they are far easier to approach than at other times of year.

However, late summer kicks off the fall migration, an event that can rival the spring affair when birds arrive in our area from far north summering grounds. As our traditional Minnesota summer closes, it’s not unusual to witness large groups of egrets or herons migrating or loafing together on their journey south.

Many of those birds travel 4,000 miles to reach northern marshes, which makes you wonder if the effort was worth less than 10 weeks respite from hard migrating flight.

I pushed the kayak back to shore, leaning on the paddle to expedite my relocation to a spot I was sure would hold early migrators. The area I chose featured a lonely, dirt road that bisects a shallow slough and a large grain field that frequently holds water after even moderate rains.

In spring, it always holds birds, from nesting teal on one side to myriad shorebirds on the other. It’s layout practically guarantees bird action both in spring and fall.

My timing was excellent. A half-dozen great blue herons hunted the slough, while dozens of shorebirds darted about the mud flats in the field plucking grubs and grain.

At the far end of the field, a brace of large, long-billed sand hill cranes lifted off and glided right over me, their huge wings and familiar squawks creating a din in the still air.

After photographing the cranes, I donned hip boots and joined the shorebirds on the mud flats. Unlike most birds, shore-dwelling birds are braver, allowing for close approaches, which is a boon because their tiny size requires closeness, even when toting long, 500mm telephoto lenses. Most of the birds were least sandpipers, fast-moving birds barely 6 inches in length whose loud, endearing feeding “peeps” never seem to stop.

Familiar to nearly everyone, a quartet of killdeer arrived to probe the mud for snacks, too. Killdeer are a little more standoffish then sandpipers, but if you remain motionless, the birds will cross into good camera range. Their brilliant eyes and white neck ring are set off nicely in good late and early light.

When the sun became too harsh, I returned to the truck to review the surplus of images. In haste, I kept my waders on, and chunks of water-laden mud slid off them, smacking on the floor mats with moist thuds. What could have been an annoyance, the mud that pooled on the trucks floor was now a welcome reminder of a great day observing late summer bird migration behavior.

Mark Morrison is an avid hunter and fisherman who has been a freelance outdoors writer and photographer for more than 20 years. The Mankato resident since 1979 may be contacted at mercuryphotog@aol.com.

How new ambulance and gear will help Eau Claire firefighters