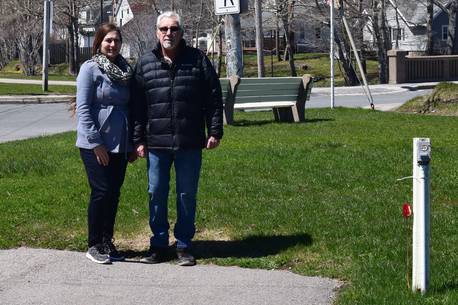 There are signs of spring the public is not seeing, including the usual crowd around the iconic Glace Bay Chip Wagon.

The chip wagon location, where it has been on Water Street for 73 years, remains bare.

“At this point, I’m not opening,” said Michael Yorke, who along with wife Marielle Yorke, have owned the truck for 33 years.

Although food trucks are classified as takeout and can open by adhering to restrictions in place due to the COVID-19 crisis, Michael Yorke said the social distancing requirements make things a little tricky.

“I’m hoping to open but I’m taking my time with it, being extra cautious,” he said. “I don’t want my employees or the public to get infected. Chip wagons can get pretty crowded at times. I’m just playing it by ear.”

The Yorkes are keeping customers updated on their Facebook site.

“We are hoping to do the right thing,” he said. “We will remain closed this month and we’ll revisit it in June and see where things are then.”

The iconic chip wagon first opened in 1946 when the original owners moved it from Montreal to Glace Bay after Montreal had passed a bylaw prohibiting vending.

This would be their third summer for the family business in Sydney that also includes husband Sheldon Boutilier and 17-year-old daughter Emma Harper.

“We honestly haven’t made a decision, as much as we are anxious to open our ice cream truck,” she said.

“How do you operate in a food truck environment with the restrictions? We’re kind of in a wait-and-see right now unfortunately.”

She is part of a Facebook site of vendors who collaborate on different things including the restrictions now in place because of COVID-19. The majority seem to be waiting it out right now, she said.

Boutilier said they don’t have any problem wearing facemasks and gloves but the social distancing in a food truck environment — where often the ordering window is also the serving window — is a concern.

“Most often there would be times where someone is making an order and a different customer is receiving an order,” she said. “You have to see where you can create that sort of environment that can adhere to the six-foot (distancing) rule.”

Last year the family purchased Mac’s Convenience Store in Sydney and live above the store, also allowing for a permanent location for Annie’s near Wentworth Park. Normally they’d open the truck the third week in May.

“It’s really a wait and see situation,” she added.

The Stand Up & Stuff Your Face food truck is not only open, they were never closed.

Owners Tim Lockhart and his wife Rhonda Lockhart operate year-round. They were always classified as takeout and slimply adjusted to COVID-19 protocols. Tim Lockhart said they are zero contact and don’t take cash, only debit or credit. One person handles the orders, one person cooks and one person bags.

“There‘s no contact with the food whatsoever,” he said. “We go through 1,000 pairs of gloves a week.”

Lockhart said they have always hired summer staff, but they’ve been so busy, for the first time ever they’ve hired two extra people this spring.

The food truck, which is based in South Haven, opened five years ago and travels to Port Hood, Cheticamp, Inverness, Ingonish, Whycocomagh, Baddeck and Mabou. The schedule is available at https://standandstuffyourface.ca/.

They have also adjusted their hours and are now open 12-5 p.m.

Lockhart believes they are so busy because people are tired of staying at home.

“To go out and get takeout food they are not breaking the law,” he said.

The menu is varied and includes everything from gourmet hamburgers to fish and chips, donairs and buffalo chicken burgers.

“We appreciate what they are doing out there and we’re trying to do what we can to help.”

Christina Lamey, a spokesperson for the Cape Breton Regional Municipality, said food truck vendors can operate, however, the province has mandated that they must follow the social distancing requirements. Otherwise, the rules as outlined in the vendors bylaw remain the same.

To date, the CBRM has only received and approved one application for a food vendor’s licence. Names of approved vendors are not released publicly.

In 2018, there were 27 mobile and stationary vendor licences issued and in 2019 a total of 27 vendors licences were issued as of August.

Coxheath-based Bungalow Beans Coffee isn’t on the road right now but they are travelling online.

Owner Steve Smith said they have not opened, he wants to protect himself, his family and the public.

“I would have to take so many precautions to protect the public … it’s not really conducive at this time,” he said.

Smith said to open his coffee camper, he’d have to wear a mask and there’d be constant sanitizing. When dealing with coffee there are many different moving parts as people want different ingredients.

“People could serve themselves but then I’d have to be sanitizing whatever they are touching,” he said. “That brings you into using single service products which is expensive. We just don’t feel like the coffee camper is a good idea at this time.”

Smith, who is the chair of the Cape Breton Farmers’ Market board of directors and a vendor, said the market teamed up with the Pan Cape Breton Food Hub Co-op and he’s one of many vendors selling products online at www.pancapebretonfoodhub.ca.

“I’m selling coffee beans and cold brew coffee by the jar,” he said. “They are working now (to get) crafts people and artisans online, so everyone has their fair share.”

Last year was Smith’s first as a mobile food vendor and he got a late start, opening in June. This year he was ready to go.

Also, with the tourism season up in the air, Smith doesn’t know yet if it is conducive to pay the more than $400 fee for the permit for essentially two or three months.

“Maybe the CBRM would waive the fee this year just to get the economy open,” he said. “It would cost them nothing to give a half price or even free permit this year just to let people get their doors open and make some money.”

COVID-19 spreads, deaths rise in US following return to work