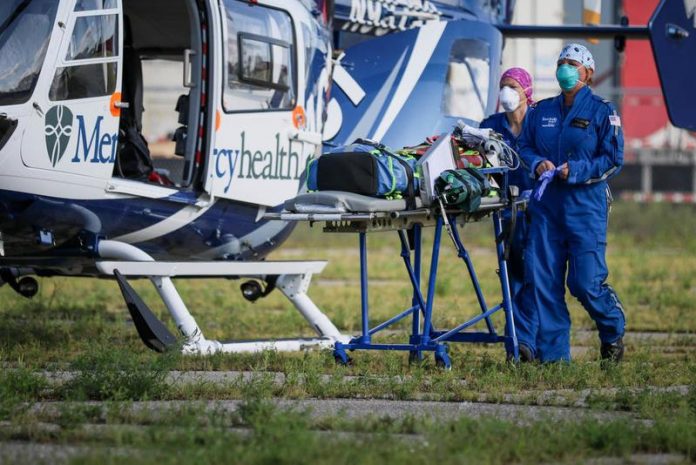 A motorcycle collided with a pickup truck at the intersection of Brink Street and Marengo Road in Harvard on Sunday evening leaving the motorcycle’s driver in critical condition.

The Harvard Fire Protection District arrived on scene about 4:40 p.m. and requested the assistance of a Mercyhealth REACT helicopter to fly the driver of the motorcycle, an adult male, to Javon Bea Hospital-Rockton in Rockford, Battalion Chief Bryan Pierce said.

Pierce’s team also requested the assistance of Mercyhealth’s MD-1 to treat the driver’s injuries before he could be taken. MD-1 is a fleet of emergency vehicles designed to bring physicians on scene when first responders require additional support in stabilizing a patient, according to an article on Mercyhealth’s website.

The motorcycle’s passenger, an adult female, also was injured in the crash.

The motorcycle sustained significant damage in the crash, but the truck was only slightly damaged, Pierce said. The driver of the pickup truck was not injured in the incident.

Portions of Brink Street and Marengo Road were closed for about 40 minutes as first responders worked to clear the scene, Pierce said. Both roads now are open.

Harvard Police and Marengo Rescue Squad also were on scene.

Traffic is back, but still nowhere near ‘normal’ – News –...