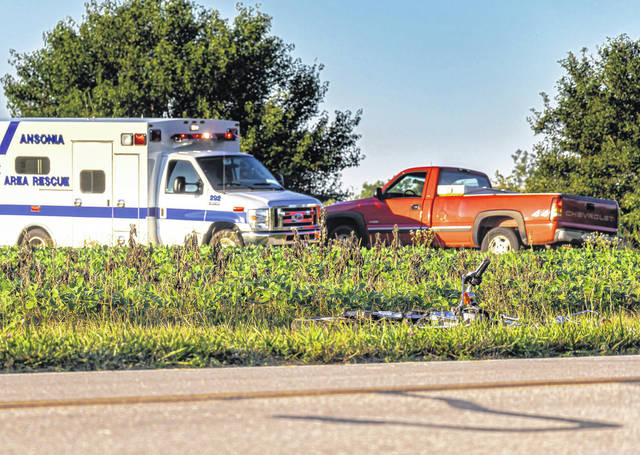 A man was transported to Miami Valley Hospital following a collision between a pickup truck and motorcycle Friday evening. The pickup truck drive was cited with OVI.

VERSAILLES — A motorcyclist was airlifted Friday evening as a result of a serious injury crash in which a driver of a pickup truck was cited for OVI.

At approximately 7:35 p.m., emergency personnel from Ansonia Rescue, Versailles Fire and Rescue, CareFlight and deputies from the Darke County Sheriff’s Office responded to the intersection of State Route 242 and Younker Road in reference to a two-vehicle accident with injuries involving a motorcycle.

According to deputies, a preliminary investigation into the incident revealed a red 2000 Chevy truck driven by Kevin Dickey, 65, of Ansonia, was traveling eastbound on State Route 242 when Dickey attempted a left turn north onto Younker Road. Dickey failed to yield the right of way when making a left turn and traveled into the path of a westbound 1979 Harley Davidson motorcycle driven by Joshua Barga, 42, of Ansonia. Barga traveled off the right side of the roadway and, as a result of the impact, was ejected from the motorcycle coming to rest at the edge of a field.

Barga, who was not wearing a helmet at the time of the accident, was treated on the scene by Ansonia and Versailles Rescue for what were described as serious injuries. Barga was then transported to the Darke County Airport to an awaiting CareFlight crew where he was airlifted to Miami Valley Hospital.

Dickey was examined by EMS and found to be uninjured in the crash, later refusing further treatment and transport to a medical facility. Dickey was charged with OVI and right of way when turning left.

The incident remains under investigation by the Darke County Sheriff’s Office. A man was transported to Miami Valley Hospital following a collision between a pickup truck and motorcycle Friday evening. The pickup truck drive was cited with OVI.

Truck Soundproofing Material Market Reviewed in a New Study – The...