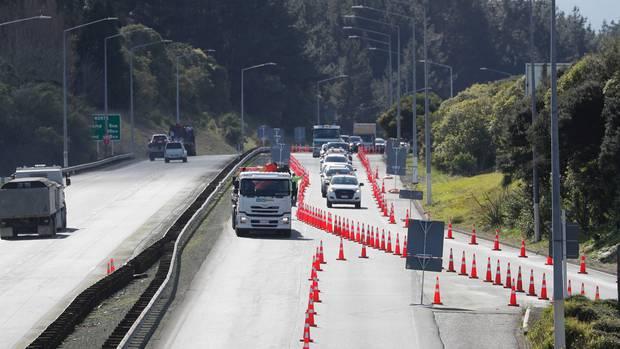 A motorist who fled from a police Covid checkpoint by driving down a truck bypass lane is now facing charges.

The dangerous driving sparked a police pursuit that had to be abandoned due to the erratic driving, police have revealed.

The incident took place on State Highway 1 at Bombay yesterday – the scene of extensive traffic delays due to Covid checkpoints.

A man was arrested after the police Eagle helicopter followed a vehicle.

“We had one incident yesterday where a 58-year-old man travelling on State Highway 1, northbound at Bombay, has attempted to evade Police by driving down the truck bypass lane,” he said.

“A short pursuit was initiated but abandoned due to the dangerous manner of driving.

“Eagle located the vehicle at an address in Drury and the man was taken into custody without incident. He now faces a number of charges and will appear at Manukau District Court on August 31.”

Police checkpoints have stopped 2205 vehicles entering or leaving Auckland in the past 24 hours out of the 69,486 cars which have been through them.

Police have increased the number of checkpoints and there are now 13 in North and South Auckland under Alert Level 3 restrictions.

Chambers said police had noticed an increased effort from members of the public having documentation ready to show Police at the checkpoints and this had helped reduce the wait times this morning.

However motorists should still expect delays at peak hours as police worked as quickly as possible to get vehicles through checkpoints.

Since Auckland went moved to level 3 last Wednesday, police have been patrolling essential facilities such as supermarkets, pharmacies and Covid-19 testing sites.

So far four people have been warned for breaching the restrictions with police preferring to take an educational approach.

Police attended a report of a number of people not social distancing at St Heliers beach shortly before 1pm on Sunday and spoke to the people who were all in their various bubbles and mainly exercising, about keeping a distance from each other.

Man knocked down trying to arrest truck driver for scratching his...