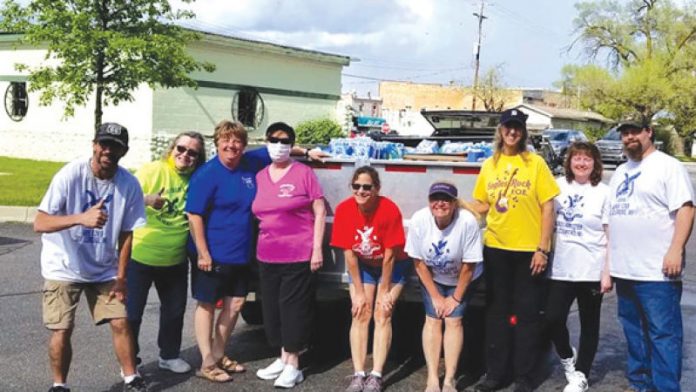 MOUNT CLEMENS — The first half of 2020 has proven to be one of heartache and hardship.

First came the ongoing COVID-19 pandemic. Then, for the folks of mid-Michigan, came devastating flooding, caused in large part to Edenville and Sanford dams breaching May 19 in Midland County.

In Macomb County, roughly two hours southeast of Midland County, the Mount Clemens Fraternal Order of Eagles #1269 knew it had to help, regardless of where in Michigan assistance is needed.

The last couple weeks, enough items, like cleaning products and water, have been collected for a caravan of vehicles to distribute materials to Eagles clubs of Sanford and Albright Shores.

Adrienne Quenneville, a Mount Clemens Fraternal Order of Eagles member who is an organizer for the operation, said when the dams burst, she was talking with fellow organizer Tommie Sepesi, both agreeing that something needed to be done to help.

Quenneville and Sepesi, along with Pam Peacock, have spearheaded the efforts of collection and delivery.

With the help of Dave Gaber, a franchise owner from Two Men and a Truck, the Eagles delivered a truck full of items to the area the weeks of May 25 and June 1. Gaber offered a 30-foot truck, a driver and his services to get supplies to those in need.

“With people who have nothing, certainly the list of things you can get for them is long,” Quenneville said.

After getting in touch with other clubs in the area, Quenneville connected with the  Sanford Fraternal Order of Eagles.

In Sanford, a village with a population of about 850, heavy rains led to dams breaching, which caused massive flooding throughout Midland County.

“We found out that 100 members of the Sanford club lost their homes,” Quenneville said.

“The first week was awesome with all the support we received,” Daniels said. “People wanted to come to work for us and help us out.”

The Sanford Eagles have over 500 members. Its building is located just across the Tittabawassee River from the Sanford Dam.

Daniels said the club has received assistance by way of folks helping with gutting buildings and homes, providing food and water, and more.

On June 1, Daniels said the amount of helpers has greatly decreased since the dams burst.

“There’s no more flooding in the streets, the water levels are down,” she said. “The rivers are back to level.”

Daniels said the club’s kitchen was destroyed, and everything has been ripped out.

“We’ve lost everything,” she said. “We’ve lost our office paperwork, bingo and bar. Everything is down to the bare walls. There was hardly anything to salvage.”

Although the Sanford Eagles building was not deemed condemned by a building inspector, a part of the building will have to be rebuilt.

Daniels wanted to thank everyone who has taken the time to help and donate.

“Mount Clemens got in touch with us right away, and we’ve been in contact a couple times a week with them,” she said. “Our hearts are overwhelmed with gratitude.”

Holding back tears, Quenneville said that after seeing the flooding, “you just want to help. It’s just what we do. We’ve done so much help for area organizations that it seemed kind of silly to not help people in our own state.”

A couple days after the dams burst, collection sites were set up around Michigan, including at the Mount Clemens Eagles building on South River Road in Harrison Township, Full Throttle Speed & Style on Klein Road in Fraser, and the Devoted Barn, an animal rescue service, in Holly.

Folks could either drop off items or contribute financially.

“The devastation is beyond anything you can imagine,” Quenneville said. “The photos being shared don’t do justice to what it actually looks like. They were pretty shell-shocked by what they saw.”

Due to the overwhelming response, another collection occurred the week of June 8.

“Just because we take a truck up there, the situation isn’t over. It’s something these people will struggle with through the summer and as long as it takes to rebuild.”

“People really don’t have a lot of room store things, because a lot of them don’t have homes,” Quenneville said. “They asked for gift cards to continue buying food until they can get back on their feet and find a home.”

She added that what she wants people in Macomb County to realize is how fast the devastation happened with people losing everything.

“Nothing is promised and you should appreciate what you have,” Quenneville said. “I thank God there’s people who step up and help, not even thinking twice about it to help.”

Quenneville described the Eagles as an international organization whose motto is “People helping people.”

The Mount Clemens group consists of over 2,000 members.