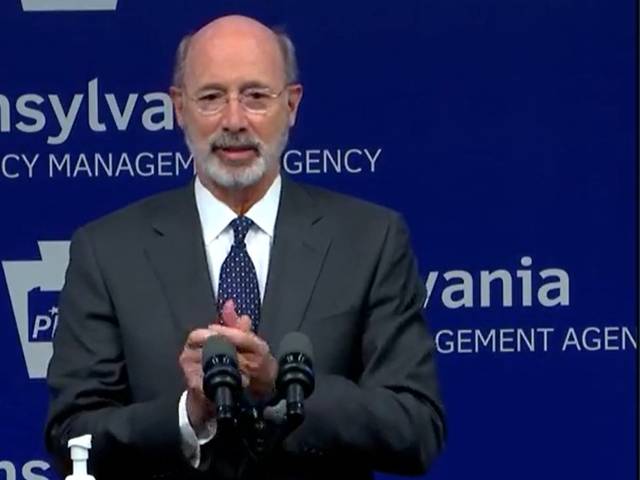 For many, particularly business owners, that decision didn’t come a moment too soon.

In fact, the move should have been made earlier, said Wilkes-Barre restaurant owner Dave Magda.

“We’re not kids. We’re aware of what’s going on,” Magda said of small business owners like himself.

For all intents and purposes, he’s been working in the yellow phase since the governor shut down or restricted business operations in late March. He’s been allowed to sell only takeouts and deliveries from Magda’s Pizza and Deli on Gardner Avenue in the city’s Parsons neighborhood. He’s also taken out one of the emergency relief loans from Wilkes-Barre.

“If (the governor is) going to give us a week to go to yellow, by next Friday he should tell us we’re going green,” Magda said.

People don’t want to miss another holiday and he said he’s been able to salvage some of his catering business for a couple graduation parties.

“I’m going to lose all of my catering for June and most of July,” Magda said. The pavilions where they were to be held have liquor licenses and it’s uncertain when they’ll be given the green light, he said.

The other counties moving to yellow on Friday will be Dauphin, Franklin, Huntington, Lebanon, Monroe, Pike and Schuylkill.

The remainder, including Lackawanna, should be moved into the yellow phase by June 5, the governor added.

“Our new case rate has been shrinking,” Wolf said, even as the state began to open businesses and activities in some counties.

“My stay-at-home order did exactly what it was intended to do,” Wolf said. “It saved lives.”

Wolf cited a study from Drexel University, which suggests that, in Philadelphia alone, more than 7,000 lives were saved by the stay at home order and an additional 68,000 hospitalizations were prevented in the city.

The state also is preparing a “road map” to deal with the virus if there is a second outbreak.

What does yellow mean?

While the yellow phase does allow for an increased number of businesses to be open, there are still strict guidelines that must be followed, according to the phased reopening plan from the governor’s office.

According to the governor’s website, those who are able to work from home must continue to do so. While the stay-at-home order will be lifted, gatherings of groups larger than 25 are still prohibited, and any indoor recreational or health facility, such as gyms, spas and nail salons, must remain closed. Entertainment facilities like theaters and casinos must also remain closed.

Child care facilities can reopen, as long as the follow guidance from the state, while schools must remain closed for in-person instructions.

Restaurants and bars will continue to be limited to operating exclusively in a carry-out and delivery capacity.

An increased amount of in-person retail will be allowable, but businesses are still encouraged to use curbside means of giving goods to customers.

“It’s a step in the right direction for us. I would like to see us go to green as soon as possible. We still have a lot of businesses that are hurting because they still can’t open,” Brown said.

Barber shops and hair salons still can’t open up and restaurants are limited to serving take outs. The mom-and -pop shops won’t benefit from the governor’s order. “It’s not going to help them,” Brown said.

His administration set up an emergency relief loan program to keep locally owned and non-franchised restaurants and small businesses afloat during the pandemic. With approval by the state Wilkes-Barre tapped into an underused economic development program that was sitting on more than $300,000 in funds.

Brown credited the city residents with following the social distancing and stay-at-home directives imposed by the state under the most restrictive red phase. Their efforts have paid off. “Our people are listening to what we’re asking them to do,” Brown said.

In a statement issued Friday afternoon, state Sen. John Yudichak, I-Swoyersville, said now is a time to reflect on the sacrifices Luzerne County residents have made.

“Although the yellow phase of the Governor’s reopening plan still places many businesses — like salons, barbers, restaurants, and gyms, at great economic risk — it is a moment to reflect on the tremendous sacrifice the citizens of Luzerne County have made to practice social distancing and mitigate the spread of the coronavirus,” Yudichak wrote.

“As scientists work toward a vaccine, leaders in Washington and Harrisburg need to work together to protect both public health and the livelihoods of families who are doing everything their government asks of them during the COVID-19 pandemic despite the personal economic hardship they are enduring,” Yudichak’s comments went on.

Wolf: ‘I’m not going to the beach’

During the press conference, Wolf was asked about comments from President Donald Trump on Friday, who said he would override any governors who had ordered the closure of religious institutions during lock-downs, calling the religious facilities “essential.”

Wolf said his administration had never ordered the closure of any religious facilities, but hopes religious leaders would take the safety of the faithful into account when deciding whether or not to hold services.

Wolf was also asked about New Jersey’s decision to reopen beaches on Memorial Day Weekend, and the governor suggested that Pennsylvanians should not go to the beaches this weekend.

“Personally, I’m not going to the beach,” he said. “I’m staying home in York County.”

Additionally, the first round of counties to move into the green phase will also begin on May 29, including Bradford, Cameron, Clarion, Clearfield, Crawford, Elk, Forest, Jefferson, Lawrence, McKean, Montour, Potter, Snyder, Tioga, Venango and Warren.

Dr. Rachel Levine, secretary of the Department of Health, said that she was confident that the contract tracing efforts in these 17 counties are sufficient to spot any resurgence of COVID-19, and that these counties are helping to inform how the phases are implemented around the rest of the commonwealth.