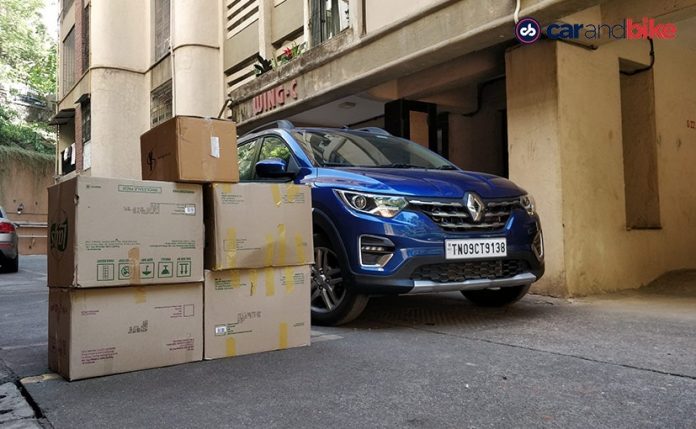 The Renault Triber is a people mover, we know that, but can it move houses? Well, we put the Triber to the test to really understand how flexible this sub-4 metre MPV really is.

The last few weeks have been hectic. Not because of a global pandemic, but since this writer has been in the middle of moving to a new house. It’s a process that’s fatigue-inducing right from searching for the right property to arranging finances. While it has given me a new haven to call home, there’s also a debt I’d rather not have. So, when the movers and packers sent a quote of nearly ₹ 40,000 (including taxes) to move our stuff from the old house to the new one just four kilometres apart, my salary was having none of it. It made more sense to do it myself and that too with a vehicle big yet frugal enough to carry the load. Now doing this with a truck or a full-size SUV wouldn’t be fun or efficient, so to make things more challenging, we decided to call for the most affordable MPV on sale. The new Renault Triber has been quite the revelation with its space. But is it versatile enough to save me some precious bucks? 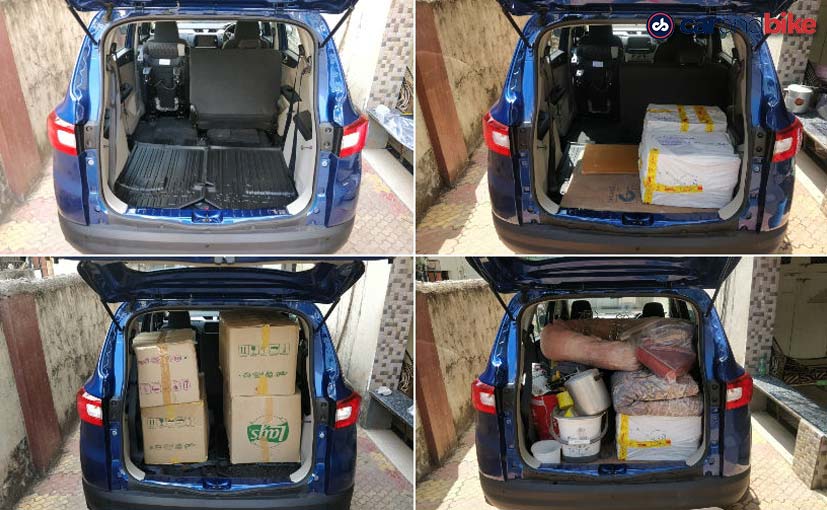 Tall stance, removable third row, and foldable seats, the Triber’s cabin can be configurated to carry the load in any way you like

The Renault Triber is a sub-4 metre car, so yes, space is restricted. And to move houses you need those big cardboard boxes to fit in. The flexible seats allow access to 625 litres of cargo space with the second row up. That’s larger than the average hatchback and can accommodate up to four big boxes with ease. The first trip then comprised just that, ferrying four large boxes and the parents.

In the subsequent rounds, there were no passengers on board and that further allowed me to fold the second row and utilise the space more wisely. Renault calls it the Camp Mode and you can further dump at least two more large boxes and smaller bags with the second row folded. We even managed to use the front seats to dump more bags and luggage. In practical terms then, that’s probably another 200 litres of space utilised. If anything, it did confirm that my folks are hoarders. 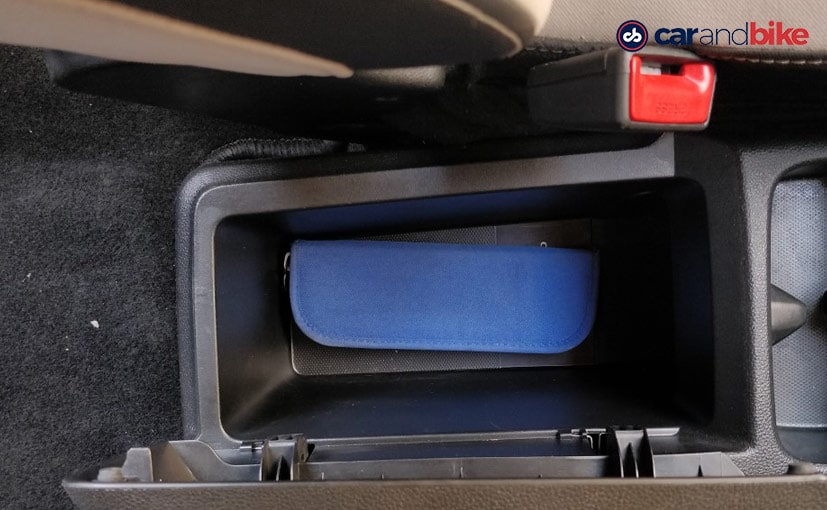 The cooling box between the front seats is a smart addition and gets its own blower controls, convenient to carry medicines or cold cuts

It’s not just the hollow space inside that’s impressive. There are plenty of stowage options too. The third row can be completely removed and that offers access to a flat floor, and is easy to detach and attach as well. It also helps that the spare tyre is mounted under the body, further liberating room at the rear. There are cubby holes across the cabin including two gloveboxes and a cooler between the front seats. The cooler helped ferry medicines and is effective with its own blower settings. In case you were wondering, the AC works well and there are vents for the second row that further helps keep the cabin cool. 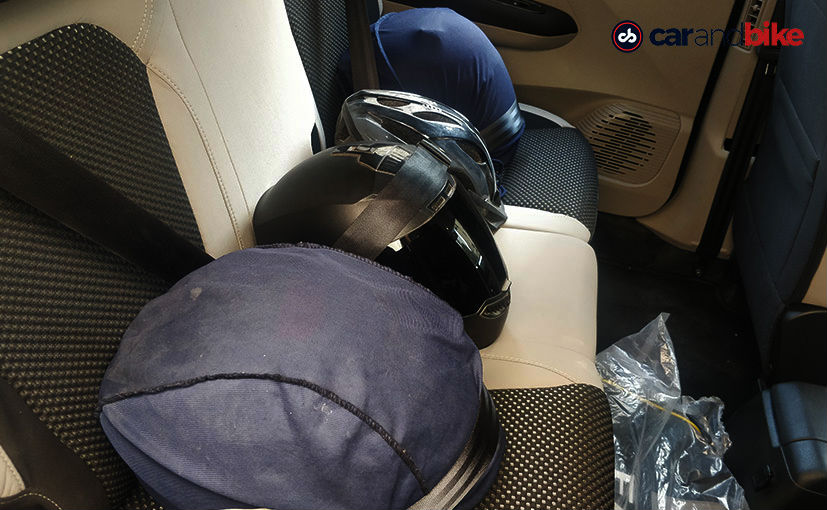 Four helmets, No Problem! All three rows get seatbelts including the middle-seats on the Triber

The low lip for the cargo bay on the Renault Triber made loading the boxes a convenient affair. You bend less to load or unload the cargo, forgiving the stress on the spine, and reduce the amount of exertion we had to endure on every trip. The tall stance also makes for ample headroom, so we could stack up more boxes on top of another. With seatbelts for all three rows, it helped secure the cargo in place whenever required. 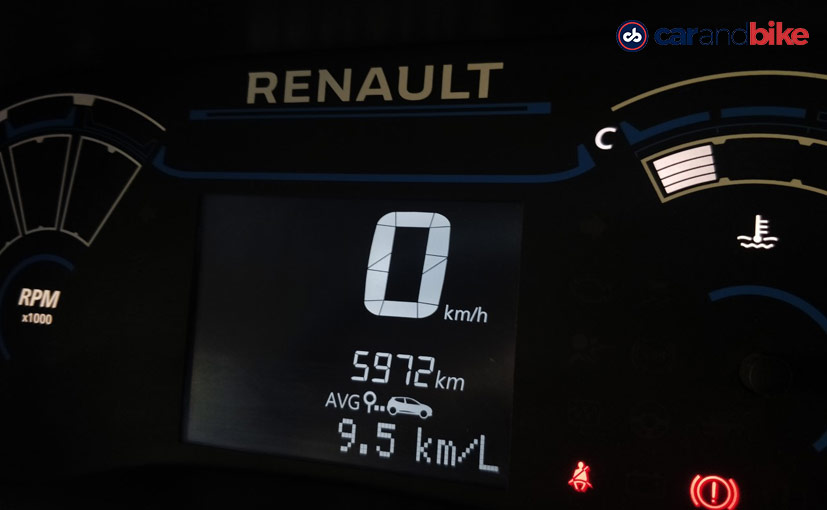 The luggage did take a toll on the Triber’s performance even if intra-city commutes aren’t the best judge of the same. The 1.0-litre engine packs in 71 bhp and 96 Nm and those figures do look puny in a fully-loaded car. While the struggle isn’t much on flat roads, climbing uphill becomes a task. The manual gearbox feels notchy in the initial gears irrespective of the load and tends to jerk without stalling the MPV. This did become a problem when ferrying glassware and I had to be gentler with the gear shifts to not break anything and invite the wrath of my mother. The Triber though eases on the open road in higher gears and despite some effort with a loaded cabin, it is a likeable package to drive. The compact proportions make it a breeze in the city and the light steering wheel is just right when manoeuvring inside the tight apartment premises.

The addition of Apple CarPlay and Android Auto is a big welcome, and the overall quality in the cabin feels robust if not fancy. We do think Renault could’ve added steering mounted controls for music and call functions, which is a big miss. 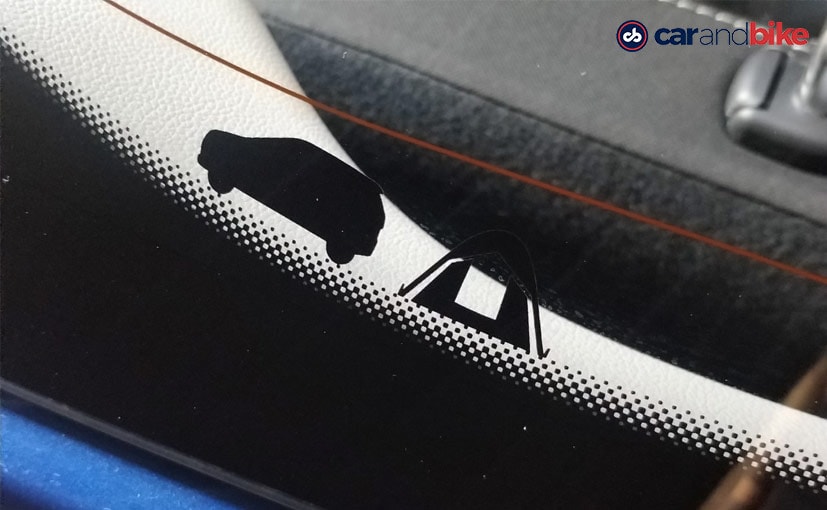 The Renault Triber did well given the task at hand. We had one weekend to move things and managed to do so in six trips. That’s 30 years of life for my parents stored in countless boxes (24 boxes, 8 bags and 5 suitcases to be precise) all of which made it safely to the new home. The final cost including a larger truck for the big furniture and appliances, hired help, fuel and even miscellaneous expenses, came down to ₹ 9000. The fuel cost was the lowest with about 40 km driven to and fro, and equates to about ₹ 400 worth of petrol with an average of about 8 kmpl. That’s about ₹ 21,000 saved, and iterates that less doesn’t mean a compromise but is about being efficient instead.

Platooning on Highways Market Set for Rapid Growth and Trend by...