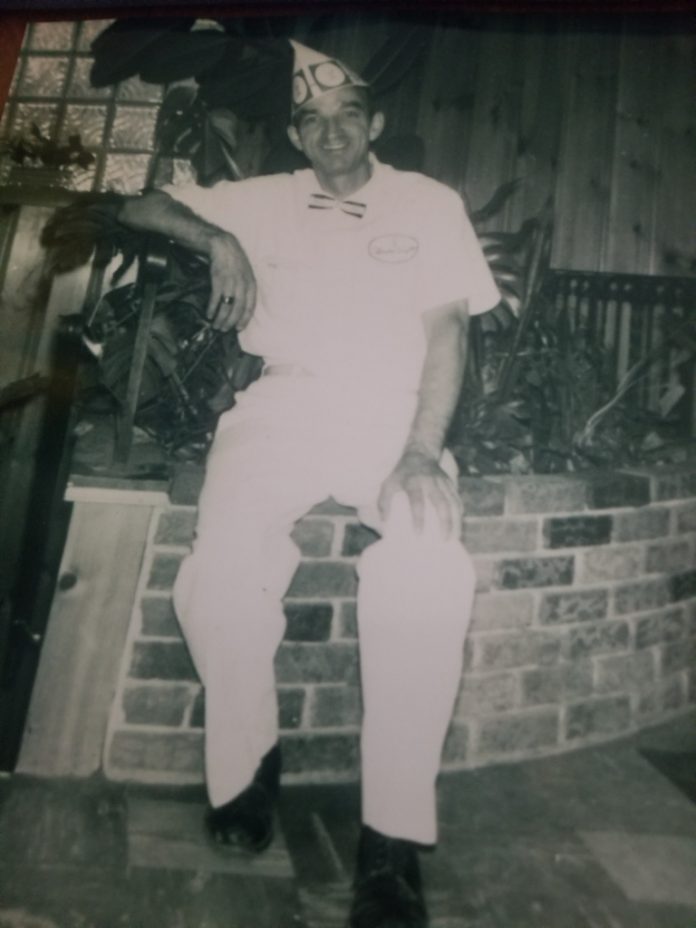 LOWELL – For 25 years, Vincent Comtois was known as Mr. Softee to kids growing up in Centralville and Pawtucketville. His ice cream truck criss-crossed the streets of the two neighborhoods, from 1961 to 1986, as amplified music box sounds announced his arrival.

Comtois was born in Centralville in 1924 in a home his father built and died last month in a home that he built just a few streets away. “The circle of life,” his oldest son Pierre Comtois observed.

In between, he joined a monastic order in Quebec, worked on a chicken farm in Saskatchewan,  worked as milkman in Lowell, quarried rocks in Westford, owned a variety store in Lowell and met Cecile Demeule whom he married and with whom he raised six children.

Tributes to Vincent Comtois poured in when his son, Pierre Comtois, posted news of his death on Facebook. He estimates 1,000 likes and comments were posted.

Testimonials on Facebook and on the funeral director’s website describe him as a “lovely man with a big smile and such a good soul” and “a wonderful loving man, father and person. I will always remember him greeting me with a smile when I was a boy.”

Others remember a man who made sure no child walked away from his truck without something. “One lady said (on Facebook) she remembers him giving free bazooka bubble gum to the children who didn’t have money for ice cream,” his daughter Therese Lane said.

“He became a Lowell icon and a part of Lowell history,” Lane added.

At home, his children saw little of him between Easter and Halloween, the usual opening and closing of his season. And even in the winter months, he always had another job, according to Pierre Comtois, until he reached a point where he could afford to take time off during the cold weather.

His children remember him as a man of deep faith and remarkable discipline. His son Louis Comtois, who now lives in Florida, believes the discipline came from his experience at the monastery in Quebec.

When he left the monastic order (Les Freres St. Viateur) he promised God he would return on a  pilgrimage every year. The monastery is located in Rigaud, Quebec which also boasts a shrine, the Our Lady of Lourdes Sanctuary.

“He kept his promise,” Lane said. “Each year that became our family’s vacation.”  They would camp along the Ottawa River over Labor Day weekend.

The discipline of monastic life carried over into his home life. He was a loving but firm disciplinarian.

“There was no walking around in your pajamas in the morning,” Lane said. “In the morning you had to dress up right away when you got up. As for weeknights, you knew the rules — ’read, homework or bed.’ “

He bought his Mr. Softee Truck after an accident at the quarry in Westford left him blind in one eye and after selling Vincent’s Variety Store (which then operated for decades as Marie’s Variety Store).

West Lynn Creamery would then arrive with all the supplies he needed to make soft cream, pop corn, snow cones and “all the stuff.”  All of this was done at the garage next to the house.

It was a noisy operation, according to the Comtois children. “All the stuff would wake us up,” Pierre Comtois said. “Giant cubes of ice went into a giant machine that would grind them up. By 6 a.m. we were up or he’d wake us up.”  The children then went out to help. Pierre Comtois  remembers being paid $1 to wash the outside of the truck. It always needed that attention.

True to his disciplined character, his morning route took him through Pawtucketville. Then, he would return home for lunch. He’d sit in a little area between the house and the garage for his meal, always accompanied by lemonade, or perhaps, once in a great while, he might have a beer.

Sitting in the family home, Pierre and Joseph Comtois could not quite agree on the beverage. Joseph Comtois said he never had beer at lunch. Youngest brother Louis settled the argument from his home in Orlando. “If they (his parents) had company, then he might have beer. But I can really only recall maybe 12 times that happened.”

In the late afternoon and evenings, Mr. Softee was in Centralville.  His children all remember, “He went to the exact same spot at the exact same time everyday.” If something went wrong with the truck, he would worry because people knew his routine.

“When he got home at night, he would bring money in and we’d start counting. Then he’d give us ice cream, mostly to empty his machines,” Pierre Comtois explained. “Then at 11 he’d watch the news, but he’d be in bed by 11:15.

All his life, he went to Mass everyday, even in his later years at Bruyere Gardens, an independent living complex at D’Youville on Varnum Avenue.

“One day he fell and they only gave him a couple of days to live,” Pierre Comtois said. “The whole family came home and lived here to take care of him. He died a month later, literally within a few feet from where he was born.”

It was a fitting end to his life, according to Louis Comtois. “His faith in God, his love for his family and his community were what mattered.”