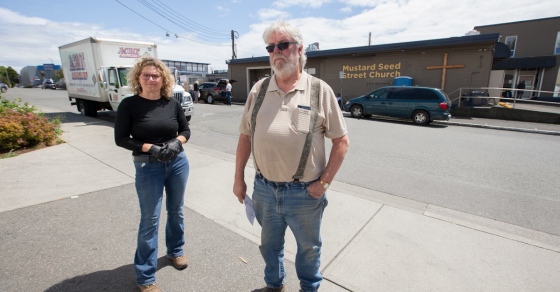 Harry Morros, who has operated a mechanics shop on Queens Street for 38 years, says he’s losing business — and patience — over the increasing numbers of people hanging around the Mustard Seed Street Church.

He said drug use is open and rampant, bicycles are being chopped for parts and people are leaving feces, needles and condoms, and urinating on his property and neighbouring properties. Attempts at communication are often met with threats, said Morros.

“I’ve lost a lot of business because of it. I don’t have a single car in the shop right now,” Morros said.

“People don’t want to drop their cars off any more. They don’t think it’s safe.

“It’s insanity. Some mornings, it looks like a dump truck unloaded a bunch of trash on our street. There’s a [portable toilet] right in front of [the Mustard Seed], but they don’t use it.”

Laura Alberti, who helps her husband run the automotive business, said Victoria police and bylaw officials are aware of the situation. Alberti said the city is trying to bring businesses and the Mustard Seed together for discussions on how to alleviate the problems.

Mustard Seed officials did not return calls for comment.

The Mustard Seed began as a small street church and outreach ministry downtown in 1975. It moved to 625 Queens Ave. in 1995 and is the city’s largest food bank.

The Mustard Seed has been a focal point during the pandemic, as a swath of the city’s population gathered there for meals and food pickups.

Some tents were set up, but most have since been cleared, as the city and province moved to find housing for the campers in newly acquired hotels.

Rob Sharpe, warehouse manager for Acme Supplies at Government and Queens streets, said daily cleanups are necessary. He puts in calls to the city almost every day to haul away “almost everything you can imagine” and has to wait for campers to clear a path into the parking lot before he can open for business.

“On Saturday, a buddy called me and said: ‘What’s going on over there? It looks like Beirut,’ ” Sharp said. “We call the police on a regular basis.”

Sharp said he feels empathy for people living on the street, many of whom have addictions and mental-health issues, but admits he’s feeling “less and less.”

“I wouldn’t want to live on the street,” he said. “Mentally, a lot are not OK, they have drug addictions and some don’t want help. I don’t know what the answer is.”

Alberti said she recently had to perform CPR on an overdose victim on the couple’s property. The woman was revived through a Narcan treatment and Alberti waited several tense weeks for the results of a blood test because she was worried about her own health. “It’s disheartening,” she said. “It just keeps happening over and over.”

Victoria police said it supports any dialogue between the business and the Mustard Seed.

“We support community members getting together to discuss issues in their neighbourhood,” VicPD spokesman Cam McIntyre said in an emailed statement.

McIntyre said the VicPD’s community resource officer designated to the area will be in attendance to listen and contribute strategies for crime reduction and community safety. “In addition, we will continue to conduct proactive patrols in the area and maintain a high-visibility presence when resources are available.”

The city’s bylaw and licensing services manager has been organizing much of the communications between the businesses and the area’s community police constable and is helping to set up a meeting with the Mustard Seed. She referred questions to city hall’s communications department, which did not respond to a request for comment.

In a commentary this month in the Times Colonist, Eric Findlay, president of Splashes Kitchen and Bath on Hillside Avenue, described how a person recently entered his store and, despite the efforts of staff to restrain him, defecated in a display toilet. There had been other issues on the property as well, he said.

Findlay called for strong leadership to find ways to alleviate homelessness, addiction and mental-health issues, and said businesses and property owners in Victoria should be allowed to vote even if they don’t live in the city.

“We will do what is necessary to ensure the safety and protection of our staff, customers and property,” said Findlay.

“Once again, the cost to do so will be borne by private business, the same group being the largest contributor to the municipal tax base, often without a vote toward determining real leadership.

“I think the business community and commercial property owners would agree it is time we had the ability to vote.”