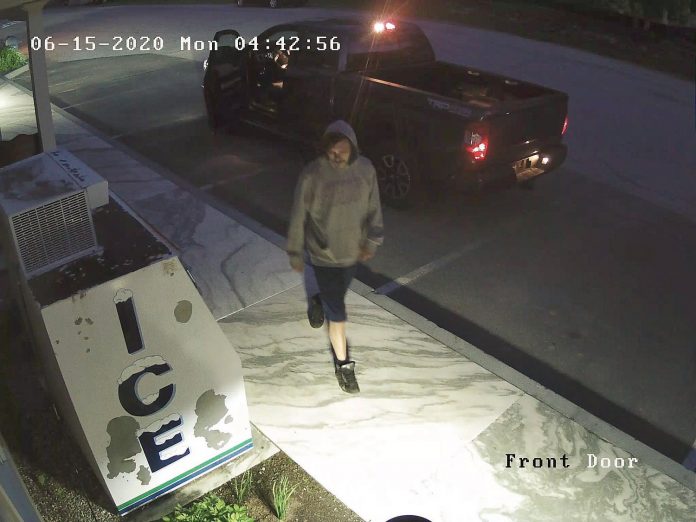 PERU — A New Hampshire man has been arrested in what police said was a burglary at a Peru store on Monday after driving to town with a stolen vehicle.

Matthew Tyler, 21, of Claremont, N.H. was arrested on charges of burglary, operating without owners’ consent and unlawful mischief, according to Vermont State Police.

Shortly before 5 a.m. Monday, troopers responded to a reported burglary at the J.J. Hapgood General Store at 305 Main Street. They found signs of forced entry, and an investigation that included the police departments of Springfield and Claremont led to Tyler’s arrest, according to a VSP release.

Investigators found that Tyler stole a 2020 Toyota Tundra from a dealership in Claremont and drove the truck to Peru, the release states. He broke into J.J. Hapgood and “attempted to steal the cash register.”

On Monday, state police circulated photos that they say came from a surveillance camera outside the store, showing the burglary suspect and the truck he was driving. They asked for public assistance in identifying the man.

Tyler is being held at Southern State Correctional Facility in Springfield in lieu of $2,500 bail. He was scheduled to appear in Bennington Superior criminal court early Wednesday afternoon to enter a plea.

If you’d like to leave a comment (or a tip or a question) about this story with the editors, please
email us. We also welcome letters to the editor for publication; you can do that by
filling out our letters form and submitting it to the newsroom.