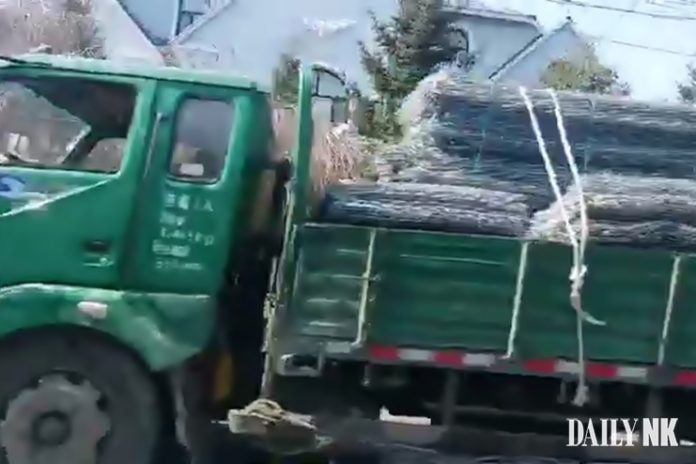 Shipments of metal were recently spotted being transported by truck into North Korea, despite the ban on such shipments by the UN Security Council, Daily NK has learned.

“Late last month, trucks with capacity of over five tons were seen parked in front of the customs office in Kaishantun in the Yanbian Korean Autonomous Prefecture of China,” a China-based source told Daily NK on Wednesday. “These trucks were awaiting inspection before entry into North Korea via the Sambong customs office.”

The Kaishantun customs office in China is located across from Sambong Workers District, an area in Onsong County, North Hamgyong Province. Goods that pass through this customs office enter North Korea via the Sambong customs office.

Although the customs office in Kaishantun was closed following the shutdown of the Sino-North Korean border in late January, it was temporarily reopened for the inspection of trucks heading into North Korea loaded with metal, including steel and iron, the source explained.

UN Security Council Resolution 2397 bans the export of steel and iron into North Korea. The fact that the customs office was temporarily reopened to allow the metal into North Korea, however, suggests that there may have been similar transactions between the two countries in the past.

“Other items, similar to the metal imported on this trip, were probably also transported to North Korea via other customs offices, not just the one in Kaishuntan,” the source said. “It’s likely that most of these materials will be sent to the Pyongyang General Hospital construction project, which is set to be completed by Oct. 10 and is a priority over all other construction projects.”

ALL EYES ON THE HOSPITAL

North Korea’s trade has suffered as a consequence of the coronavirus pandemic, and the country has struggled to acquire the construction materials necessary for key state construction projects. In response, North Korea even decreased the number of large-scale projects originally scheduled for completion this year from 15 to five.

North Korea’s leadership, however, views acquiring supplies for the Pyongyang General Hospital as the top priority. The authorities have even mobilized trading companies affiliated with the military to obtain necessary construction materials for the hospital project.

“The Pyongyang General Hospital is the most urgent concern right now, and even the traders have made it their priority to obtain materials for its construction,” the source said. “There are materials being shipped over to the hospital construction site from Dandong in Liaoning Province, too.”

The source cautioned, however, that trade between North Korea and China will continue to be restricted to goods that are immediately required for major state projects such as the Pyongyang General Hospital. This is because last month North Korean authorities announced a ban on the import of nonessential items until the end of the year.

“None of the customs offices [on the Chinese side] ever fully opened. There are only a few cargo trucks that enter North Korea occasionally,” another source in China told Daily NK.

“In the past you could see trucks lined up in front of the Dandong customs office or the Quanhe customs office in Hunchun waiting their turn to enter North Korea. These days, however, there’s none of that,” he added.

Please direct any comments or questions about this article to dailynkenglish@uni-media.net.