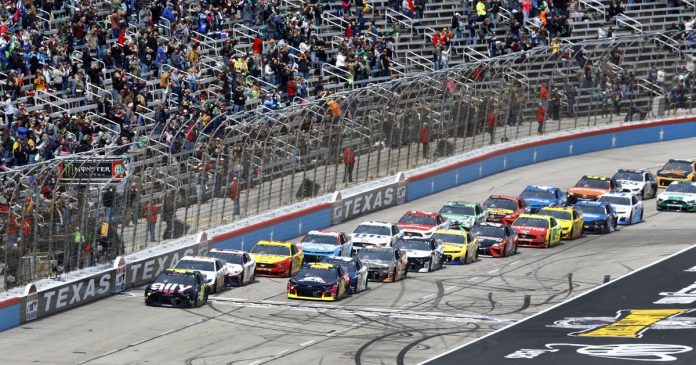 “It’s just miserable. Miserably hot,” said Buescher, chuckling at the prospect of strength-sapping heat during the O’Reilly Auto Parts 500 at Texas Motor Speedway on July 19. “It could very well be our hottest race of the year to-date, and possibly for the year.”

NASCAR’s Cup, Xfinity and Truck series originally were scheduled to compete on TMS’ high-banked/1.5-mile oval from March 27-29. The COVID-19 pandemic prompted NASCAR to shut down and retool its season, with TMS rebooked for the first big-time July racing weekend in its 23-year history.

Local weather forecasts call for ambient temperatures between 96-98 degrees next weekend, with heat indexes ranging between 105 and 110. The Cup race, scheduled for 334-laps/501 miles, will be televised at 2 p.m. (CDT) on NBC Sports Network. A Goodyear Racing engineer estimated track temperature at that time likely will read from 130 to 140 degrees.

“I have always wanted a hot, hot race where the track is slick and greasy,” TMS President/General Manager Eddie Gossage said. “That’s what these drivers want and they’re going to get it. It’ll be really interesting to see how this plays out because that’s their favorite condition — a slick, greasy racetrack.”

“We’re not coming close to that. I’m realistic about that,” Gossage said. “It’s not perfect. And these days we’re having a whole lot of ‘not perfect.’ But if we can go to Major League Baseball games in Arlington for almost 50 years now and sit out in the sun, we can do it for one day at the racetrack.”

That said, what will temps be like inside a Cup car at TMS?

“It’ll be anywhere from the 140 to 150 range, conservatively,” said Denny Hamlin, defending champion of this event and a four-time winner in 2020 wheeling the No. 11 FedEx Freight Toyota Camry fielded by Joe Gibbs Racing. “You’re probably looking more in the 150 range, so it will not be easy for sure.”

Buescher, 27, cut his racing teeth in Legends Cars during the heat of summers past on the Lil’ Texas Motor Speedway oval.

“I’d say we’d be lucky if we only get to 150 degrees,” said Buescher, who is in his first season of driving the No. 17 Fastenal Ford Mustang fielded by Roush Fenway Racing. “NASCAR’s been keeping up with temperatures inside race cars and we’ve seen thermometers mounted to our headrests the last couple years. The hottest I’ve ever seen was 158 numerically — but I did see one of our thermometers just say HOT. And so I want to know at what temperature it just goes to HOT. If it’s 100 degrees outside ambient temp, I’d say we’re definitely looking at somewhere in the 150-160 range inside the car. It’s very difficult to concentrate, especially by the end of these races.”

Hamlin, 39, said he might drop 11 pounds off his 170-pound frame during a four-hour race. “You don’t beat the heat. You’re not going to beat it,” said Hamlin, a three-time Cup winner at TMS. “From my perspective, the humidity is the biggest factor when it comes to how I feel in the race car. If it’s just temperature and not humidity, I can handle it. Humidity — that really drains the fluids out of you.”

Gossage recalled the old-school method “Alabama Gang” legends Bobby Allison and his late son, Davey, dreamed up to prep for races in the South. “They actually used to ride around in the summer with the windows in their (street) cars rolled up to try to get themselves in shape for Sunday,” Gossage said. “They were famous for doing it, and to give people an idea of what it’s like — that’s it.”

Buescher said that sounded like the sauna he used in the past as a training tool. “But I’m not going to get in a vehicle and turn the heat on with a sweatshirt on and drive around,” Buescher said with a laugh. “If there’s AC in a vehicle, I’m going to use it.”

John Sturbin is a senior writer at RacinToday.com, based in Fort Worth. He can be contacted at jtsturbin@racintoday.com.

To view subscription options for The News and SportsDay, click here.