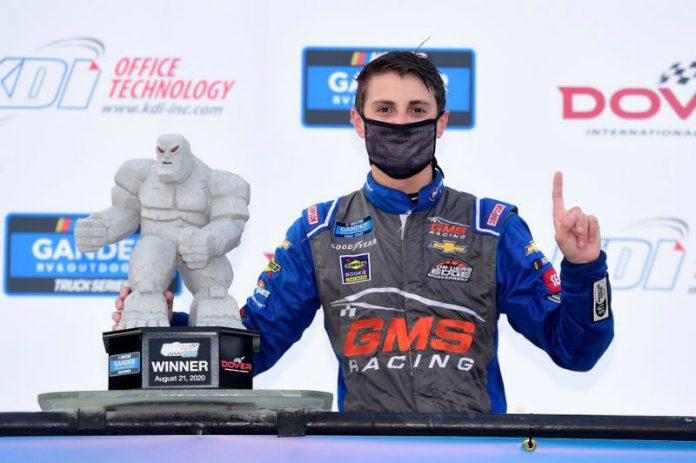 Rookie Zane Smith held off Matt Crafton and Brett Moffitt in the last three laps to win his second race this season in the NASCAR Gander RV & Outdoors Truck Series, on Friday. There was a late restart at the Dover International Speedway with three laps to go in the race but Smith held on for the win. This is his second victory in the last three races and Smith has hit good form at the right time as the playoffs come closer.

“What an awesome truck. I think we all know that I suck at restarts, but I picked a good time to have a good one. Man, two wins. This is by far the most fun I’ve ever had racing in my career. I’m just so blessed to be here,” Zane Smith said after the race.

Zane Smith keeps his calm in a dramatic race

Smith had a lead of over 1.5 seconds over Moffitt when the final caution came out. Stewart Friesen spun on Lap 192 to cause the caution and thus, a restart. Smith then kept his cool and his focus to cross the finish line by .989 seconds over Crafton, who grabbed second place from Moffitt.

Smith won the second stage and was leading on Lap 98 before he lost his lead as he seemed to spin his tires as Christian Eckes took the lead. He later clarified that he did not spin and restarted in the second gear and that Eckes went for the move early.

Challenge on restarts and of trucks

With his win, Zane Smith also won the second race in the Triple Truck Challenge. He earned a bonus of $50,000 as a result. “Hopefully, I can pay off my Chevy Silverado,” Smith jokingly said of the same.

Todd Gilliland finished in fourth place and added to his lead over Derek Kraus in the Truck Series playoff race. Gilliland currently holds the tenth and final spot for the playoffs with three races to go.

Getting back to work – News – The Register

Video Of A Truck Crashing Into A Helicopter In Brazil Viral...