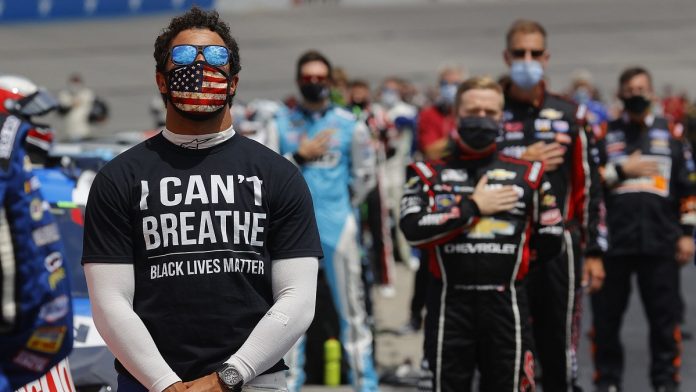 NASCAR, long a symbol of Southern heritage, has become an unlikely battleground in the debate over whether the Confederate battle flag still has a place in America.

The decision earlier this month to ban the Confederate flag from racing venues was cheered by sponsors and jeered by vocal fans – many under the hashtag #DefundNASCAR, a slam at the Black Lives Matter call to #DefundThePolice. Fans waved the red-white-and-blue battle flag, seen by many as a celebration of slavery and white supremacy, outside the Talladega Superspeedway in Alabama last weekend, and they’re expected to do the same this weekend at Pocono Raceway in Pennsylvania.

“This isn’t just about the Confederate flag,” said John Miller, co-author of “Motorsports and American Culture: From Demolition Derbies to NASCAR” and an associate professor at Longwood University in Farmville. “This is the tipping point. NASCAR is saying ‘We can’t afford to equivocate any longer.’”

The latest controversy over racist symbols, revived by the Black Lives Matter movement, boiled over after reports last weekend that a noose was found hanging in the garage assigned to the only black NASCAR driver, Bubba Wallace. The FBI said Tuesday that the loop was used to pull closed a garage door and had been in place before the stall was assigned to Wallace. The rope appears in the background of photos from last October. NASCAR said Thursday that it had found no other garages, at any other NASCAR track, with a similar pull rope.

Wallace told Bloomberg’s QuickTake on Thursday that in the past, he had demurred when asked about the Confederate flags at racetracks.

“Knowing that they did all that intensive research…to back up the point that there was a noose in my garage just shows the character of @NASCAR.” @bubbawallace reacts to probe that revealed his garage stall was the only one out of 1,684 with a rope pull fashioned like a noose pic.twitter.com/1yc3pUd5jm

“I was always quick to say: ‘I don’t even see the Confederate flags. I pay attention to the checkered flag,’ just kind of giving the politically correct answer,” Wallace said. “Seeing how the world is changing, how much people want change and inclusion, and want to feel wanted, it felt right to stand up and encourage NASCAR to take swift action to remove the Confederate flag.”

NASCAR has long struggled to expand its fan base from the South across socioeconomic and regional divides. Public stands against racism are one step.

In 2015, the organization asked fans to stop displaying the Confederate battle flag at races, but it remained ubiquitous. Earlier this year, officials quickly suspended driver Kyle Larson after he used a racial epithet in an audio live stream. They issued strong statements condemning Larson’s behavior. They later endorsed the Black Lives Matter movement.

NASCAR officials, drivers and many fans after the rope was discovered expressed support for Wallace as he emblazoned his No. 43 racecar with Black Lives Matter symbols.

Bubba Wallace takes a selfie with other drivers who pushed him to the front of the grid as a sign of solidarity at Talladega Superspeedway on June 22. (Chris Graythen/Getty Images)

In 2019, NBC reported its broadcast of the NASCAR Cup championship race brought in 3.7 million viewers. That’s a 51% drop since 2015. About three-quarters of the fan base is white and not Hispanic, only a modest decrease from 80% in 2011, according to Nielsen Scarborough.

NASCAR is not the only brand trying to distance itself from racist symbols this month. PepsiCo announced it will change the name of its Aunt Jemima pancake mix and syrup. Mars Inc. said it is reviewing the Uncle Ben’s Rice branding, which features the face of a smiling Black man.

The National Collegiate Athletic Association doesn’t want its logo to appear alongside the logo of the Confederacy. It has banned from hosting championship events all schools in Mississippi, which features the Confederate emblem on its state flag. Coaches at the University of Mississippi and Mississippi State University have lobbied the state legislature to change the flag, while star running back Kylin Hill at Mississippi State has pledged to not represent the school without a change to the flag.

The National Football League has switched sides on the issue of protesting systemic racism since 2016 and 2017, when quarterback Colin Kaepernick took a knee during the U.S. national anthem to oppose police brutality. The league at one point banned the protests but this year reversed its policy and will allow players to protest during the anthem. The NFL is revamping its Rooney Rule to try to hire and retain more Black coaches.

To some degree, NASCAR’s problems are partly self-inflicted because of a push in the 1970s to solidify the loyalty of its then-primary audience by emphasizing Southern roots and traditions, said Miller, who studies NASCAR as part of his interest in American culture. Taking a stand on banning the flag and backing Wallace mark the clearest departure yet from Southern heritage, he said.

“Bubba Wallace has been in The Washington Post, and even The New York Times, like three or four times this past week,” Miller said. “When’s the last time a NASCAR driver has ever done that that hasn’t died? If people are looking and seeing there’s an African American driver in NASCAR, and it’s getting more progressive, maybe more people will start tuning in.”

The challenge for NASCAR is its fans who cling to the Confederate flag. But, said Wallace in the interview Thursday, “We don’t want those fans anyway.”

“If you don’t want to take the time to educate yourself and see how people are offended,” he added, “then we don’t want you to be a part of our sport.”

When NASCAR asked fans in 2015 to leave Confederate gear at home, “It sounded good, but it never really went anywhere,” said Mark Howell, a communications professor at Northwestern Michigan College and author of the book “From Moonshine to Madison Avenue: A Cultural History of the NASCAR Winston Cup Series.

He said a true flag ban will be hard to enforce. Flags on pickups are easy to screen at the gate, but on a normal race day, not limited by coronavirus precautions, there can be 200,000 fans at a track and hundreds in the infield in a party atmosphere. It would be hard to prevent every Confederate flag in such a setting.

“How far can or will you take it?” Howell asks. “What do you do with a T-shirt? What about a cornhole set in the infield?”

NASCAR’s corporate partners are offering support during these trying times. The sport’s premier sponsors, Anheuser-Busch, Coke, Geico and Xfinity, said in a joint statement they “stand behind the important and necessary steps that NASCAR is taking to combat racism in the sport,” adding “there is still much work to be done.”

The maker of M&M’s and sponsor of last year’s NASCAR Cup Series champion Kyle Busch, thanked NASCAR for the support it has shown for Wallace and said it will continue to hold the racing league and other partners accountable for diversity and inclusion efforts.

Black NASCAR drivers have been rare. Wendell Scott was the first Black driver to start a NASCAR race, when he took the racetrack in Spartanburg, South Carolina, in 1961. He faced taunting, spitting, isolation and stony silence his entire racing career. So did Willy T. Ribbs, the lone black driver during the 1980s, and Bill Lester, who joined the NASCAR truck series in 2002. When Wallace won his first NASCAR truck series race in 2013, it was the first victory for a Black driver since Scott, 50 years earlier.

Some fans still want to bring Confederate baggage to the raceway, but Wallace has seen this week that plenty of sponsors are eager to leave it behind and put their logos on his car.

“The phones have been ringing off the hook for my team behind closed doors,” he said.

LIVE: Road shut in both directions as ‘van falls off vehicle...

Coronavirus: When will dining rooms reopen? For L.A. restaurants, the wait...