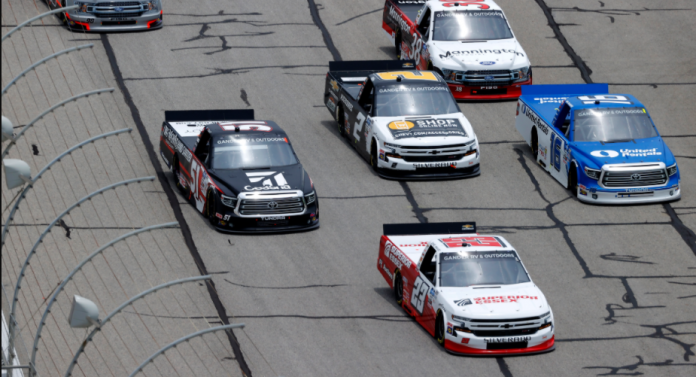 Is everyone recovered from last night’s Cup Series regular season finale and the crushing disappointment of Jimmie Johnson missing the playoffs?

Good, because we’re right back to racing action today, as the NASCAR Truck Series rolls into Gateway Motorsports Park, or World Wide Technology Raceway, if you want to be technical.

Here at RotoBaller, we want to help you make informed decisions about your DFS lineups, which is why I’ll be breaking down the slates for the Truck Series. Let’s look at some NASCAR Truck Series DFS lineup picks for the CarShield 200 on DraftKings. Be sure to also check out our NASCAR Premium Tools for Truck Series including our DFS Lineup Optimizer and powerful Research Station.

Editor’s Note: With NASCAR back and revving, it’s time for you to win big with RotoBaller and join in on the fun with our other NASCAR DFS winners! Subscribe to our NASCAR DFS Premium Pass and get exclusive access to DFS Cheat Sheets, a powerful Research Station, the DFS Lineup Optimizer for NASCAR Cup, Xfinity and Trucks contests. Plus DFS driver rankings from 19-time DFS tournament winners Drew Deen and Sean Engel.

Be sure to also check out all of our other weekly NASCAR DFS articles and analysis to help you set your optimal DFS lineups on DraftKings and FanDuel.

Creed’s the highest-priced driver on this slate, but his place differential upside starting 17th is nice, and while he’s going through a bit of a rough patch with three finishes outside of the top 20 in the last four, he also has a pair of wins this year.

Creed finished seventh in this race last season, plus in 2018 won from the pole in his only ARCA start here, leading 85 of 120 laps. This is a good track for Creed, and his low starting spot makes him the highest upside play in the entire field.

Yes, he’ll be a little chalky, but I think sometimes you have to ride the chalk, you know?

The only driver I’m recommending to start in the top 10, Gilliland’s lack of place differential upside is made up by the fact that he’s running well right now, with two top fives in the past three races, including a fourth at Dover, a track that seems to be a good indicator of potential Gateway success.

In three Truck Series races here, Gilliland has a pair of second place finishes, and while he only led one lap in those two races, his ability to run up front at this particular track is encouraging, especially when Gilliland didn’t run as well for Kyle Busch Motorsports over the past few years as expected. Yes, his current equipment is worse than what he drove at KBM, but this is still a strong place for him.

Did you know RotoBaller has a Premium DFS NASCAR subscription?

Like what you’re reading? You can show your support for Justin by using promo code CARTER when purchasing a NASCAR Premium Pass. You get 10% off and full access to all of our Premium NASCAR articles, DFS tools, and Lineup Optimizer!

Enfinger has two top 10s at Gateway, and he led 36 laps in the race where he didn’t finish in the top 10.

If he keeps this 98 truck clean, Enfinger will drive his way up into the top five and potentially fighting for the lead. He led 52 laps last year before finishing sixth.

I do think that his upside isn’t as high as it was in the last couple of years here because he doesn’t start on the front row, which seems to be where you want to start if you want to lead a lot of laps here. But at his pricing, I think Enfinger’s a solid choice.

Majeski has DNFs in two of the last four races, which is a concern since those were mechanical issues. Hopefully, Niece Motorsports isn’t starting to have some issues with their equipment.

But in races without a DNF, hasn’t finished outside of the top 20 this year, and he has a pair of top 10s. If the truck stays in one piece, Majeski is almost a lock to finish top 15, with the upside to sneak his way into the top 10.

Last week, Mayer has significantly cheaper in his first race of 2020, and after starting 26th, finished 15th.

This week, he starts 15th and his price has jumped a bit, making him a lot less of a value option. But among drivers in this price tier, the two I’m most interested in are Mayer and Carson Hocevar, and I settled on Mayer because he has better equipment.

Mayer raced here last night in ARCA, starting and finishing third. He also finished third in the 2019 ARCA race at this track. He’s run here in K&N as well, as all of his prior experience here should help him have a solid run on Sunday in the GMS 24 truck.

This is the truck that Brennan Poole had been running, a truck that had top 20 upside. Now, Danny Bohn is in it. He ran three races for this team at the end of last year, with an eighth at Martinville and then two finishes outside of the top 20.

Poole ran 11 races for this team this season, with seven top 20s. In the other four races, he DNFed. So, whenever the truck finished, it finished at least 19th.

I think Bohn might be a step down from Poole, though I mainly say that because I don’t know much about him. He’s mostly a modified driver, so adjusting to the Truck Series isn’t necessarily the easiest transition.

But still, his DFS price is so low. If he can approximate what Poole did in this truck, he’ll be a really strong value play.


NASCAR is back, and it’s time for you to win big with RotoBaller!

Drew Deen is an 11-time DFS tournament winner, and has 13 different $3k+ contest finishes – 10 of them coming from NASCAR, including the 2020 Auto Club 400 on March 1st and the 2020 Food City 500 on May 31st. Sean Engel, who won his sixth career tournament at Bristol, and had the top lineup in seven contests and 10 top-two finishes. Be sure to use their weekly NASCAR DFS rankings and DFS lineup picks, updated regularly.

Chase Holden’s DFS picks at Martinsville and Texas were tops in the industry, and Chase was a 2019 FSWA finalist for NASCAR Writer Of The Year! Two-time Racing Writer of the Year finalist and fantasy industry legend Scott “The King” Engel is also in the crew.

Set your winning DFS lineups with our award-winning team.