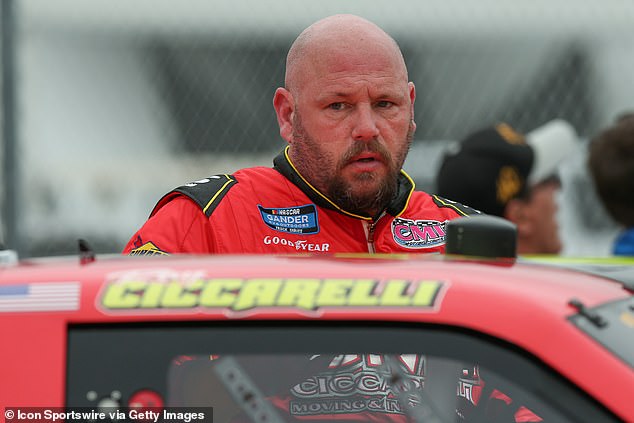 A NASCAR Truck Series driver is planning to quit the sport at the end of the season after the company banned the Confederate flag and memorabilia from its races amid national uproar over last month’s police killing of unarmed black man George Floyd.

Truck Series driver Ray Ciccarelli wrote on his Facebook page following Wednesday’s announcement that he refuses to be drawn into ‘any political BS.’

‘I don’t believe in kneeling during Anthem nor taken (sic) ppl right to fly what ever (sic) flag they love. I could care less about the Confederate Flag but there are ppl that do and it doesn’t make them a racist all you are doing is [expletive] one group to cater to another.

‘I ain’t spend the money we are to participate in any political BS!! So everything is for SALE!!’ 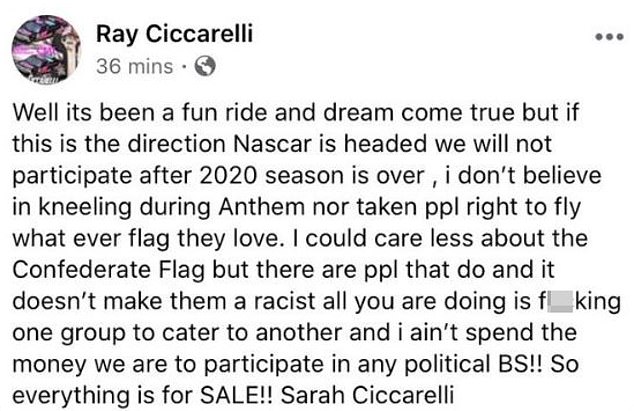 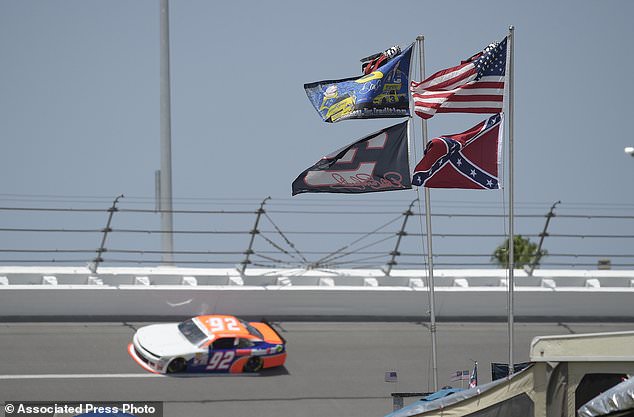 Ciccarelli wasn’t the only person in the stock car racing world to object to NASCAR’s decision.

NASCAR helmet artist Jason Beam tweeted ‘ignorance wins again, NASCAR you realize the North had slaves too, lol not just the South, you want to remove the American Flag as well, idiots.’ And a publicist for one NASCAR driver tweeted the decision was ‘a joke.’

While the Confederate flag remains a symbol of southern pride to some, its history is inextricably linked with slavery and the racist motivations behind the secession of the southern states in 1860.

As Confederate Vice President Alexander H. Stevens infamously said at the onset of the Civil War: ‘Our new [government’s] foundations are laid, its cornerstone rests, upon the great truth that the negro is not equal to the white man.’ 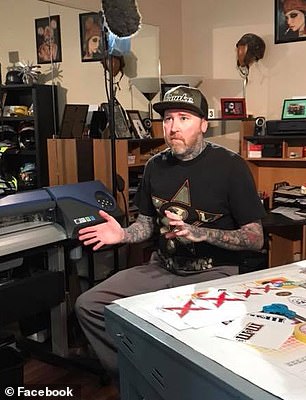 NASCAR helmet artist Jason Beam tweeted ‘ignorance wins again, NASCAR you realize the North had slaves too, lol not just the South, you want to remove the American Flag as well, idiots’

For more than 70 years, that flag was a common and complicated sight at NASCAR races. Through the civil rights era right on through the season opener at Daytona in February, the flag dotted infield campsites and was waved in grandstands by fans young and old.

The issue was pushed to the forefront this week by Bubba Wallace, NASCAR’s lone black driver and an Alabama native who called for the banishment of the Confederate flag and said there was ‘no place’ for it in the sport.

‘This is about our brothers and sisters that are suffering through a lot,’ Wallace told ABC’s Good Morning America on Thursday. ‘You look at the Confederate flag and how, yes, it may mean heritage to most, but to a group that is in a lot of pain right now — the African American community is in a lot of pain — that’s a symbol of hate. And it brings back so many bad memories, signs of oppression from way back when.

‘There’s just no good that comes with that flag,’ he continued. ‘That’s the message we’re trying to get across. It’s not about you. It’s about a group of people that we are trying to bring together and make this world a better place.’ 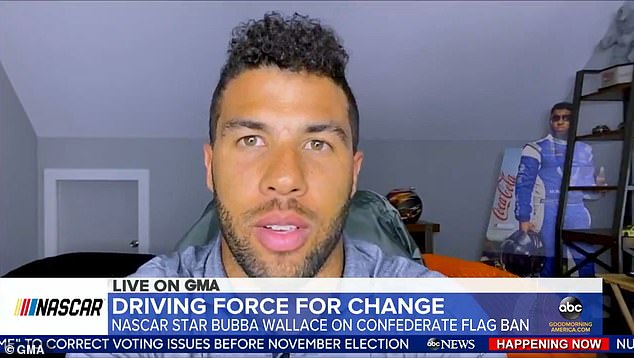 The issue was pushed to the forefront this week by Bubba Wallace, NASCAR’s lone black driver and an Alabama native who called for the banishment of the Confederate flag and said there was ‘no place’ for it in the sport 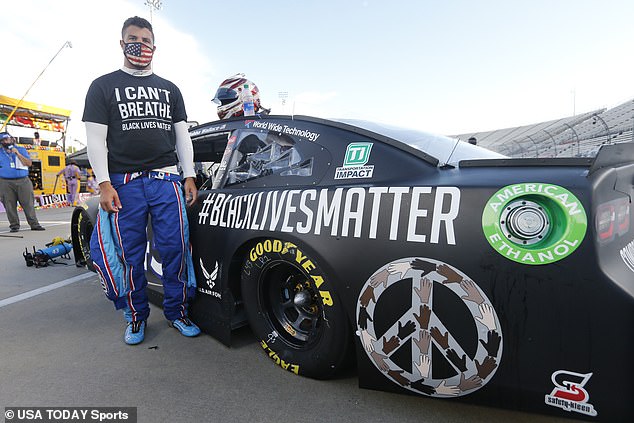 The ban was announced before Wednesday night’s race at Martinsville Speedway in Virginia, where Wallace drove Richard Petty Motorsports’ No. 43 Chevrolet with a #BlackLivesMatter paint scheme.

Wallace, wearing an American flag mask, clapped his hands when asked about the decision before the start of the race. 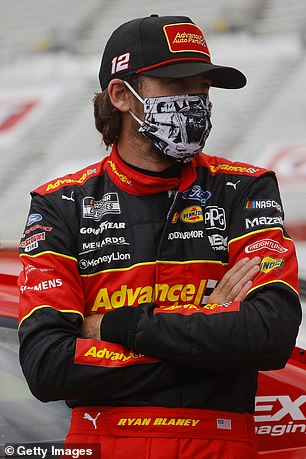 NASCAR driver Ryan Blaney said he’s standing by Wallace: ‘I’m really proud of what he’s doing, the effort he’s putting in and wanting to kind of lead the charge’

‘It’s been a stressful couple of weeks,’ Wallace said on FS1. ‘This is no doubt the biggest race of my career tonight. I’m excited about tonight. There’s a lot of emotions on the race track.’

He finished 11th and shifted straight to an interview on ESPN’s ‘SportsCenter.’

Wallace wore a black ‘I Can’t Breathe’ T-shirt but did not kneel during the national anthem.

His Chevy had ‘Compassion, Love, Understanding’ emblazoned on the hood. Bernice King, the youngest daughter of Martin Luther King Jr., tweeted ‘#NASCAR, family’ after the announcement, and scores of athletes followed the race on social media. The NAACP applauded NASCAR for taking the necessary step to ‘remove symbols of hate, racism, and discrimination from their events.’

Floyd, a black man, died May 25 after a white Minneapolis police officer pressed his knee into Floyd’s neck while Floyd was handcuffed and saying that he couldn’t breathe. His death sparked protests that have roiled the nation for days, and Confederate monuments are being taken down across the South – the traditional fan base for NASCAR. 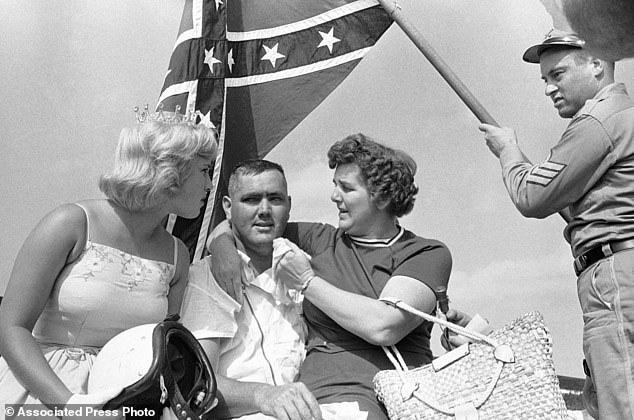 In this 1962, file photo, a confederate flag is held behind Junior Johnson of Ronda, North Carolina as he poses with his sister, right, and Ginger Pointevint, Miss Sun Fun USA, left, in the winner’s circle after the Southern 500 auto race at Darlington Speedway in South Carolina 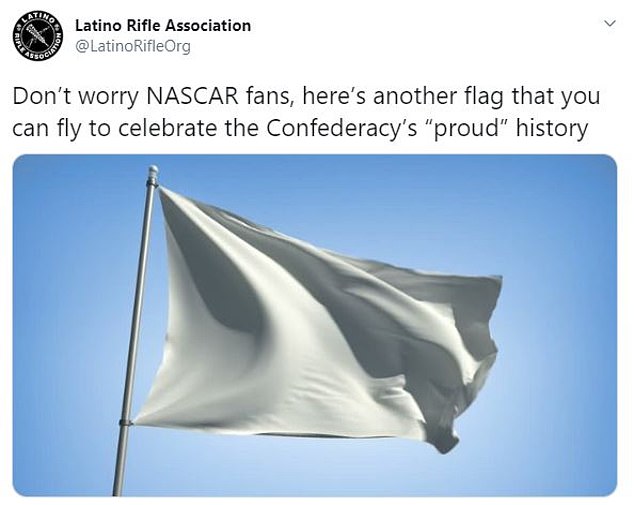 ‘The presence of the Confederate flag at NASCAR events runs contrary to our commitment to providing a welcoming and inclusive environment for all fans, our competitors and our industry,’ NASCAR said. ‘Bringing people together around a love for racing and the community that it creates is what makes our fans and sport special. The display of the Confederate flag will be prohibited from all NASCAR events and properties.’ 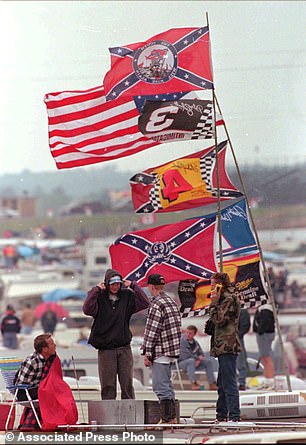 Enforcing the ban could require added security in the often rowdy, booze-fueled infield filled with fans who may be intent on thumbing their nose at NASCAR. The series declined additional comment

Enforcing the ban could require added security in the often rowdy, booze-fueled infield filled with fans who may be intent on thumbing their nose at NASCAR. The series declined additional comment.

Fans have not been allowed back at races yet amid the coronavirus pandemic. It won’t be long: NASCAR plans to welcome a small number of fans at a race Sunday near Miami and more later this month in Alabama.

The controversy is not new for NASCAR.

Five years ago, the flag issue was front and center for NASCAR after nine black churchgoers were slain in Charleston, South Carolina. The man currently on death row for the murders, Dylann Roof, had embraced Confederate symbols before the attack, prompting a reappraisal of the role such symbols play in the South.

The NASCAR chairman at the time, Brian France, said the series was ‘working with the industry to see how far we can go to get that flag to be disassociated entirely from our events.’ Tracks offered to exchange Confederate flags for American flags, but there were few takers and flags have continued to be seen at the events. 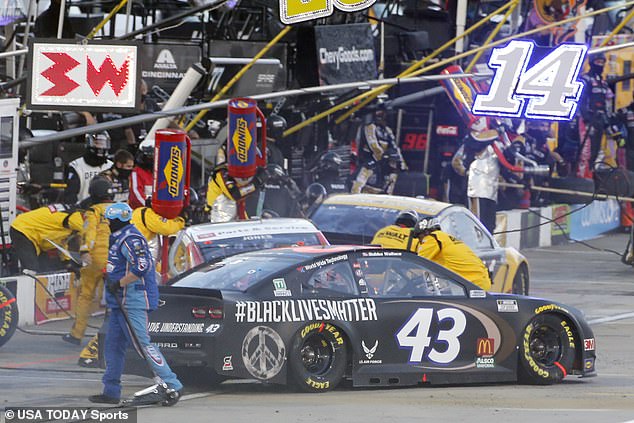 NASCAR’s checkered history with race took another blow when driver Kyle Larson was fired in April after he uttered a racial slur during a live-streamed virtual race.

Led by Wallace, some of NASCAR’s stars have forged ahead ready to create what they hope is a new legacy in the sport. Several drivers – including two-time Daytona 500 champion Denny Hamlin – said they supported Wallace in his quest to rid the sport of the flag.

Ryan Blaney, one of Wallace’s best friends, said after he finished second at Martinsville that he stood by Wallace.

There’s just no good that comes with that flag

‘I’m really proud of what he’s doing, the effort he’s putting in and wanting to kind of lead the charge,’ Blaney said. ‘I stand behind him. A lot of guys stand behind him. Not only the drivers, but a lot of teams, as well. Crew members. The car he ran tonight was great. I loved that he was able to do that and come up with that idea.’

The predominantly white field of drivers united over the weekend for a video promoting social change. A black NASCAR official, Kirk Price, took a knee before Sunday’s race near Atlanta in what may have been a first for the series. NASCAR President Steve Phelps addressed the drivers before that race and vowed to to do a better job of addressing racial injustice in the wake of Floyd’s death.

‘Phelps and I have been in contact a lot just trying to figure out what steps are next,’ Wallace said. ‘And that was a huge, pivotal moment for the sport. Lot of backlash, but it creates doors and allows the community to come together as one, and that’s what the real mission is here. So I’m excited about that.’