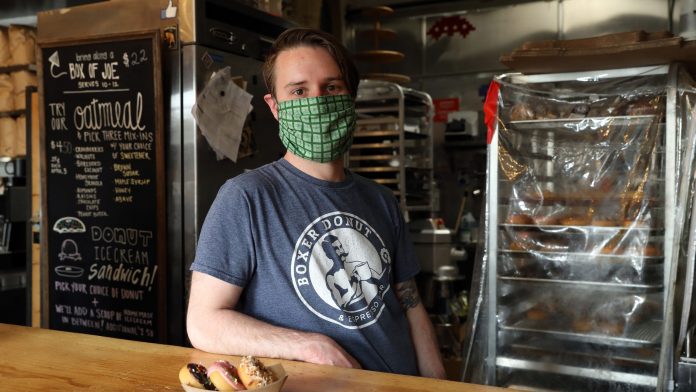 A look at Boxer Donut Espresso Bar in Nyack and Duck Donuts in Mamaroneck June 2, 2020.

Sales may be down at Boxer Donut and Espresso Bar in Nyack and Duck Donuts in Mamaroneck due to the coronavirus pandemic but spirits remain high, especially with National Donut Day fast approaching — it’s June 5.

Both will be offering specials — at Boxer, they’ll be bringing back their popular doughnut ice cream sandwiches (with housemade vanilla ice cream), while at Duck they’ll be offering a free cinnamon sugar doughnut to those who visit or order online — but for each of them, it’s more about serving the community and doing the best they can to maintain normalcy.

Neither place has laid off staff, though shifts and hours were reduced, and both owners — Eric Brown at Boxer and Bonnie Foncello at Duck — say the support they’ve gotten from their customers these last few months has been invaluable to their business.

What follows is a tale of two doughnut shops.

A customer orders at the door of Boxer Donut and Espresso Bar in Nyack June 2, 2020. After a short break during the pandemic, the shop reopened for curbside pickup with limited menu and limited hours. (Photo: Tania Savayan/The Journal News)

REBUILDING AMERICA: The future of restaurants

WHO NEEDS A HAIRCUT? See who’s getting an appointment first

Coffee aficionado Eric Brown was one of the first hires at Gypsy Donut when it opened in 2012. A devoted employee who quickly segued from barista to manager, he was thrilled to buy it when the owners decided to sell. That was three years ago. Rebranded as Boxer Donut and Espresso Bar, the Nyack shop, with a comfy couch designed for lounging, is known as much for its commitment to handcrafted donuts (both yeast-raised and cake-based) as it is for its attention to making the perfect cup of joe using Stumptown Coffee Roasters.

Life before the coronavirus: Brown and his staff served 1,500 to 2,000 doughnuts a week and 2,000 to 3,000 cups of coffee. On a given day, there were 15 varieties of doughnuts, made fresh that morning — everything from maple bacon to old fashioned sour cream as well as a host of seasonal creations such as strawberry black-pepper jam, blueberry sage jam, the Elvis (banana custard, bacon and peanut butter) and raspberry cinnamon jam. Many of his jam-based creations were made with local fruits from the Nyack Farmer’s Market.

Life during the coronavirus: He closed for two weeks in mid-March to regroup and put into practice the kind of safety precautions that would make both his staff and customers comfortable. He also spent a lot of time applying for the small business Paycheck Protection Program (PPP) which he “luckily” got in the first round. “It took about 10 tries,” he said. “But once I got it, it was a life saver.”

A trio (toasted coconut, strawberry sprinkle and chocolate sprinkle) of mini doughnuts at Boxer Donut and Espresso Bar in Nyack June 2, 2020. After a short break during the pandemic, the shop reopened for curbside pickup with limited menu and limited hours. (Photo: Tania Savayan/The Journal News)

Brown also limited the options. While the full coffee menu remains unchanged, doughnut choices are now reduced to seven flavors, among them chocolate old-fashioned, plain, vanilla glazed, strawberry sprinkle, toasted coconut and maple bacon. Only mini doughnuts are served during the week as a way to be more efficient. On weekends, the larger varieties are available. Seasonal options are no longer on the menu.

In addition, Boxer sells homemade popsicles, oatmeal, cookies, muffins, granola bars and coffee beans along with a limited amount of groceries such as flour, sugar, dry yeast, cupcake liners and chocolate chips. (The groceries are a new development.)

While the takeout model is working, business is nowhere near where it had been prior to the pandemic. Brown guestimates he sells 400 to 500 donuts a week and approximately 500 cups of coffee. “Business is down about 60 to 70%,” he said.

And then there’s the truck: Brown had high hopes for his new doughnut and coffee food truck, which he announced on social media March 13. With 30 (now canceled) events lined up — mainly festivals and other large gatherings — he’s trying to rethink what he can do.

Most recently, he held a pop-up with Bongo’s Fries, another Nyack food truck, in the parking lot at Alexander Brothers Automotive in West Nyack and he’ll be serving coffee and doughnuts (gratis) to the medical staff at Montefiore Nyack Hospital on June 9 starting at 5:30 a.m.

Community Counts: The good news in all this, he said, has been the community. Tips for his staff have gone up 300% with many folks telling them to “keep the change.”

“The outpouring of support has been heartwarming,” he said.

In an effort to branch out — and show the community they care as well — Boxer released the recipe of its famous sourcream doughnut on its Facebook page, something they never would have done pre-the-coronavirus. And they may do more of that. Brown is playing around with items “beyond their wheelhouse” such as releasing a recipe for an artisan bread.

The doughnut ice cream sandwich at Boxer Donut in Nyack will be available on National Donut Day. You can order any variety of doughnut and have it sliced in half and filled with the shop’s housemade ice cream. (Photo: Submitted)

Future plans: With only eight seats inside, and therefore the capacity for only four seats when restaurants reopen to 50% capacity, Brown said takeout is here to stay.

This Duck, N.C.-based franchise, known for its warm, made-to-order doughnuts and colorful beachy ambiance (with lots of duck decor), opened its first Westchester location in Mamaroneck in January 2020. The store is owned by Armonk residents Dave and Bonnie Foncello, the latter of whom grew up in Mamaroneck.

Yadira Rios tops donuts for an order at Duck Donuts in Mamaroneck June 2, 2020. The shop has stayed open during the pandemic with social distancing guidelines in place. (Photo: Tania Savayan/The Journal News)

Life before the coronavirus: Lines were out the door on weekends and on weekdays, there would be a flurry of students after school. Since opening, the store sold more than it’s 440,000 doughnuts. Part of the fun was in the experience and watching your customized doughnut get made right in front of you. There was even a small ledge specifically designed for young children so they could climb up and watch the doughnut magic.

Life during the coronavirus: The store remained open, albeit with new safety precautions for staff and customers. The four stools that had been in the store were immediately taken out.

Sales were down approximately 60%.

As the pandemic wore on, Foncello adjusted their store hours, opening two hours later in the morning and closing an hour earlier in the evening (they are open six days a week from Tuesday to Sunday). In general, she said customers repeatedly told her how thankful they were for providing a sense of normalcy. The store also instituted delivery, curbside pickup and a new Duck Donuts rewards app.

Owner Bonnie Foncello with a selection of doughnuts at Duck Donuts in Mamaroneck June 2, 2020. The shop has stayed open during the pandemic with social distancing guidelines in place. (Photo: Tania Savayan/The Journal News)

Since a big part of the shop’s experience is being able to watch your doughnuts being made fresh in front of you, they offered a Duck Donuts Decorating Kit in April which gives children (and parents) the opportunity to create their own doughnuts from home. “It makes a great Zoom birthday party activity as kids can decorate their donuts ‘together’ while social distancing and remaining safe,” said Foncello.

Serving front-line workers: As part of the company’s “Sprinkle Happiness” initiative, Foncello, her staff and community members, delivered doughnuts and coffee several times a week to several nearby hospitals including White Plains, NewYork-Presbyterian Lawrence, and Northern Westchester along with to local police departments and EMS.

A s’mores doughnut, part of a limited-time assortment of campfire doughnuts at Duck Donuts in Mamaroneck June 2, 2020. The shop has stayed open during the pandemic with social distancing guidelines in place. (Photo: Tania Savayan/The Journal News)

Future plans: Foncello anticipates in-store traffic to increase as the state reopens though the shop will continue with curbside pickup and delivery through online ordering.

Said Foncello: “Our customers have been loyal and supportive but understandably it will be some time before we are back to ‘normal.'”

Digging for a living – Owner//Driver