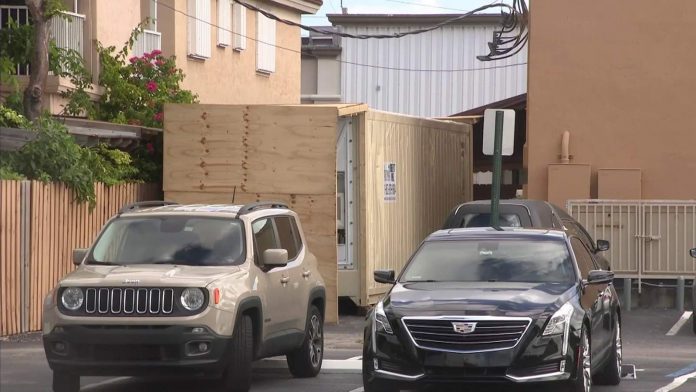 HIALEAH, Fla. – A disturbing situation has been unfolding in Hialeah after a funeral home began running out of space.

The facility has become so overwhelmed with COVID-19 victims it has begun using a refrigerated truck. Problem is that this temporary morgue is located right behind residential homes.

Neighbors told Local 10 news the truck arrived about a week ago, and they want it gone.

“I’m not okay and we’re going to keep fighting because that needs to go away,” said Liliana Acosta, who lives next to the Memorial Plan San Jose Funeral Home.

Acosta has owned her home in Hialeah for more than 20 years.

Her fence backs up to the funeral home and she said she’s never had an issue with them. That was, until a few days ago when the funeral home brought in a refrigerated truck and parked it just inches from her back door.

“It’s what, two feet maybe? Less?” she said. “They told us that they have COVID bodies that were coming in and they were storing them in there because they’re at full capacity inside.

On Sunday, Acosta and her neighbors held a protest about the truck, saying they now deal with a nasty smell, constant noise from a generator and they worry they’re potentially being exposed to the virus.

But Hialeah Mayor Carlos Hernandez said the truck doesn’t pose a health risk, and the funeral home has complied with all city and health department rules.

“Right now, we’re seeing it, not only from coronavirus but people are dying from other things, and these are people’s parents, somebody’s children, somebody’s grandparents, so we have to respect those people and we have to work through this,” said Mayor Hernandez.

“While there is no risk, which we have demonstrated to health officials, elected officials and police when they inspected the facility, out of an abundance of understanding and compassion for our neighbors, we have worked with the Mayor and other officials to shift the location of our special care facility away from our neighbors to the other side of our property.”

According to the funeral home, that refrigerated truck will be moved to another part of the property sometime in the next two days.

However, Acosta and her neighbors told Local 10 that moving it isn’t good enough. They want it gone.