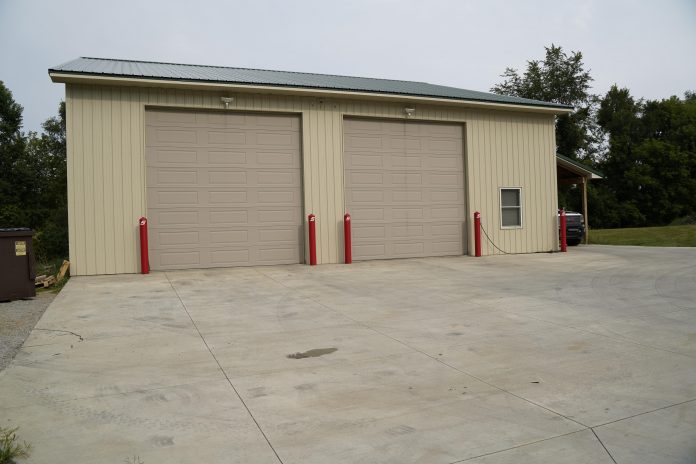 CLINTON TWP. — An ugly fight between a home-based business in Clinton Township, the township and the neighbors who want to see it moved out of their residential neighborhood will likely play out in the courts.

The Clinton Township Board at its next meeting Sept. 14 will vote on a planning commission recommendation not to grant a conditional-use permit for the Snap-on tool franchise of David and Brandy Lawler, who operate D&B Tools out of their 6-acre property in a private residential neighborhood.

The decision came after the planning commission denied the Lawlers’ application after a nearly two-hour meeting and public hearing on Aug. 27.

The meeting, held outside under a pavilion at Tate Park, was packed with residents and former residents of the Adams Drive neighborhood that the Lawlers live in and operate their business from, as well as many supporters of the Lawlers.

Starting with one Snap-on tools distribution truck, the Lawlers expanded their business rapidly to where three years ago they receive permission to build a two-bay pole barn and a lean-to on their property to store the materials brought to them, as well as their now three delivery trucks.

According to their neighbors, residents began to complain about noise and truck traffic because of the Lawlers’ business on their street and attempted to bring it to the township’s attention.

For a while, these complaints did not receive the township’s attention.

Clinton Township Supervisor Basil Greenleaf said in an interview that he first found out about the issue eight to 10 months ago and eventually discussed the issue at a township board meeting, trying to work things out between the Lawlers and the neighbors.

According to Greenleaf, David Lawler agreed to look for another place to house his business, and Greenleaf even suggested several places he could move to.

The township also gave the business six months to move, longer than the usual amount, due to the business’ size.

But as the six-month term was approaching an end, the township was informed that the Lawlers were not going to move their business.

The township proceeded with issuing a civil infraction ticket to the business on July 13.

The township’s attorney, Fred Lucas, said the ticket was issued because the business is in violation of the ordinance since any home occupation needs to have a conditional-use permit.

“Not to say that this qualifies as a home occupation, but I don’t even have to get to that issue because he doesn’t have a permit to begin with,” Lucas said in an interview.

The Lawlers then applied for a conditional-use permit, which had to be recommended to the township board by the planning commission if it met parameters set by the township ordinances.

At the planning commission’s public hearing on the permit application, neighbors and former neighbors described the disruption the Lawlers’ business has brought to the 10-residence neighborhood.

Sarah Roberts, a former resident of the neighborhood who recently sold her home and was formerly a friend of the Lawlers, said while it was fine when the business started with one truck, the business’ expansion began to cause problems.

“They are much bigger now and with that comes 18-wheeler trucks down our private road that is not properly finished and it is not paved. The trucks were trespassing on private property that is not part of Adams Drive, (and do) not have permission to use that property as a turnaround,” she said.

“I have four small children. … I lived there for eight years and at the beginning there wasn’t any truck traffic, no worries whatsoever. My kids were able to ride up and down the road, run in the road, no issues. … But there was times when 10 p.m. those Snap-on vehicles were coming down the road, they’re loud … they’re very loud,” Roberts said.

Bryan Stanley, a software engineer who also recently moved from the neighborhood but said he was there to lend support to his former neighbors, said that working from home, he kept track of the traffic in and out of the business and could support the complaints.

Stanley said that the property now has two 22-foot trucks, a box truck, enclosed trailer, forklift and two dumpsters. Semis also drive down the road making deliveries, sometimes as many as two or three a day.

The trucks are also power washed on Sunday mornings for four hours, which neighbors complained created a lot of noise.

Stanley said that looking at the township’s ordinances, the only thing he could find close to the type of business the Lawlers are operating was in industrial zones where it mentions the warehousing and distribution of materials.

Dana Yakubesan, who has lived on the street with her family for 15 years, said it used to be a very quiet neighborhood.

“Now we have these semi trucks coming down the road. We have truck drivers that talk like truck drivers so the little children can’t even be outside because they swear and the sound carries in the air. They pee on the side of the building, which has been witnessed by more than one person. It’s disgusting,” she said.

Not all residents were opposed to the Lawlers’ business.

Pamela Koehler, who said she lived next door, denied everything said by the other neighbors.

“Their trucks are extremely quiet. I don’t even know they’re going down the street … ,” she said.

Koehler also remarked on how clean and organized she thought their property looked.

“Everything they have is very well taken care of. It’s probably the nicest house on the street … ,” she said.

The Lawlers’ attorney, Phil Schaedler of Adrian, spoke about the success of the business and how the Lawlers have contributed to the Clinton community.

“When they’ve been asked to have their trucks decorated for the Christmas parade they’ve done that. When they’ve been asked to donate money to different outings — golf outings and other events in the community — they’ve done that,” Schaedler said. “They’ve been good citizens of Clinton Township. They pay their taxes, they mind their own business. From what I can gather, generally speaking, they get along with their neighbors pretty well.”

Schaedler argued that the Lawlers’ business met the requirements of the permit, which, among other things, requires the business to be secondary to the primary use of the property, which is as a residence. There also could be no showroom, catalog and on-site sales.

“These folks have a business. They want to continue to operate it there. The notion that they would move or that they had agreed to move, I’ve never heard that before, not until tonight. They want to stay right where they are. It would be extraordinarily expensive for them to move,” Schaedler told the commission.

He provided an affidavit showing that prior to building the pole barn, the builder had applied to the township for a building permit, describing what the pole barn was going to be used for and got it approved by the ordinance enforcement officer, Gary Couture, and building inspector, Kevin Arquette.

Schaedler also told the commission that it could approve a conditional-use permit with accommodations, such as requiring the Lawlers to build a truck turnaround on their property, enforcing delivery hours and screen their business off from neighbors.

After a brief discussion, the planning commission denied the permit on a unanimous vote.

David Lawler, displeased with the decision, said that he plans to continue fighting the township.

Lucas said the township is still waiting for a date to be set for the ticket in Lenawee County District Court.

The township board will vote to adopt or not adopt the planning commission’s recommendation at its next meeting at 6 p.m. Sept. 14 at the Robison Pavilion at Tate Park.

Authorities now considering whether charges are warranted against pickup driver who...