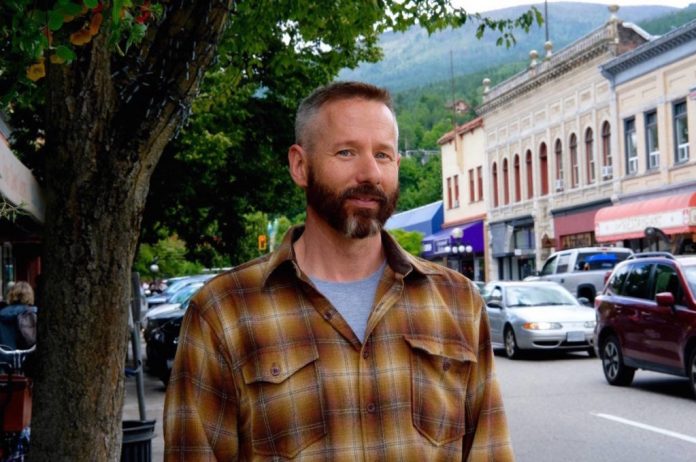 After being run over by a pick-up last week, Christoph Martens has surprisingly few injuries, considers himself lucky, and wants drivers to wake up. Photo: Bill Metcalfe Christoph Martens was riding his electric bike downhill on Creek Street in Nelson around noon on June 25, when without warning he found himself on the ground under a truck tire.

Approaching the T-intersection with Hart Street, he saw a pickup truck driving up Creek Street, entering the intersection from the opposite direction.

“I started to yell at him and veer away, up Hart Street [a steep one-way gravel street] and about two metres up the road I lost control of my bike. I’m on the ground on my back and yelling at the top of my lungs.”

Martens says he used to be a bike courier in his 20s, and took the Motor Vehicle Act training required for that, and has been cycling ever since. So he knows the law and knows how to handle a bike.

By turning up Hart Street, the truck was driving the wrong way up a one-way street.

With Martens lying on his back, the front tire of the pickup ran over his shins and his pelvis and then turned right, missing his stomach and head, then stopped, leaving him lying between the front and back tires.

“The driver thought he had hit a dog and was terrified to see a human. He was in as much shock as I was. He obviously had no intention of hurting anybody. He said I came out of nowhere. But I did not come out of nowhere. I told him in no uncertain terms where I came from. It was not very pleasant. I have no patience with inattentive drivers.”

Martens dragged himself to the side of the road, “full of adrenaline,” not sure how badly hurt he was.

By the time he got to the hospital he realized he was surprisingly uninjured, and a medical checkup confirmed this.

“Just bruised muscle on my leg, that’s the worst of it, and it’ll take a while for that to heal. But other than that, nothing major, just lots of bruises and scrapes. I’m just fortunate that I’m strong. Another person might have been crushed. I was lucky I was lying in a very stable position. If I had been on my side, or if he had gone over my stomach or my neck or a joint, it would have been a very different outcome.”

Police gave the driver a ticket under the Motor Vehicle Act for failing to yield the right-of-way on a left turn.

Martens says he expected the more serious charge of driving without due care and attention.

“The constable I spoke to said it would be hard to prove this in court should he decide to appeal. She could have given him a second penalty, in addition to failure to yield, for driving up a one-way road but she chose not to because the driver seemed extremely apologetic.”

The bike was damaged and the accident is now an ICBC claim.

Martens says in his experience many drivers are blind to bikes when they would see a car in the same situation.

“His subconscious would have triggered him to stop. But a bicycle does not trigger the subconscious. He was asleep to the form that I took in front of him.”

How can drivers become more aware of bikes?

He says he often gets yelled at by drivers for exercising his legal right to travel as a vehicle in a lane.

“Cyclists have every right to be there, and people don’t understand that.”

“I feel really fortunate. In many ways it’s the luckiest day of my life.”

Under the Hood: Picking the right pickup for trailer hauling |...