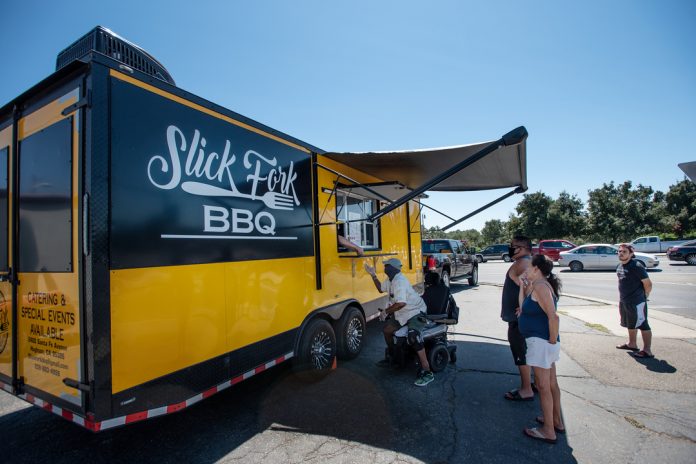 Food trucks have been hot — both figuratively and literally, given this is summer in the Central Valley — for a while now. But thanks to the ongoing coronavirus pandemic, they’re hotter than ever.

Demand for mobile food vendors across the valley has skyrocketed as they partner with local breweries and bars to allow them to stay open while under shutdowns meant to slow the spread of the COVID-19 outbreak.

Into that mix has come two new food trucks from familiar names in the region. Slick Fork BBQ, a Hughson barbecue joint that opened in 2018, and Super Sope, a Turlock-based catering company, both have new food trailers on the street and they’re already in high demand.

Slick Fork BBQ has parked its new bright-yellow trailer on the corner of Scenic Drive and Coffee Road in Modesto. They easy-to-spot location has already brought in several passerby and word-of-mouth, sometimes straight from the street as I noticed during a recent visit, has only grown since it’s been open the past couple weeks.

The 30-foot trailer serves up the restaurant’s signature low-and-slow smoked meats, including its popular Texas-style brisket which smokes for 18 hours. All the meats are smoked at owner and pitmaster Kevin Bradley’s Hughson restaurant, which serves as home base for all the cooking. The mobile menu includes all of the favorite from meat plates served with sides to sandwiches (meat plates $6 to $12, sandwiches $10 to $12).

The trailer serves brisket, tri-tip, pulled pork, pork spare ribs, sausage and quarter chicken. Another popular option has been the brisket bowl, which is mac-and-cheese topped with brisket and barbecue sauce ($8). Bradley also plans to add tacos and loaded fries to the trailer soon, for easy grab-and-go lunch fare.

Bradley originally got the mobile trailer late last year to work the festival and fair circuit. He has also planned to be on site for Modesto Junior College home games. But, thanks to the global pandemic wreaking havoc on everyday life and business, he shifted modes quickly this year instead.

The trailer has been parked at the busy Modesto corner, in front of the Fox’s Discount Foods grocery store, for a couple weeks now. And he said it has been great advertising for this brick-and-mortar restaurant as well, which sits at the corner of Santa Fe and Hughson avenues. The restaurant has been open for takeout throughout the pandemic, and has exclusively outdoor seating for those who want to dine on site.

“You’d be surprised how many people come to the truck here in Modesto and don’t know where Hughson is or have never been through Hughson,” Bradley said. “The demand for this (trailer) has been crazy.”

The trailer is typically on site for lunch from 11 a.m. to 4 p.m. (or sell out) Thursday to Saturday. He has hired three more employees, doubling his staff, to work the restaurant and trailer.

The increased demand for food trailers is thanks to the ongoing indoor dining shutdown in many California counties, including Stanislaus County. With dining rooms off limits, outside dining has boomed instead as all the umbrellas, canopies and pop-up tents sprouting up on city sidewalks and restaurant parking lots can attest. Breweries and bars have turned themselves into restaurants by bringing in food trucks.

Craft beer makers from the new Dying Breed Brewing in Oakdale to Contentment Brewing in Modesto are taking advantage of their outdoor seating areas and leaned heavily on food trucks like Slick Fork BBQ and the also new Super Sope, as well as many others.

If the latter sounds familiar, it’s probably because you already saw a version of it in action on the hit Food Network reality competition series “The Great Food Truck Race.” The show, which was filmed last summer, began airing in late March on the cable cooking channel.

Turlock resident Carina Stringfellow led the Super Sope team that included her cousin Priscilla Gutierrez of Turlock and sister-in-law Lindsey Stringfellow of Denair. They didn’t end up winning the grand championship (they came in third and just missed making the finals), but the exposure has helped get their name out to the community.

While Stringfellow had originally hoped to have her mobile venture launched by the time the show aired, the coronavirus crisis complicated their opening. But they were able launched the trailer at its permanent site in downtown Denair’s Main Street in late July.

“It feels amazing to finally be open. I think that so many people were looking forward to it. It’s exciting to be opening at a time when people literally just want to go experience a new place to eat because everyone is stuck at home,” Stringfellow said.

Painted bright yellow for maximum visibility (I sense a theme), the 12-foot trailer is serving up Stringfellow’s signature sopes. She modeled the recipes after her favorite sope stand in north-central state of Zacatecas, Mexico, where her family visited every year when she was growing up. Sopes are a traditional Mexican dish made of a thick deep-fried corn masa base that is then piled with a variety of ingredients from refried beans and shredded lettuce to Mexican cheese and a choice of cooked meats.

Stringfellow makes the masa, at least 50 pounds worth, daily. The trailer’s menu includes a chicken con todo sope (grilled chicken, refried pinto beans, queso frescos and house-made salsas), as well as sopes made with asada (steak), chorizo (spicy pork sausage), bean and cheese and just cheese (Carina’s personal favorite) for $3 to $4 each. There is also a quesadilla frita (a cheese empanada topped with fresh ingredients) for $6. Each dish is handmade to order, so please be patient. But the good news is I’ve tried them and they are definitely worth the wait.

The trailer sold out many days, and the partners are hiring two part-time workers to help staff the operation. Hours are currently limited, but the trailer is typically in its downtown Denair spot from 11 a.m. to 8 p.m. Thursday and Saturday (close at 3 p.m. for an hour to prep for dinner). The trailer has been at Dying Breed Brewing in Oakdale and is also available for corporate and special events.

Marijke Rowland writes about new business, restaurant and retail developments. She has been with The Modesto Bee since 1997 covering a variety of topics including arts and entertainment. Her Business Beat column runs multiple times a week. And it’s pronounced Mar-eye-ke.
Support my work with a digital subscription

Motorcyclist killed in crash near Copper Mountain on Monday

The best ways to pass a DOT audit with flying colors