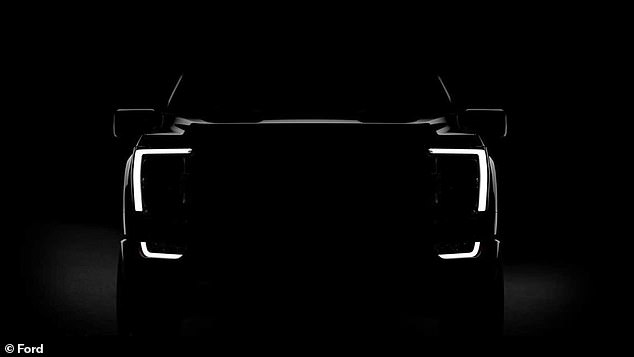 The new Ford F-150 is expected to include an airline-style sleeper seat that will recline all the way back when it is finally revealed on June 25.

Ford Motor Co will next week showcase the next generation of its brawny F-150 pickup truck that will offer the new sleeper-seat feature as well as over-the-air wireless software updates.

The No. 2 U.S. automaker is counting on the 2021 14th generation of the machine to help pay off coronavirus-related debts.

Ford is not taking big risks with the exterior look of the new truck given its sales dominance, instead focusing on improving the interior, according to those who have seen it.

Ford has so far only released this black and white image of the 2021 F-150 which is due to be officially revealed on Thursday. It is rumored the vehicle will feature a sleeper seat 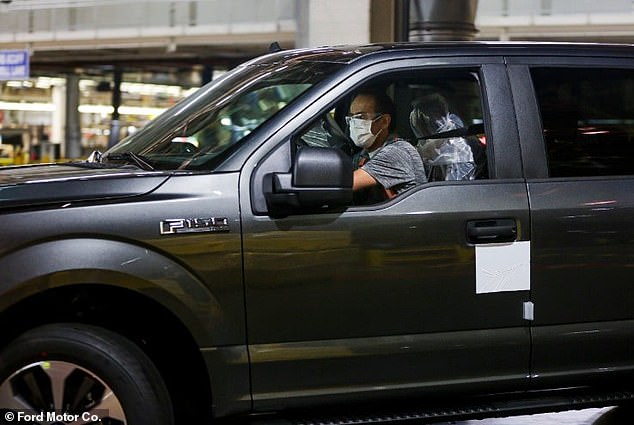 A current Ford-150 coming off the assembly line on May 18. The automaker has ramped back up production following eight weeks of shutdowns caused by the coronavirus pandemic

One prominent feature will be the lay-flat passenger seat like those seen in first-class cabins on some planes, said a person familiar with the plans who asked not to be identified.

‘You can basically live in the truck,’ the person said.

According to Fox, it is not clear if the seat can be used while the vehicle is in motion, due to safety requirements, but could be used for sleeping while parked or for overnight camping.

The over-the-air software eradicates the needs for the vehicles to be brought to a dealership to update key modules controlling the vehicle as it can now be done with wireless technology.

It is expected to bring the technology squarely into the mainstream.

‘It’s really about technology and productivity,’ Chief Operating Officer Jim Farley said at a Deutsche Bank conference on June 10, according to Reuters.

‘Ram taught everybody a little bit of a lesson,’ said Rhett Ricart, owner of Ricart Ford in Columbus, Ohio.

‘The old 5-inch screen for your navigation and radio controls is gone. They’re all going to be 10-, 12-, 15-inch screens. That was started by Tesla.’

The new F-150, part of the best-selling vehicle line in the United States for the past 40 years, accounts for $50 billion in annual revenue and a significant share of Ford’s annual profit.

The new truck, expected to launch later this year, is a critical plank in Farley’s plan to slash $5 billion in warranty costs, speed Ford’s push into vehicle connectivity and add the automaker’s already-strong position in the North American commercial vehicle market.

Ford has borrowed more than $20 billion to ride out the economic shock from the coronavirus pandemic.

Profit from the new F-150 will be key to paying that money back. 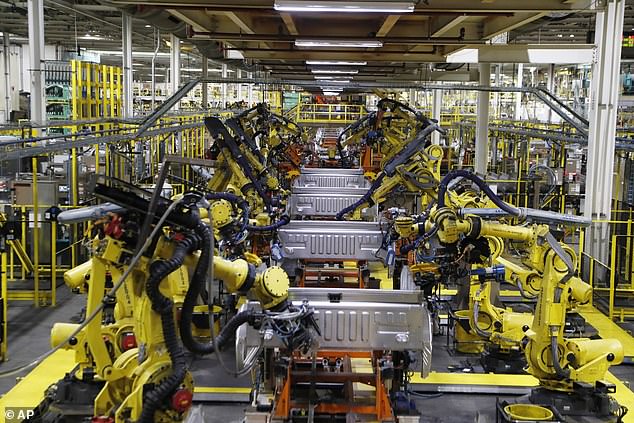 Ford is hoping that profit from the new F-150 will help to pay back the $20 billion the company borrowed to ride out the economic shock from the coronavirus pandemic. Pictured is the Ford plant in Dearborn, Michigan, where the F-150 14th generation will be produced

Ford is scheduled to publicly show for the first time the new F-150 online on June 25 but released a preview Friday as a teaser.

The computer-generated image only showed the darkened profile of the new F-150’s front end and no other features were visible except for LEDs.

A disclaimer with the image noted that the representation is of a pre-production model.

Sales of the current version have remained strong despite its age, and the new model could help Ford hold or even build its position in the segment, said Sandy Munro, chief executive of Michigan-based consulting firm Munro & Associates.

‘If they add the same stuff as what Ram did and if they can add more stuff like Tesla’s doing, there’ll be a gigantic gap between Ford, and Ram and Chevy,’ he said.

The key for Ford will be to avoid the kinds of costly production problems that hobbled the launch of the new Explorer SUV last year.

Ford acknowledged it erred in trying to launch the Explorer and Lincoln Aviator simultaneously while breaking in a new assembly line at its 95-year-old plant in Chicago.

Farley has been visiting the plants in Dearborn, Michigan, and Kansas City, Missouri, that will build the new F-150.

Despite delays related to the virus, he said the launch is in ‘really good shape.’

On Friday, Ford revealed that it would be back to full production capacity in Detroit, two weeks earlier than previously scheduled.

It also announced that it is delaying its first glimpse of the new Ford Bronco to July 13, pushing it back four days from the original plan of July 9.

It came after the company was slammed by Nicole Brown Simpson’s sister over plans to release it on OJ Simpson’s 73rd birthday – 26 years after it became famous as his getaway car amid his double murder charges.

MTA employee handcuffed after crash with Pepsi truck in Midtown –...