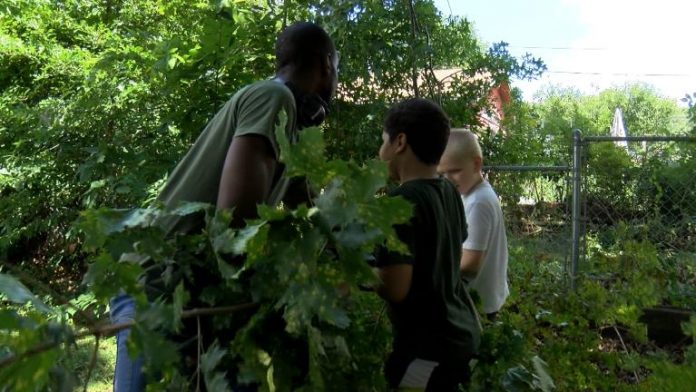 ROCKFORD (WREX) — We’ve all heard the phrase “pay it forward,” but a few people in the Stateline took that phrase to another level.

Tyrone Lewis started volunteering at Miss Carly’s in March. He helped out, then brought sack lunches back to many of the kids in his area.

While he enjoyed helping out, he talked to staff members about his true passion, landscaping. The staff at Miss Carly’s wanted to help him jump start his business, so they bought him a lawn mower.

But Lewis still needed something more to take his business to the next level. Once the jobs started coming in for Lewis, he struggled to get rides to all of them.

That’s when World Class Motors saw that Miss Carly’s wanted to get a truck for Lewis. Owner Pat Phelps wanted to help Lewis take his business to a higher gear with a van and trailer hitch.

“We had a van with a trailer hitch on it, and we thought that it would be a perfect fit for him to get his business started and give a young man a leg up,” Phelps said.

Lewis now brings along some of the kids he brought lunches to on landscaping jobs where he teaches them how to use tools and how hard work is always worth it.

Along with paying the kids for their help, Lewis hopes he can pay it forward by teaching kids lessons early on in life.

“When something is done to you and is extravagant and benefits you in later life, do that same thing, but do it better to the best of your ability, Lewis said.

Crosley Green, imprisoned for 31 years, says he’s the victim of...