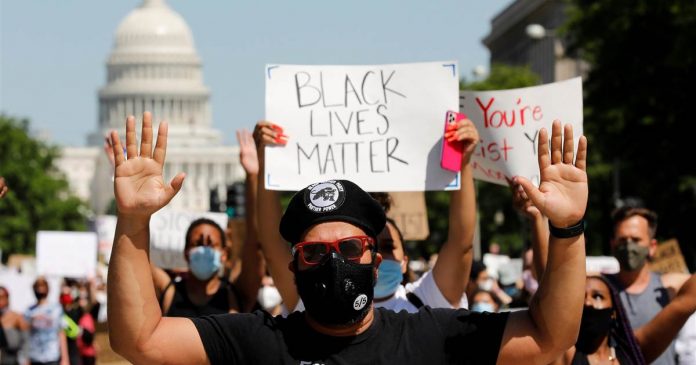 Initially peaceful protests in Philadelphia took on a different tone later Saturday afternoon after a car was set on fire and a crowd tried to gain access to a municipal building in one of many new demonstrations to emerge across the country during the day Saturday — only hours after violence rocked cities coast to coast on Friday night.

A demonstration in Columbus, Ohio, on Saturday led police to declare an emergency.

At the White House, protesters pushed security barricades and could be seen standing on top of Secret Service vehicles.

And, in Austin, Texas, demonstrators gathered in the street in front of officers in riot gear. A photo showed a protester holding a sign that read “your uniform is not a license to kill.”

The demonstrations come days after a video was posted on social media showing a Minneapolis police officer pinning Floyd to the ground with his knee for more than eight minutes as Floyd said, “Please please, please, I can’t breathe.”

Derek Chauvin, the since-fired officer who detained Floyd, was arrested and charged Friday with third-degree murder and manslaughter. Three other officers were also involved in Floyd’s detainment.

The Philadelphia protest on Saturday appeared at first to be peaceful, but video showed a car on fire in the vicinity of demonstrators, NBC Philadelphia reported.

Then, at around 5 p.m., police were seen pepper-spraying a group of protesters who were climbing onto an armored truck near a municipal services building.

Social media posts showed police guarding the building from a crowd of people holding signs with messages such as, “He couldn’t breathe ” and “Justice for the people.”

In Columbus, Ohio, police said midday Saturday that the public should avoid the area of demonstrations that were sparked by the death of Floyd, a black man, in Minneapolis police custody on Monday.

“We are asking residents to avoid the area,” Ginther wrote in a tweet. “Safety of everyone — protesters and police — is paramount. We’re calling for everyone to remain calm.”

A video posted on Twitter showed people running and coughing after Columbus police apparently deployed tear gas at a crowd.

Protesters also gathered in the Ohio cities of Cleveland and Cincinnati during the day Saturday.

A massive crowd gathered outside of City Hall in Cincinnati, some with signs that read “Black Lives Matter” and “Disarm the police.”

Across the country, the Los Angeles Police Department was calling in additional officers and detectives to prepare for Saturday’s expected demonstrations, sources told NBC News.

Shortly before 2 a.m. Saturday a vehicle drove through a police skirmish line downtown, resulting in an officer-involved shooting, they said. At least one person has been arrested. It’s unclear if anyone was injured.

By mid-afternoon Saturday throngs of protesters filled Pan Pacific Park in the Beverly Grove neighborhood of the city, not far from the Grove shopping center.

In New York City meanwhile, a large group gathered outside a police in Harlem. According to NBC New York, protests were planned in all five boroughs.

Following the arrests of more than 530 people during protests in Los Angeles Friday night, the city was preparing for more demonstrations on Saturday, NBC Los Angeles reported.

By mid-afternoon Saturday throngs of protesters filled Pan Pacific Park in the Beverly Grove neighborhood of the city, not far from the Grove shopping center.

And in Des Moines, Iowa, Mothers Against Violence and Stop the Violence organized a demonstration on Saturday morning in which hundreds of protesters chanted “I can’t breathe,” according to NBC affiliate WHO.

The group that organized the protest in Newark, New Jersey — The People’s Organization for Progress —posted a video on its Facebook page showing a large crowd of people calmly walking through the streets of the city’s downtown, also chanting “I can’t breathe.”

Those peaceful protests stood in stark contrast to Friday night’s events, including the death of a 19-year-old man in Detroit after someone in a van fired shots into a crowd of protesters. A police spokesperson said an officer was not involved.

Also on Friday, in Oakland, California, a security officer with the Federal Protective Service of the Department of Homeland Security was killed and another injured after someone in a vehicle opened fire around 9:45 p.m. on Friday, the FBI said.

A number of public officials around the country have condemned the violence. “Go home. You’re not honoring the legacy of Martin Luther King Jr. and the civil rights movement,” Atlanta Mayor Keisha Lance Bottoms said at a news conference. “If you want change in America, go and register to vote.”

The Minnesota governor said the violent demonstrations no longer have anything to do with Floyd or a demand for racial justice. He said the blame lies primarily with people from out of the state who are going to the Twin Cities to commit violence.

Minyvonne Burke is a breaking news reporter for NBC News.

Nicole Acevedo is a reporter for NBC News Digital. She reports, writes and produces stories for NBC Latino and NBCNews.com.

The 10 Best Pants for Overland and Off-Road Travel

Food Rescue Steps Up Swiftly in Response to COVID-19