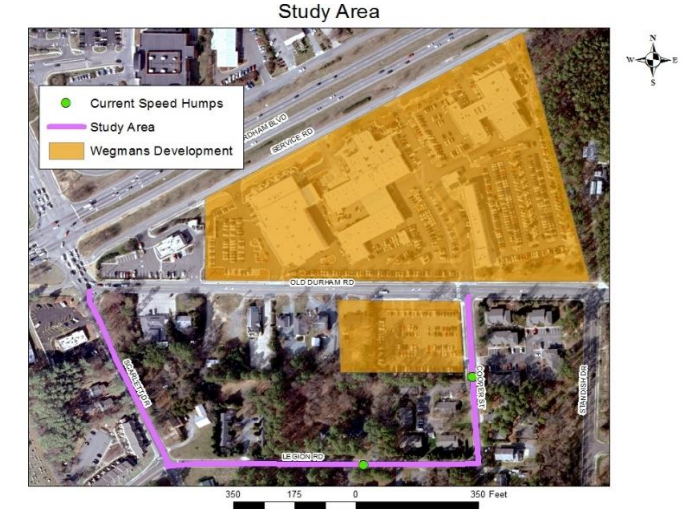 Earlier this week, the Chapel Hill Town Council authorized traffic calming improvements to be implemented around the new Wegmans under construction off 15-501. The main goal of these improvements is to alleviate traffic in the residential areas around the grocery store development.

As part of the Wegmans Special Use Permit, approved by the Chapel Hill Town Council back in 2017, town staff included a stipulation to address traffic concerns on nearby residential streets.

To do this, town staff held several traffic calming meetings with neighbors of the Wegmans grocery store to identify primary concerns and solutions for traffic in the neighborhood. These meetings included a neighborhood walkthrough and three community workshops over the past two years.

After speaking with community members in the residential area around the Wegmans development, town staff found that increased traffic, speeding, truck traffic and sidewalk availability were all big concerns to the surrounding community.

Judy Johnson is a member of Chapel Hill’s Planning Department. At the town council meeting on Wednesday, she gave a presentation on what traffic calming measures are recommended to address and alleviate these community concerns.

Main items of the traffic calming plan include the installation of several all-way stops, electronic speed indicators, crosswalks and an ordinance for no through truck traffic.

More specifically, the town recommends the installation of a “No Through Trucks” signs on Garden Street, Legion Road Extension, Standish Drive, and Scarlett Drive. Johnson said a traffic diverter will also be placed on Old Durham Road to reduce some traffic conflict. 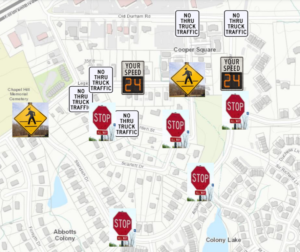 Location of traffic calming measures to be implemented around Wegmans. (Photo via Town of Chapel Hill)

Stop signs and “No Through Truck” signs are expected to be installed within two weeks. Other traffic devices such as electronic speed display signs and crosswalk markers will be installed prior to Wegmans receiving its Certificate of Occupancy.

“We would then move into a Phase 2, where we would be monitoring the traffic following the opening of the store,” Johnson said “We’re going to give it a couple of months, probably up to six months, and then do traffic counts again on the road to access the impacts of traffic and look at what our traffic calming efforts have done.”

For more information on what was discussed at Chapel Hill’s latest town council meeting, click here.

Chapelboro.com does not charge subscription fees. You can support local journalism and our mission to serve the community. Contribute today – every single dollar matters.