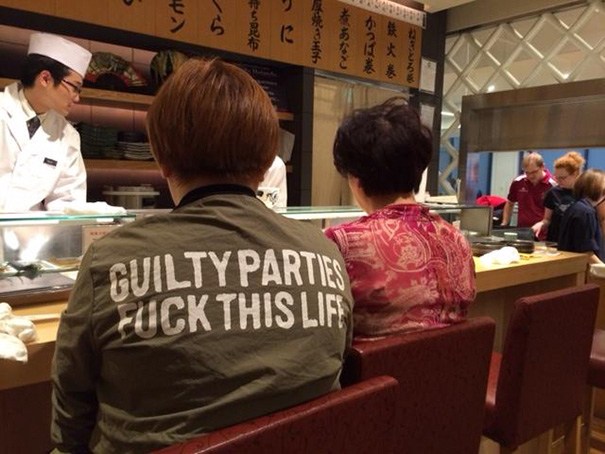 I’m not intentionally picking on Florida; Florida really just picks on itself. Far be it for me to single out any one state for humiliation, but it seems like that state has more per capita cooks and ingrates than the rest of the U.S. combined. How all those people ended up so messed up and in Florida… I mean, they weren’t that way when they all came over from France.

The reason I cringe to pick on Florida is that chances are someone is from there, and that someone could be one of our readers! Were it narrowed down to a single city, it would be Seattle or Minneapolis. On the other hand, were we to expand to the national scope of humiliation, there you have a no-brainer — Chiner! I sometimes wonder how my clothing line would sell in Florida…

The nutshell is that this bloody dude steps onto the highway, slows down the truck, jumps on it hanging on like a madman, then starts smashing the windshield with a metal object. The diver panics, speeds up, and starts swerving wildly trying to shake the lunatic off. That alone makes the video a worthy watch.

Another question that comes to mind rather quickly — beyond the obvious one — is what… what in the high-desert savannas of western Tarnation is that guy wearing?? Right? WTF? Something I wouldn’t wear to get up to pee in the middle of the night even if I didn’t turn any lights on. My guess — and I surely am no expert — is that something went pear-shaped during an amorous engagement with a local iso-gendered gentry of incidental leisure. If Ice-G swung that way, he might then consider wearing those clothes.

Anyhoo, the (funded) State Troopers caught up to this… grotesque episode… and whisked the… gentleman… to the hospital for some industrial-scale welterweight evaluation. Actually, I’m sorry but I’m taking the title “gentleman” back. Any fool who would jump on top of a tractor-trailer and smash out the window wearing that catch-me-phuq-me outfit is not a gentleman. If you’re sick-n-tired of assed-up people raise your hand with me now and say: “I am”!

When we were kids my brother and I once took some 4″ x 6″ rectangles of paper, colored them green, and wrote: “One Dollar” on them. We took our “dollars” to the Base Exchange and tried to buy a model airplane with them. We sailed through the exit airborne never to be allowed to come back. But that was like, 52 years ago. So how then should that same concept work today for a $142,000.00 Porsche and three gold Rolex watches? I feel you, dawg!

The Porsche dealer should have been alerted since the check read: “Security First Trust and Federal Reserve of Casey.” I can hear the manager snapping at the salesman:

“Dad-blame it, Haskel… this is coming out of your paycheck!”

The salesman should have been tipped off when Casey took the car for a test drive and gave him an Arkansas State driver’s license. How do they say — this is why we can’t have nice things? Listen, the guy bought the car ok, but then the greedy gourmand decided he badly needed a gold Rolex. And then that he actually really needed three gold Rolex watches for his exquisite self. The watch dealer busted him.

This asshat’s vanity tractor has chains on its tires. He really feels like he deserves those things. He’s just sure that chicks dig Porches and men who wear three Rolexes at a time. He probably puts on three Polo shirts and pops all three collars.

Wealth and greed are a curious thing. If I have a billion dollars tomorrow I wouldn’t buy a single gold Rolex watch — I’m semi-retired; I don’t need a watch. And by the same token, I would not rush out and buy pairs and pairs of Docker slacks; my sweats with the holes in them support my endeavors just swimmingly. Greed… I’m just glad I don’t understand it.

As an aside, some of the men in my Green Beret unit used to purchase fake Rolex watches in Itaewon, Korea for just pennies on the dollar. That gave an occasional rise to the question:

What’s worse than a Karen? A whole pack of truculent Karens gathering to protest their perceived right to not wear a mask. This $hit again? Here’s how the liberal mind works: They were refused entrance to a grocery store because “they live in America,” and “they have constitutional rights…” That crap again.

And holding up a sign: “My Body My Choice”… wasn’t that an abortion slogan? Karens sure know how to ratchet up some drama; really squeeze every last drop of blood from a rock.

Speaking of Karens and maskholes, treat yourself to this video of this brother who literally made a CO2-driven pistol that successfully shoots a surgical mask on a face from over 10 feet away!

Ever been out in public and seen two people pissed off at each other and then they just stand there videoing each other with their phone cams? What does that do? What does it mean? Why is that even a thing??

We had licking toilet seats and kids died from that. Why then shouldn’t we have busted a cap in one’s cock? These moronosaurus rexes don’t need to sire more jackasses anyway. To set the story straight, this inflamed boil on the buttock of the Earth was engaging in a fad whereby dudes (mostly) take photos of them pointing gats at their gonads and look all gangsta.

This turd did it with a loaded gun and “it went off” punching right threw his scrotum. If one of y’all won’t say it, I will:

“I’ll bet he won’t have to balls to try that again.”

These people all think they deserve sympathy after the fact. He dashed to the hospital:

Turd: “I did; I shot myself in the scrotum taking a gangsta photo!”

I have been searching and finally found a Chinese T-shirt that is both stupid and in Chinese. In the photo above the brother sitting on the ground has the words “For Rent” printed on the back of his shit. It’s not that the guy is for rent; he’s just trying to be funky-fresh hip-hop cool OG American. Well, his shirt makes him look like a huhantic fool, and he does have the stupid part down cold, so… pretty American.

Meet Cock. This is Cock, mother of two and housewife from Guang Dong, Chiner.

“Well, girls… you must both be very proud of Cock!”

“Yes, we all love Cock very dearly at our house.”

It’s all well and good, as the father is a big pussy anyway; at least he was when he came over from France. He’s probably one of those people with the “floating gender” who switch several times a day to suit his advantage in today’s gender dysphoric dystopia.

Everyone that ever stood behind this woman at a bank or Tasty Fleeze has kicked her ass. She goes through every day all day long from on ass-kicking to the next and has no clue why. She would fare much better with one of those “I’m Cock” Tees.

Relax; there is no copyright issue here. This brother is on record under the name of Baet Simpson. Furthermore, the American Bart Simpson’s catchphrase is “Don’t have a cow, man.” He has never been heard saying: “Don’t have a box new.”

geo’s Pun Meme of the Week:

“It is foolish and wrong to mourn the men who died. Rather we should thank God that such men lived.” General George S. Patton

By Almighty God and with honor,
geo sends

Make-A-Wish annual truck convoy to be held virtually on Aug. 16